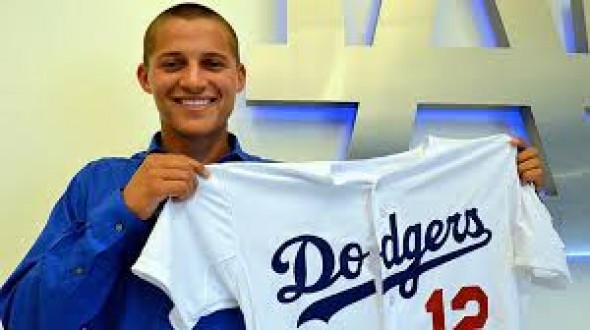 Corey Seager, according to Dodgers manager Don Mattingly, is almost ready for the big time. / MLB.com

Dodgers manager Don Mattingly is not bashful about talking up Corey Seager, the younger brother of Mariners All-Star third baseman Kyle Seager. The 20-year-old is among the hottest prospects in the Cactus League.

“The whole package has been good,” Mattingly told MLB.com. “He has a chance to be special.”

Mattingly said he’s not reluctant to put him on the major league roster.

While Mattingly said every Dodgers prospect will benefit from a step-by-step progression through the farm system, he also said — “without putting a giant hex on his back” — that Seager profiles as a big shortstop like Cal Ripken with a small swing like John Olerud.

There’s no rush. The Dodgers traded for veteran Jimmy Rollins to replace Hanley Ramirez. But Rollins is on a one-year deal.

“You want to make sure he fully develops,” Mattingly said. “There’s more for him to pick up. If the situation was different, I’m not sure you wouldn’t just throw him in and let him play and get the experience here. But that’s not the situation here.”

“Talking to Andrew (Friedman, president), we want to give them the best chance to develop so it’s not a back-and-forth thing (to the minor leagues). They all like to get here quick, but you run the risk of cutting corners and that can set a guy back.”

MLB.com lists Seager as the top prospect in the Dodgers system and No. 7 in MLB. Seager had a walk-off RBI double to win Sunday’s exhibition game against Milwaukee.

The winning run at Peoria Stadium came home in the ninth when D.J. Peterson’s sacrifice fly brought home Ketel Marte, who opened the inning with a triple. Chris Taylor, who started at second base, also had two hits

Danny Hultzen, continuing his comeback from two years of injuries and rehabs, will get a turn Tuesday against Colorado after Felix Hernandez opens the game.

Robinson Cano is expected back at Mariners camp Friday after attending funeral services for his grandfather in the Dominican Republic.

Cano played five games for Estrellas De Oriente in the Dominican Winter League over the offseason so he could play in front of his ill grandfather, who was able to come watch him in their hometown of San Pedro de Macoris.

The Mariners signed Kevin Correira, a right-handed pitcher and 12-year MLB veteran with five teams, to a minor league contract Monday. Correira, 34,  pitched in nine games in 2014, including three starts with the Los Angeles Dodgers. He began last season in Minnesota, where he made 23 starts. He combined for a 7-17, 5.44 mark in 32 games, 26 starts, overall in 2014.

The Mariners are consolidating their Latin American developmental program into their new baseball academy in the Dominican Republic and will no longer field a team or operations in Venezuela, the club announced Monday.

“Our plan all along has been to centralize our efforts,” said Mariners general manager Jack Zduriencik. “By bringing our operation under one umbrella, we will be much more efficient and effective in the development of young players.”

Angels superstar Mike Trout has met his enemy: The high fastball. Sports on Earth explains what he plans to do about it.

Ex-Mariner pitcher Cliff Lee, 36, may be staring down the end of his career, writes MLB.com.

If you missed it, here’s the account by The News Tribune’s Bob Dutton about Rickie Weeks’ ginormous home run over the weekend.