Thiel: Seahawks learning from their pain

Not only does the trade for Graham upgrade production at two spots, the trade of Max Unger and the first-round pick saves nearly Graham’s salary. Now, on to the offensive line. 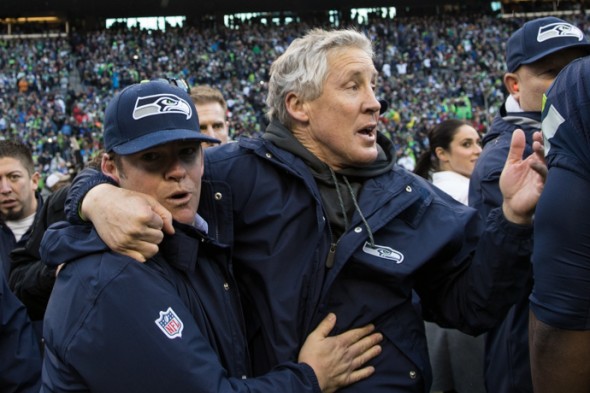 Let’s get the mass public sentiment out of the way right now: “Pete! You made a great hire — one pass too late!”

Fated to have almost every maneuver this off-season observed through the prism of The Play That Cannot Be Unseen, the Seahawks addressed it straight up as only Pete Carroll and John Schneider can — by throwing exclamation points at it.

The startling acquisition of premier TE Jimmy Graham from New Orleans Monday solves for the short slant pass problem. After seeing 3,756 photos of WR Ricardo Lockette being knocked off the final pass of the Super Bowl by a smaller defensive back, Carroll and Schneider determined that crap won’t happen again.

Schneider, in an interview with the NFL Network Monday afternoon, was asked what he liked about the 6-7, 260-pound Graham.

Because of the injury absence of do-everything TE Zach Miller, now cut, for the final 13 regular-season games and three postseason games, the Seahawks didn’t have either size or a veteran weapon of strength in the passing game.

They got away with it until the last play of the season, when they threw an ill-fated pass to a skinny guy who’s best in the open field, not in traffic. The real issue on that much-debated play was less about the choice of pass or run, and more about the choice of receiver.

The Seahawks wanted to fix the red zone fluffs so much they gave away their anchor and leader in the offensive line, C Max Unger, a 67-game starter, after already losing the left guard, James Carpenter, to the New York Jets in free agency.

They obviously were impressed with unheralded backup center Patrick Lewis, who started the Arizona game in which the Seahawks had a club-record 596 yards of total offense. Whether Lewis is seen as the best solution isn’t known, nor is clear whether third-year Alvin Bailey is the answer at guard.

What is clear, however, is the Seahawks now have a way to complicate the life of NFL defensive coordinators by relying more on the two- and three-tight end sets that Carroll loves, by having tight ends for all occasions.

“He plays big, makes plays in a crowd, makes plays on top of guys, is a very effective player in the red zone,” said Carroll on a conference call with reporters. “We’re going to fit it into our offense and make him a very obvious complementary part of it.

“Your best players always help your other guys play well and be productive. That’s what we’re hoping for.”

Lost in the Graham acquisition was the return over the weekend of TE Anthony McCoy, a top-end blocker. Remaining on the roster are TEs Luke Willson, who can play more H-back/fullback, and TE Cooper Helfet, whose speed is a matchup problem.

As a group, which included midseason pickup Tony Moeaki, Seahawks tight ends accounted for 757 yards on 48 catches, a 15.8 yards-per-catch average, including 16 that went for 20-plus yards, with six touchdowns.

That’s actually good production, until compared with Graham’s numbers with the pass-happy Saints: 85 catches for 889 yards and a 10.5 ypc average, with 10 touchdowns.

He won’t ever match those numbers in Seattle. But the difference is Graham can also be moved into the slot or outside, drawing a double team wherever he lines up. That means the Seahawks can have other tight ends in on the same play to do what they do best, while Graham provides the biggest target in the football life of QB Russell Wilson, who is already a master at the play-action fakery that makes defenses lose a beat.

But not so hard to afford.

One temporary help for Seattle in this transaction for 2015 is that Graham’s contract — four years and $40 million, signed in July — calls for an $8 million cap hit. But in a trade, Unger’s cap hit of $4.5 million goes with him. Plus in trading away the first-round pick, that gets them out of an obligation for 2015 of more than $3 million.

Had the Seahawks acquired top free agent TE Julius Thomas, as was rumored, they would not have come away nearly as affordably.

That’s crucial in having to play top dollar for three difference-making offensive players in their primes — Graham, Wilson and RB Marshawn Lynch. If we assume for argument’s sake that Wilson gets an an extension that will pay him $20 million in 2015, adding that to Graham’s $8M and Lynch’s $12M makes $40 million tied up in three offensive plsyers.

That’s huge, and it means little room for expensive offensive linemen. The Seahawks have to figure a way to get it done with young guys.

But then there’s this to think about: After the first day of free agency, the Seahawks have done major repair work to three areas of need — tight end, wide receiver (Graham takes care of both) and cornerback. The Seahawks over the weekend hired two free-agent corners, Cary Williams from Philadelphia and Will Blackmon from Jacksonville, that will go a long way to fill the absence of Byron Maxwell, and the uncertain futures of the injured, Jeremy Lane and Tharold Simon.

It’s one of biggest transactional days the Seahawks have had since . . . well, the Percy Harvin trade two years ago nearly to the day.

Yeah. That was a celebratory day for the Seahawks too.

Asked about that Monday, Schneider was reticent, finally saying:

“We learned from our previous trade for Percy.”

But with consecutive Super Bowl appearances on the resumes, it’s fair to assume Carroll and Schneider are unlikely to repeat mistakes.