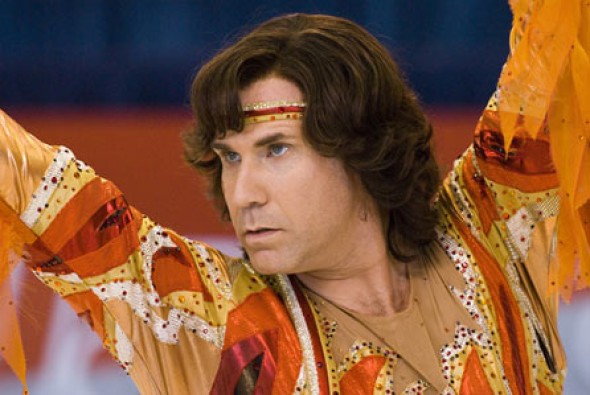 Will Ferrell will trade in his ice-dancing uni for a Mariners costume Thursday in Mesa, AZ. / Wiki Commons

In their mostly dubious history, the Mariners have been the unintentional object of much mirth. Thursday at HoHoKam Park in Mesa against the Oakland A’s, Mariners humor will be deliberate, thanks to comedian Will Ferrell.

As part of filming a new special for HBO’s Funny or Die, Ferrell will attempt to play — with Major League Baseball’s approval — all nine positions in five Cactus League games involving 10 teams.

The project will be a fundraiser for Cancer for College, a charity begun in 1993 that helps individuals adversely affected by cancer to realize their dream of a college education. Ferrell is dedicating the show to Bert Campaneris, who played all nine positions for the Kansas City Royals in a Sept. 8, 1965 game against the Angels. He will be on hand Thursday.

In a statement released by the Mariners, GM Jack Zduriencik is quoted as saying, “I’ve spent my entire career, including since my arrival in Seattle as general manager, looking to identify and procure talent. I can say with confidence that I’ve never scouted a talent like Will before.

“At first it was difficult for me to project a big league position for him, but as I considered the balletic grace he showed on the ice in Blades of Glory, the raw athleticism on the court in Semi Pro, and the burning desire to win – who can forget his credo: “If you’re not first, you’re last” – in Talladega Nights, it became clear to me that he should be a middle-of-the-field player.”

Ferrell will open at second base.

Game-used memorabilia from Ferrell’s journey will be auctioned online later in the year on MLB.com with proceeds donated to Cancer for College as well as Stand Up To Cancer, a groundbreaking initiative created to accelerate innovative cancer research.  MLB is the founding donor of Stand Up To Cancer.

The HBO special will air later this year and also feature MLB players, managers, coaches, executives and fans. Ferrell’s adventure can be followed live and on-demand throughout the day across MLB Network, MLB.com, (CLUB.com) and the official accounts on social media platforms.

Hultzen does well in return

Danny Hultzen pitched only an inning, but it was a milestone moment in his return to a major league mound for the first time since Sept. 1, 2013. After walking leadoff batter Troy Tulowitzki in the fourth inning Wednesday against Colorado at Peoria Stadium, he induced two ground balls, the first for a double play.

Hultzen is expected to pitch most of the season in AAA Tacoma.

His inning, and Kyle Seager’s solo homer, was about it for the Mariners as reliever Lucas Luetge blew up in the ninth inning of a 4-1 loss to the Rockies. Luetge gave up three runs on three hits.

Jordan Pries gets his second start  Thursday in the Mesa game. J.A. Happ follows on Friday in a home game against the Brewers, followed by Taijuan Walker‘s third start of the spring on Saturday.

Three-time All-Star Yu Darvish is going to get a third opinion on his elbow, but it’s likely the Texas Rangers star will undergo Tommy John surgery and be lost to the Rangers until early 2016.

Felix Hernandez tells Tracy Ringolsby of mlb.com that he didn’t watch a single minute of the MLB postseason that he nearly played in for the first time. He was on vacation in Europe, and couldn’t get a decent TV connection.

Golden State Warriors star Klay Thompson, a former Washington State star, took in the Chicago White Sox’s game in Surprise to watch his brother, Trayce, the No. 14 prospect in the club’s farm system.

Jason Churchill at 1090 The Fan says that it’s not illegal to keep both Brad Miller and Chris Taylor on the final roster, but the Mariners would have to cut Willie Bloomquist and eat his $3 million deal.

Alex Rodriguez hit his first homer of the spring. Drug tests not yet available.