Cyler Miles will miss his second consecutive spring practice as he deals with personal issues, according to a statement Friday from coach Chris Petersen. 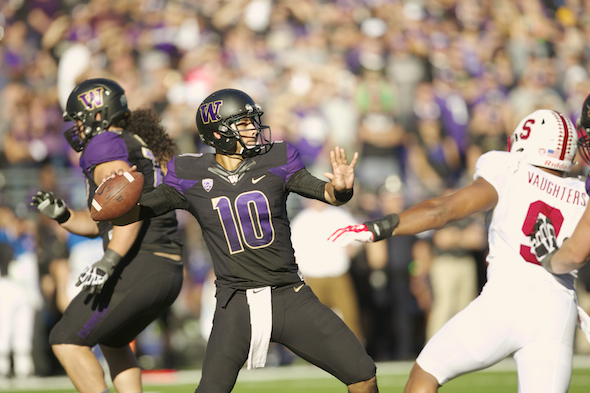 Washington redshirt junior QB Cyler Miles has taken a voluntary leave of absence from the football program and will skip spring practice, coach Chris Petersen said in a statement released Friday by the school.  The statement said the decision was based on personal reasons, not a discipline-related move, and he will remain enrolled in school.

“Cyler is dealing with some things in his life that are more important than football, and he felt was important to take some time away from the game,” Petersen was quoted as saying in the statement. “We are working to support him in any way we can and hope he returns back to the football field soon.”

The decision follows a tumultuous 2014 for Miles, which also included missed spring practice after he was suspended for his involvement in altercations with partiers celebrating the Seahawks’ Super Bowl win Feb. 1.

Although he was not charged with a crime, Miles, from Centennial, CO., was seen on video wading into a celebration wearing a Broncos hat. His then-teammate, Damore’ea Stringfellow, was charged with misdemeanor assault and subsequently transferred from Washington.

The suspension included the first game of the season, but after that, Miles started 12 of the final 13 games as the Huskies finished 8-6 in Petersen’s first year succeeding Steve Sarkisian, who recruited Miles.

Miles was inconsistent early but finished strong, passing for 249 yards, two TDs and one interception in a 25-for-39 day in the Apple Cup win over Washington State, and for 268 yards (25-for-38) a TD and a pick in the Cactus Bowl loss to Oklahoma State.

His season completion percentage of 66.6 percent was second in school history, and his 142.4 passing efficiency was sixth all-time.

Spring practice begins March 30 at UW and concludes April 25 with the Spring Preview at noon at Husky Stadium.

The statement said university officials, coaches and players will have no further comment on Miles.