Brad Evans, new to the back line this season, made errors on all three goals as San Jose surprised the Sounders, even playing the final 32 minutes a man down. 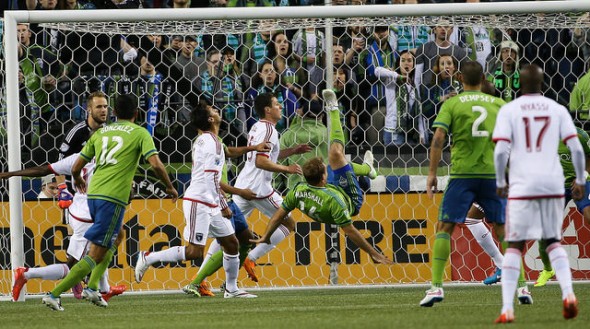 Chad Marshall needed a bicycle kick to clear a ball from San Jose pressure Saturday night at the Clink. / Sounders.com

Making his second start at center back, Evans made errors on all three scores as San Jose, winless in its past 16 games, upset the Sounders 3-2 Saturday night and stunned a Clink crowd of 39,175 that a week earlier was thrilled with a near-perfect win against a top-end New England team.

What proved to be the game-winner came in the 70th minute when Innocent Emeghara executed a give-and-go, then faked Evans to the ground for a one-hopper past GK Stefan Frei and a 3-1 lead. The Quakes had the second fewest goals (35) in MLS last season, but found Evans and the Sounders defense inviting.

Obafemi Martins pulled one back in the 84th minute with a short tap-in from Andy Rose. Despite a furious attack in the final 11 minutes, new goalie David Brigham withstood the barrage.

Making the defeat more galling was that the Earthquakes played a man down when defender Victor Bernardez in the 52nd minute was given a straight red card for kicking Michael Azira.

The opening moments couldn’t have gone better for the Sounders, who were playing without head coach Sigi Schmid, attending the wedding of a son, and Ozzie Alonso, still recovering from pre-season groin surgery.

At 18 seconds, Clint Dempsey scored the fastest goal in club history, and the sixth-fastest in MLS annals, after Tyrone Mears blasted from distance. The shot caromed off Bingham’s hands and one-hopped to Dempsey, who went to his knees with a header that bounded easily inside the far post.

Turns out that was the high point.

Chris Wondolowski, a member of the U.S. Men’s National Team and longtime Sounders nemesis, tied the game at one in the 13th minute. He took a long cross from Marvell Wynne and, after Evans mistimed his jump in a failed attempt to clear the ball, put a hard shot past Stefan Frei.

He did it again in the 48th minute for his ninth career goal against the Sounders, most by a Seattle opponent. Evans, in the box, attempted to clear a ball with his head back to Frei, but whiffed. Under full steam, Wondolowski blew past Evans and easily beat Frei one on one from 10 yards.

Bernardez’s ejection came four minutes later, but instead of helping the Sounders, it seemed to give life to the Quakes (1-1), who had gone nearly 500 minutes without a goal before Saturday. They made 46 clearances, and the Sounders were repeatedly thwarted by their own near-misses.

“There was no rhythm or flow to this game,” said Brian Schmetzer, the Sounders’ top assistant who subbed for Schmid. “It came down to individual mistakes.”

The Sounders have two weeks free of MLS play before traveling to Dallas March 28. On March 24 is an international friendly at the Clink with one of Mexico’s premier teams, Club Tijuana.