No. 2 seed Gonzaga plays No. 15 North Dakota State Friday at KeyArena and No. 13-seeded Eastern Washington plays No. 4 Georgetown Thursday in Portland. 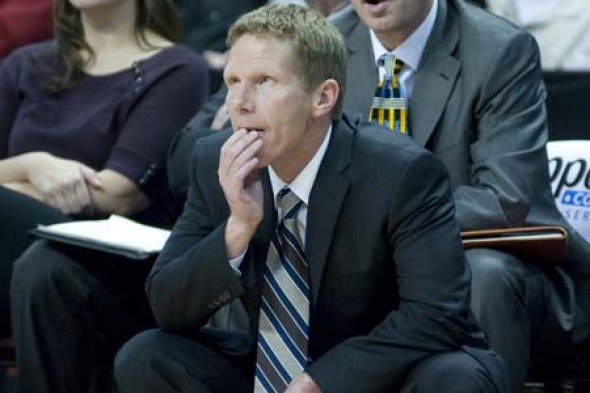 SPOKANE – Death, taxes and Gonzaga goes Dancin’ in March. It’s comforting to know there are some things in life that are as reliable as an Alex Rodriguez lie.

In reality, Gonzaga has advanced to college basketball’s Big Dance “only” 17 years in a row. And Mark Few has “only” been head coach of 16 consecutive Dance teams. Of course, when you’ve “only” been a head coach for 16 years in your life – we’re not counting those Oregon high school jayvee teams, Mark — that’s not too shabby.

Gonzaga basketball qualifies as an amazing success story by almost any measure but one – NCAA tournament victories. Gonzaga’s all-time record is a lukewarm 19-17. For five years running, the Bulldogs have gone 1-1 and fallen one win shy of the Sweet 16. Only once — in 1999, four years after their only previous tournament appearance – have the Zags made it as far as the Elite Eight.

This, however, is the year Gonzaga is headed to the Final Four and maybe, just maybe, wins it all. That’s what Gonzaga supporters want you to believe, anyway. They haven’t felt so strongly about their team’s chances since way back in . . .  2013, when the only Gonzaga team ever ranked No. 1 or seeded No. 1 barely beat 16th seed Southern (LA.), then lost to No. 9 seed Wichita State.

On Sunday, the tournament selection committee sent Gonzaga (32-2) to Seattle as the No. 2 seed in the South Region. The Bulldogs open Friday against No. 15 North Dakota State (23-9) at KeyArena.

Gonzaga players certainly weren’t shying away from that kind of talk when they met with the media after the tournament bracket came out Sunday afternoon.

“When we play our best,” former Kentridge High School star Gary Bell Jr. said, “we feel like no other team can play with us.”

Kentucky transfer Kyle Wiltjer added, “If we just play our game and play hard, then I don’t think anybody can beat us.”

Wiltjer’s opinion carries some weight, since he was a freshman reserve on Kentucky’s national champions in 2012. This year’s Wildcats are 34-0, seeded No. 1 overall and the 1/1 favorite in Las Vegas to win it all. Gonzaga has the seventh-best odds at 22/1.

The short trip to Seattle and KeyArena certainly figures to aid the Bulldogs. Gonzaga has scheduled a game at the arena every season for 10 years, and the Zags are 3-1 in NCAA tournament games played there. Gonzaga’s fans travel extremely well.

Gonzaga isn’t the only Washington team in the 68-game field. The Big Sky Conference champions of Eastern Washington are tourney-bound for only the second time in the Eagles’ 32 years in Division I.

That’s the good news. The bad news is that Eastern (26-8) is seeded 13th in the South Region and opens against No. 4 Georgetown (21-10) Thursday at the Moda Center in Portland. The worse news is that Big Sky teams are 0-33 in the tournament since 1982.

If Gonzaga and Eastern Washington win their first two games, they would meet in the Sweet 16 in Houston next week.

First things first, starting with Gonzaga and North Dakota State. The Bison are younger and smaller than the Bulldogs and prefer to hold the score down. Both teams have quality 3-point shooters, including Summit League Player of the Year Lawrence Alexander. The Bison’s lone senior averages 19.4 points per game.

Few described Alexander as “a great guard.” The coach also said, “I’m impressed with North Dakota State in that they won their league (tying South Dakota State for first in the regular season) and their tournament. That’s a really, really tough thing to do.”

Few should know, since his team won the regular-season and tournament championships in the West Coast Conference for the third year in a row. Of course, no one has ever confused the WCC and the Summit League with elite conferences.

Eastern Washington and Georgetown have distinctly different playing styles. The Eagles love to run, gun and hoist 3-pointers. The Hoyas are a typical Big East Conference team in that they’re big, physical and much prefer to jam the ball down opponents’ throats rather than take jump shots.

Joshua Smith, a 6-foot-10, 350-pound mountain of a man out of Kentwood High School, averages 11.1 points and a team-high 5.9 rebounds for the Hoyas. The only other Georgetown player scoring in double figures is junior guard D’Vauntes Smith-Rivers. The lone All-Big East first-team pick on the Hoyas, Smith-Rivers averages 16.2 ppg.

Eastern trailed by 11 with six minutes left in the Big Sky tournament title game Saturday night before rallying to beat host Montana, 69-65. The Eagles might not have made it into a post-season tournament otherwise.

“It was an improbable comeback,” Eastern coach Jim Hayford said, “but it just shows the character of this team.”

Facts and figures: Few teams can match Gonzaga’s depth, size, scoring balance and inside-outside scoring capability. Super sub Domantas Sabonis (9.5 ppg, 6.9 rpg, 67.7 FG pct.) is projected to go late in the first round of the NBA draft this year, but the freshman forward says he’ll stay in college at least one more year. Sabonis loves to get physical under the basket along with 7-foot-1, 288-pound C Przemek Karnowski (11.0 ppg, 5.8 rpg). The Bulldogs lead Division I in field-goal shooting percentage at 52.4. They rank ninth in scoring (79.1), 12th in field-goal shooting percentage defense (38.4), 14th in rebound margin (7.2), fifth in assist-turnover ratio (1.56) and fifth in 3-point shooting percentage (40.8).

Trivia time: North Dakota State, a No. 12 seed last year, upset No. 5 Oklahoma in second-round action at the Spokane Arena, located a couple deep 3’s west of the Gonzaga campus.

Facts and figures: The Hawkeyes were on a roll before getting stomped by Penn State at the conference tournament. White made third-team all-conference.

Trivia time: Iowa is 0-4 at neutral sites this season.

Facts and figures: The Wildcats’ outstanding backcourt is keyed by Kainoski, the Atlantic 10 Player of the Year. Davidson ranks sixth in the country with 79.9 ppg.

Trivia time: Current Golden State Warriors star Stephen Curry helped little Davidson knock off Gonzaga, Georgetown and Wisconsin before losing to Kansas in the 2008 Elite Eight. As this year, the Wildcats were a 10 seed that season.

Facts and figures: The Panthers aren’t flashy, but they can be deadly efficient at both ends of the floor. Tuttle, part of a beefy front line, won the Larry Bird Player of the Year Award in the MVC. He’s a finalist for the Wooden Award as national player of the year.

Notable numbers: Tuttle is the only UNI player averaging more than 7.7 points or 26.2 minutes. However, eight players average at least five points and 13 minutes.

Facts and figures: The Cowboys won their first Mountain West tournament title by knocking off San Diego State 45-43. Yes, 45-43. Wyoming ranks eighth nationally with 56.0 points allowed per game and 308th out of 345 Division I teams in scoring at 61.7.

Facts and figures: Louisville is big and athletic, but lacks shooters and depth. Point guard Chris Jones, the team’s third-leading scorer, pleaded innocent on rape and sodomy charges after being kicked off the team last month.

Trivia time: The Cardinals shoot just 42.9 percent from the field and have only three active players averaging more than 3.3 ppg.

Facts and figures: The kids from Orange County are making their first trip to the NCAA tournament. It could be tough staying for long without a dominant offensive player.

Facts and figures: Harvey leads the nation in scoring and 3-pointers per game (3.9). The Eagles rank among the busiest and best 3-point shooting teams – they launch nearly 25 a game and hit 40.3 percent – and they’re third in scoring at 80.8. Defense? Well, only when they’re in the mood. Eastern ranks 324th among 345 Division I teams with an average yield of 73.6 points. That’s with teams like Walla Walla and Eastern Oregon on the schedule. Eastern did notch a win at Indiana, and now they’re headed to the NCAA tournament for just the second time in 32 years in Division I. The Eagles’ only previous trip came in 2004. Eastern takes on 23rd-ranked Georgetown on Thursday (6:57 p.m., truTV).

Trivia time: Jois is one of three Australians and six foreigners among the 11 healthy players on Eastern’s active roster.