Should the Seahawks make a run at Greg Hardy?

The Seahawks could probably sign DE Greg Hardy on the super cheap, given his various problems. But should they pursue the troubled defensive end? Vote here. 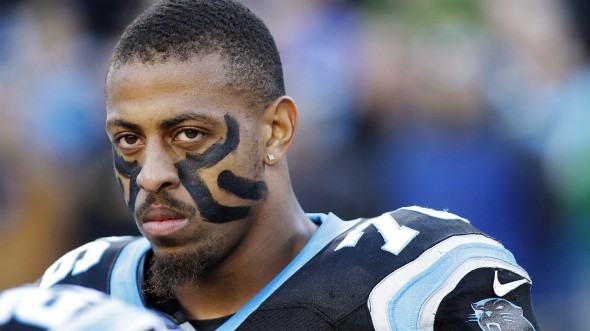 Greg Hardy is a sack master, but should the Seahawks pursue him? / Carolina Panthers

If CBSSports.com and other reports are to be believed, the Seahawks and Dallas Cowboys will be the final suitors for defensive end Greg Hardy, a gifted sack specialist who spent most of last season on the commissioner’s exempt list and is facing a suspension of up to six games for a domestic abuse incident a year ago.

The 6-foot-5, 275-pound Hardy played in one game for the Carolina Panthers in 2014 before he was convicted in a bench trial of assaulting and threatening his ex-girlfriend. But the case was dismissed Feb. 9 after Hardy asked for a jury trial and his accuser, former girlfriend Nicole Holder, refused to cooperate with the district attorney’s office and failed to show for court.

According to SB Nation, “On June 15th, 2014, Hardy was convicted of assaulting his partner Nicole Holder. He exercised his right for an appeal after he denied the claims against him by Holder. It was alleged that Hardy flung her into a bathtub after throwing Holder on top of his bed, (which was coincidentally filled with guns), and choking her . . . There are rumors that a financial settlement was made.”

Hardy denied all allegations made by Holder and said she became angry when he refused to have sex with her.

Hardy is a Tennessee native who played college football at the University of Mississippi. The Panthers selected him in the sixth round of the 2010 draft after his stock dropped dramatically following an unimpressive performance in the Indianapolis combine.

Hardy was deactivated after the first week as his legal issues played out and heat surrounding domestic violence in the NFL intensified. On Sept. 17, Hardy agreed to be placed on the commissioner’s exempt list. He did not play for the rest of the season.

Prior to the case, Hardy had been an extremely productive player. He had 18 sacks in his first three seasons before breaking out with 59 tackles and 15 sacks in 2013. In his last three full seasons, Hardy produced sack totals of 13, 14 and 15.

But Hardy packs such baggage that both the woebegone Oakland Raiders and pass-rush needy San Francisco 49ers won’t have anything to do with him, considering him toxic.

“At this point we don’t have any intentions of doing anything with him,” Raiders GM Reggie McKenzie told CSN Bay Area. “His situation is a delicate one. He has something ongoing with the league also.”

“There’s been no contact with Greg Hardy or any representative of his,” 49ers GM Trent Baalke said. “There is no interest that we’ve shown, nor will we show, in bringing Greg Hardy into this program.”

Even Jacksonville, which can use all the help it can get, won’t pursue Hardy. Its general manager, David Caldwell, diplomatically said it is “unlikely the Jaguars will pursue” the defensive end.

Exactly why the Seahawks have been linked to Hardy isn’t clear. That could be nothing more than smoke blowing from Hardy’s agent, Drew Rosenhaus, trying to drum up interest in his client. According to Rosenhaus, “six teams” are interested in Hardy. Rosenhaus hasn’t identified them, nor has any team corroborated the Rosenhaus claim.

Unlike the Raiders and 49ers, the Seahawks have not made any statement regarding Hardy. But the Seahawks and Cowboys could get Hardy on the super cheap and fill needs. To do so, they would not only have to deal with Hardy’s pending punishment from the NFL — possibly a suspension for the first six regular-season games — but with the red flags Hardy has attached to his future. So the question is: