A rising young star with the 49ers, Chris Borland retired Monday after studying the medical evidence about head trauma in football and decided the risk was not worth the reward. 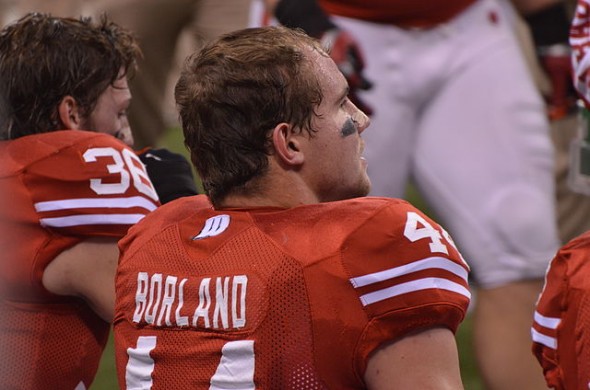 In a stunning development sure to rock the NFL, LB Chris Borland, a third-round pick of the 49ers who blossomed into a big part of the team’s future in 2014, retired Monday because of his apprehension over the long-term consequences of repetitive head trauma.

Borland, 24, becomes the first player in his prime to publicly step away from the game specifically because of rapidly growing evidence of debilitation experienced by numerous retired players.

Borland said he notified the 49ers on Friday, and the club confirmed his decision. Borland told ESPN’s Outside the Lines that he made his decision after consulting with family members, concussion researchers, friends and current and former teammates, as well as studying what is known about the relationship between football and neurodegenerative disease.

Here is the rest of the ESPN story:

“I just honestly want to do what’s best for my health,” Borland said. “From what I’ve researched and what I’ve experienced, I don’t think it’s worth the risk.”

Borland becomes the most prominent NFL player to leave the game in his prime because of concerns about brain injuries. More than 70 former players have been diagnosed with progressive neurological disease following their deaths, and numerous studies have shown connections between the repetitive head trauma associated with football, brain damage and issues such as depression and memory loss.

“I feel largely the same, as sharp as I’ve ever been. For me, it’s wanting to be proactive,” Borland said. “I’m concerned that if you wait till you have symptoms, it’s too late . . . There are a lot of unknowns. I can’t claim that X will happen. I just want to live a long healthy life, and I don’t want to have any neurological diseases or die younger than I would otherwise.”

The 49ers, in a statement, wished him the best.

“While unexpected, we certainly respect Chris’ decision,” team general manager Trent Baalke said. “From speaking with Chris, it was evident that he had put a great deal of thought into this decision. He was a consummate professional from day one and a very well respected member of our team and community. Chris is a determined young man that overcame long odds in his journey to the NFL and we are confident he will use the same approach to become very successful in his future endeavors. We will always consider him a 49er and wish him all the best.”

Borland was expected to be a key part of the 49ers defense this season, after the retirement of All-Pro linebacker Patrick Willis last week. Borland replaced Willis, 30, after six games last season; Willis had sustained a toe injury.

Willis’s retirement had no role in his decision, Borland said.

Borland said there was no chance he would change his mind. The third-round draft pick, who starred at the University of Wisconsin, said he has had just two diagnosed concussions: one while playing soccer in the eighth grade, the other while playing football as a sophomore in high school.

Borland, who is listed at 5-foot-11, 248 pounds, earned accolades for his aggressiveness and instincts at inside linebacker. He had 107 tackles and a sack in 14 games, eight of them starts. He was the NFC’s defensive player of the week for his performance against the New York Giants in Week 11. He led the 49ers with 13 tackles in that game and became the team’s first rookie linebacker with two interceptions in one game. He received one vote for NFL Defensive Rookie of the Year.

His success the past season did not make his decision more difficult, Borland said: “I’ve thought about what I could accomplish in football, but for me, personally, when you read about Mike Webster and Dave Duerson and Ray Easterling, you read all these stories, and to be the type of player I want to be in football, I think I’d have to take on some risks that, as a person, I don’t want to take on.”

Borland was referring to former NFL greats who were diagnosed with a devastating brain disease, chronic traumatic encephalopathy or CTE, after their deaths. Duerson and Easterling committed suicide.

Borland said he began to have misgivings during training camp. He said he sustained what he believed to be a concussion stuffing a running play but played through it, in part because he was trying to make the team.

“I just thought to myself, ‘What am I doing? Is this how I’m going to live my adult life, banging my head, especially with what I’ve learned and knew about the dangers?'”

He said the issue “gathered steam” as the season progressed. Before the fourth game of the preseason, at Houston, he wrote a letter to his parents informing them that he thought his career in the NFL would be brief because of his concerns about the potential long-term effects of head injuries.

After the season, Borland said, he consulted with prominent concussion researchers and former players to affirm his decision. He also scheduled baseline tests to monitor his neurological well-being going forward “and contribute to the greater research.” After thinking through the potential repercussions, Borland said the decision was ultimately “simple.”

He said part of the reason he waited until now was because he wanted to inform his family and friends, including a few 49ers teammates. He also said he wanted time to contact the researchers and study the issue further.

Borland, who earned a bachelor’s degree in history at the University of Wisconsin, said he plans to return to school and possibly pursue a career in sports management. He had a four-year contract with the 49ers worth just under $3 million, which included a signing bonus of $617,436.

The decision to retire had nothing to do with the 49ers, Borland said. He said his feelings toward the team and his teammates marked one of the hardest aspects of the decision.

“It’s an incredible organization, and they truly looked out for players’ best interests,” he said.

Borland is the fourth NFL player age 30 or younger to announce his retirement in the past week. Pittsburgh Steelers linebacker Jason Worilds, 27, said he retired “after much thought and consideration” to pursue “other interests.” Tennessee Titans and former University of Washington quarterback Jake Locker, 26, said he left the game because he no longer had “the burning desire necessary to play the game for a living.” Willis said he retired due to constant pain in his feet, among other reasons. He was placed on the season-ending injured reserve Nov. 11 after getting hurt Oct. 13.

Borland had a decorated career at Wisconsin, where he was named the Big Ten’s defensive player of the year and linebacker of the year as a senior. He was a first-team All-American selection and recipient of multiple All-Big Ten honors.

Meanwhile, Seahawks LB Bobby Wagner tweeted that he did not share Borland’s concerns:

No offense to anyone but I’m playing until I can’t anymore. I love this game to much.