Join us for drinks, food, chat about Seattle hoops

A delightful happy hour of hoops talk, good food, drink and views awaits you when you join Art Thiel and Mike Gastineau at the World Trade Center March 24. 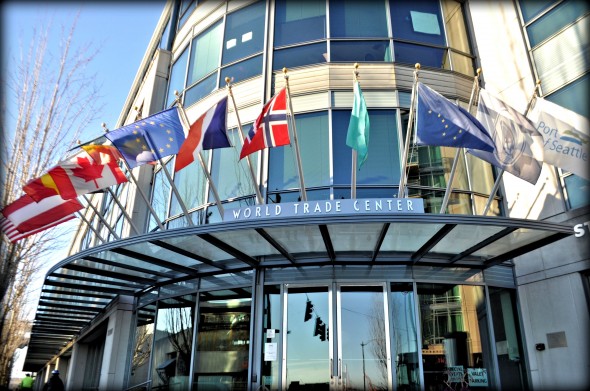 Time to get Sportspress Northwest readers together and talk hoops.

Please join me and friend and colleague Mike Gastineau, longtime KJR radio host who remains a raconteur of the highest order, for a rambunctious happy hour about hoops madness and lameness at 5 p.m. March 24 at the World Trade Center Seattle.

We’ll offer a behind-the-scenes look back at the weekend of March Madness after an 11-year absence from KeyArena, plus a look ahead at arena prospects and whether the NHL is a more realistic option than the NBA.

Bring your joy, anger, opinions, rumors and most of all, your questions, to participate in a rousing two hours of whip-smart conversation, as well as splendid food and drink at one of Seattle’s hidden gems, the World Trade Center’s fourth-floor restaurant, across from Pier 66 on the Seattle waterfront.

Among topics to be covered:

How is Gonzaga doing it, and how do the Huskies, Cougars and especially Seattle University, catch up?

What is Mayor Ed Murray doing playing the gay card when it comes to finally pushing for the Hansen arena project?

How has the Seahawks’ success altered the sports/civic landscape?

Will  Kevin Calabro ever again ask NBA fans to join him on a magic carpet ride?

Why is the NBA so dickish toward Seattle?

Why is the NHL, an unproven commodity in the market, so ass-over-teakettle to get to Seattle (Hint: Count the construction cranes along the city skyline.)

Hey, since you read this far, tell the concierge you’re friends with Mike and Art, and you get in for $20.