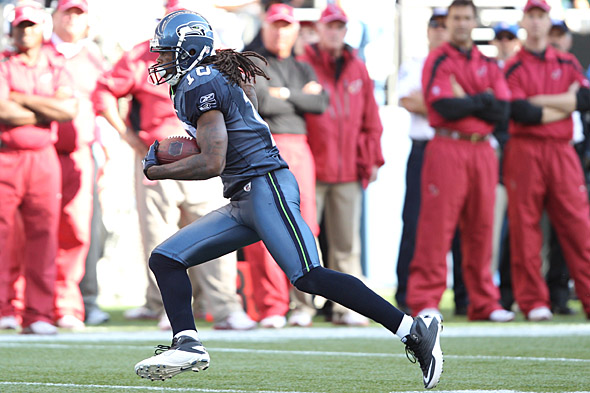 My first column for Sportspress Northwest was about Dr. Richard Ellenbogen, chief of neurosurgery at Seattle’s Harborview Medical Center. He had just been appointed co-chair of the NFL’s new head and neck trauma committee, a much-belated move by Commissioner Roger Goodell to put independent, unpaid physicians in charge of shaping NFL player health policy, instead of the hand puppets employed previously.

Ellenbogen told me that the issue of sports-related concussions hit home for him at home.

When his then-15-year-old son, Zach, was concussed in a high school football game, Ellenbogen was confronted by his wife, Sandy, a nurse.

“She told me,” he said, “’if you don’t get a handle on this, you’re not going to get any mothers to let their kids play. This game is about done, unless you can convince the mothers of America that you can make it safer.’”

The quote came to mind Monday when news broke that San Francisco 49ers rookie LB Chris Borland cited his apprehension over the threat posed by repeated head-knockings from football to his health long-term. He retired.

Besides crickets, all that could be heard was the thud of millions of jaws landing upon the cultural floor.

Borland, 24, said he read, he researched and he talked to people well versed in traumatic brain injury. He concluded that the estimated $4 million he would have earned through his four-year rookie contract — likely more, given the quality of his first year’s performance — was not worth it.

“I just thought to myself, ‘What am I doing? Is this how I’m going to live my adult life, banging my head, especially with what I’ve learned and knew about the dangers?’”

If you hadn’t heard of Borland before Monday, here’s what Pro Football Focus said of his skill level in his rookie season:

He played just 487 snaps, but played them well enough to earn a +20.8 PFF grade, the fourth-best mark among inside linebackers. From Week 6 onward, Borland notched 54 defensive stops, the best in the NFL over the remainder of the season despite missing the final two games with injury. He notched 82 solo tackles and 10 assists (using PFF’s retrospective, more accurate, count) in nine games. That’s an average of being in on more than 10 tackles per game.

Borland’s decision represents a watershed moment in the history of football — a good player at the beginning of a good career abandoning millions because of the potential for long-term brain damage. As his stats attested, this man is no wuss.

He didn’t reference his mother’s opinion, or his father’s opinion, regarding their influence on his decision. He said he kept them informed as he spent much of his free time learning about CTE, the condition that doctors say leads to diminished brain function and has been diagnosed in autopsies on more than 70 retired football players.

But his decision reflected Sandy Ellenbogen’s five-year-old forecast of trouble from the mothers of football-lusting sons. As we saw Monday, one of those young men absorbed the message.

Despite her husband’s best efforts — the committee’s conclusions in midseason 2010 caused unprecedented changes in the rules regarding contact with the head, followed by much player complaint — the NFL has reduced the number of reported concussions, but has come nowhere close to a solution.

It’s a collision sport. There’s not much more that can be done without fundamentally changing America’s most popular spectator endeavor into a non-collision sport.

Borland was not the first active player to clear his throat on the topic. To much less attention, Seahawks WR Sidney Rice said his decision to retire before the 2014 season was to avoid more concussions than the game already had given him.

Rice did an interview with CBS News and discussed his rationale:

“You have these guys that have been going to the same house for 25 years,” said Rice, speaking about stories from NFL legends Tony Dorsett and Herschel Walker. “And all of the sudden they get to a certain point on their way home, and they have to call their wives to get the directions home. So that is something that really hit home for me after having experienced so many concussions.”

Rice’s decision didn’t get as much attention because, due to other injuries, there was a legitimate question whether he would have made the Seahawks roster. In 2013, he played in only eight games and had 15 catches, but earned a ring as part of the Super Bowl champions.

Since Borland’s decision came at the front end of his career, it cannot be overlooked, ignored or unseen, as was Rice. But the fact that two intelligent, well-regarded players came to the same conclusion puts the matters now squarely in the front of every active NFL player’s mind.

They can say it isn’t there, but they are dissembling because the topic is in the front of minds of everyone who loves them — parents, wives, siblings, girlfriends, older children.

The players’ rationalization is obvious — the money is unlike any they will ever see the rest of their lives. I find that hard to dismiss, particularly for any player who came from less than a middle-income family.

And I also believe it to be nonsense that young men should know better than to have such reckless disregard for their own welfare. If it were not for the bravado and daring of young American men, we might be speaking another language, or having a third-world economy.

No, I’m not analogizing war to football (one of my goals in life is to one day have the resources to punch in the face every NFL executive, player, coach and media twit who uses “war room” instead of draft room), because I grasp the difference. But that is not to dismiss football as irrelevant, because it is not. What it is, is extremely popular, high-risk entertainment that has no net, nor immediately visible negative consequences to the brain, to mitigate the risk.

Some players who are fortunate enough to see the far horizon should be free to opt out with support, instead of the derision that has come Borland’s way from the mouth-breathing segment of the fan base. Those players who choose to continue to play should receive significantly more financial, medical and psychological support for their post-career lives than the NFL and the weak players union now provide.

Among all the tempests and controversies that have stirred the NFL in recent years, the most shameful episode continues to be the $765 million settlement the owners threw at the retired players in 2013 to end their lawsuit against the league, so the league did not have to answer the questions about what it knew about concussions, and when it was known.

Paying a pittance, relative to revenues, to thousands of risk-takers to buy their silence was one of the most cynically callous acts in the history of American sports. But it worked — the welfare of retired players is on the football media’s radar only when there’s another suicide.

I believe Borland or Rice do not want football to end. Neither do I. What does need to end is the NFL-directed camouflage that marginalizes clear understanding of the risks to performers and diminishes any urgency to help significantly the retired players.

It’s still a free country. We are free to take risks to smoke cigarettes and play football. Good for us, and good for tobacco companies that are free to make millions of dollars for 50 years despite federal research that made indisputably clear the companies were peddling cancer.

But at least there was some price to pay for selling death by the pack.

In 1998, tobacco companies settled litigation with the states by agreeing to pay $206 billion over 25 years to help recover Medicare and Medicaid health care costs from consequences to smokers.

That’s a good standard. Since making money is what the NFL does best, it’s your turn to match, big fellas.