In terms of college basketball legacies, it doesn’t get much more disparate than Georgetown vs. Eastern Washington. But that’s why the NCAA tournament is fun. 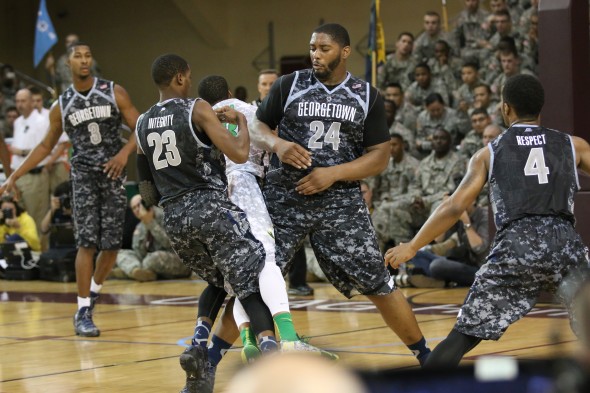 PORTLAND – Mention Georgetown University, and basketball immediately comes to mind. Mention Eastern Washington University, and the first thing that comes to mind is . . . wind. Lots and lots of wind. And wheat fields. And deafening silence when school is not in session in tiny, faceless Cheney.

The aforementioned observations are made not by a smart-ass, big-city journalist. They are made by a smart-ass, small-town journalist who played baseball (quite poorly) for the Eagles when Eastern a) had baseball and b) competed in NAIA sports. In your humble correspondent’s case, NAIA stood for Not (even) Average In Anything.

One of the greatest attributes of the NCAA men’s basketball tournament – aka America’s Most Fun Sports Event – is that unlikely unions are formed on a daily basis, particularly in the early rounds. Georgetown, a large Catholic university in a large city (Washington, D.C.), debuts in this year’s tournament against Eastern Washington, a small public university in a small town. Georgetown has a glorious basketball past. Eastern has a . . .  past.

A victory over Georgetown (approximately 7 p.m., truTV) would provide Eastern with a smidgen of the national cachet built up over the years by the Hoyas. The Eagles could use some local cachet, too.

The Washington Post newspaper breathlessly reported this week that EWU is a “basketball-mad campus,” but the Post apparently did not notice that the Eagles failed to draw more than 2,000 fans until their 10th home game. Eastern sold out zero games at their 5,000-seat arena. That’s why tarps usually cover much of the upper-deck seating at Reese Court.

It will not matter Thursday. Forty minutes of basketball that television will drag out for two-plus hours could dramatically change the image of Eastern as a basketball school and as a school, period (re: Gonzaga).

The 13th-seeded Eagles (26-8) have a puncher’s chance against fourth-seeded Georgetown (21-10) if only because Eastern shoots 3-pointers as if they are layups. The 22nd-ranked Hoyas are bigger, more physical and better defensively, but they shoot basketballs as if they are anvils.

Georgetown is a 7½-point favorite at the Moda Center, but the national media has placed the Hoyas on upset alert. A crowd of 17,000 or more, the largest ever to watch an Eastern basketball game, is expected to be on hand.

Eastern and Georgetown players and coaches maintained tournament tradition at Wednesday’s press conferences by making their opponent out to be only slightly less formidable than plutonium. Only a summer windstorm generates more hot air than an NCAA tournament press conference.

Online media created a buzz earlier in the day by running a story that said Eastern coach Jim Hayford “guarantees” a victory over Georgetown. It turns out that Hayford was on the team bus when he predicted, “We’re gonna win,” during a national radio show.

“I knew the 15 guys (players) on the bus were listening to that,” Hayford said. “I want my team confident.”

5 – Consecutive NCAA tournaments in which Georgetown has lost to a double-digit seed.

22.9 – Points per game for Division I scoring leader Tyler Harvey.

60.8 – Field-goal shooting percentage for Venky Jois, who ranks seventh in Division I.

4.9 – Blocked shots per game for Eastern, same as Georgetown.

1 – Eastern and Georgetown victories this season against Indiana, their only common opponent.

236 – National rank in strength of schedule, according to ESPN. Georgetown is 12th.

46 – NCAA tournament wins deficit Eastern faces when playing Georgetown. Eastern is 0-1, losing in 2004 to Oklahoma State. The Hoyas are 46-21 in 29 appearances.

9 – Years since a Big Sky Conference team won a game in the tournament.