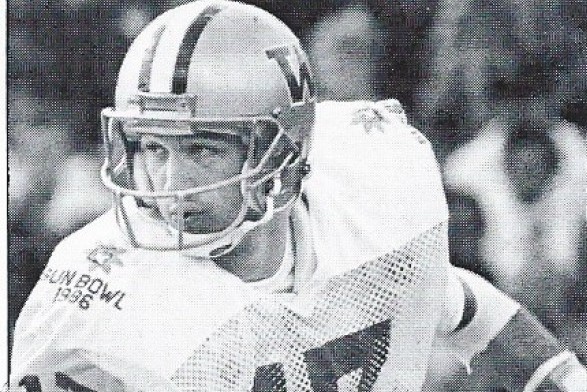 Everett native Chris Chandler was MVP of two bowl games during his career (1984-87) with the Washington Huskies. / University of Washington

Quarterback Chris Chandler and center James Edwards, both of whom starred at the University of Washington and then combined to play 36 professional seasons in the NFL and NBA respectively, are among six individuals voted into the State of Washington Sports Hall of Fame.

“This is a wonderful class for our Hall of Fame that started in 1960,” said executive director Marc Blau. “It was selected by a panel of experts, many of them sportswriters and broadcasters, from throughout the state.”

Chandler, who earned letters in five sports at Everett High School, was MVP of two bowl games as a Husky. In his 17-year NFL career with eight franchises he passed for 170 touchdowns and more than 28,000 yards. He led Atlanta to the 1999 Super Bowl after a 14-2 regular season record.

Walker is considered one of the best female basketball players in state history. She led Garfield to a state championship and in the 1980 tournament opener outscored the entire Renton team with 40 points in a 68-35 victory. She went on to star at Louisiana State where she averaged 25 points, played in Europe and later was one of the first women to play with the Harlem Globetrotters. She is the girls basketball coach at Garfield.

Owen worked at the P-I for 36 years until 1993 and seven times was named state sportswriter of the year. He was sports editor as well as columnist for much of that span and also wrote a popular food column “Intermediate Eater” that he continued to write after retiring. Owen died last year.

Pocock was a native of England and a master boatbuilder who was invited by UW rowing coach Hiram Conibear to establish his shell-building business on campus. He mentored UW coaches and athletes and became famous internationally as a boat-builder and rowing authority.

His expertise and contributions to the 1936 UW crew that won the Olympic gold medal are described in the best-selling book “The Boys in the Boat.”

The State of Washington Sports Hall of Fame was started by sportscaster Clay Huntington of Tacoma. The addition of this year’s class will bring the total of inductees to 195.

An induction ceremony will be held at Safeco Field prior to a Seattle Mariners game at a date to be determined. Plaques honoring Hall of Fame members are on display in the Tacoma Dome at the Shanaman Sports Museum.