Mariners roundup: Ramirez vs. Walker for No. 5

Erasmo Rarmirez did what he could to win the No. 5 spot in the rotation with four innings of one-hit ball this week. 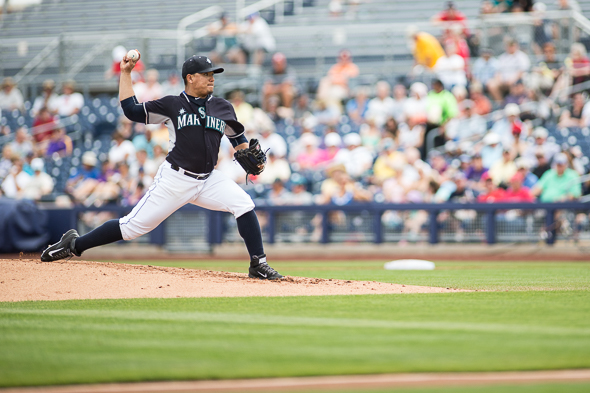 Erasmo Ramirez made his case for the fifth starting spot this week in Peoria. / Drew McKenzie, Sportspress Northwest

Now that Brad Miller has “won” the shortstop job for the Mariners, due to Chris Taylor’s broken wrist bone, the remaining issue in spring training is the No. 5 starter, a choice between Erasmo Ramirez vs. Taijuan Walker. Ramirez added to his case Wednesday night against Oakland with four scoreless innings, while Walker faces the Cleveland Indians Thursday night.

Ramirez didn’t allow a run and was touched for one hit — Craig Gentry’s game-opening double. He walked one and struck out two to earn his first victory in three spring starts while lowering his ERA to 2.00.

“I’m happy, I feel good because the command was there,” said Ramirez, who survived the first inning unscathed because pulled-in shortstop Miller snared Marcus Semien’s line drive and forced Gentry at third base for a double play. “I just made one bad pitch to Gentry, right down the middle. But the whole deal now is just to execute. If you miss one, just come back with the next pitch.”

With Felix Hernandez at No. 1, Hisashi Iwakuma at No. 2, James Paxton at No. 3 and winter signee A.J. Happ at No. 4, Seattle’s rotation is pretty well set. Ramirez has allowed three runs (two earned) on eight hits with five strikeouts and a walk in 11 innings over his four starts. More impressive is that he’s issued only one walk, and is now anxiously awaiting news on his fate.

“Just like you, just like everyone else,” he told MLB.com. “It’s hard. We’ve got a lot of good, young arms. They’re good throwers. They throw strikes. They’re smart. It’s a good competition. You just have to wait, but it is hard.”

James Jones scored six runs in his past five games and ranks third in Cactus League action with nine runs . . . OF Austin Jackson hit successfully in five of his first six games . . . Tyler Olson has faced the minimum 18 batters in his four appearances (6.0 IP) and recorded eight strikeouts . . . David Rollins has yet to allow a run in 5.1 innings . . . The Mariners and Texas Rangers meet Friday at 1:05 p.m. with Roenis Elias contesting Derek Holland. Felix Hernandez will pitch against Jon Lester of the White Sox Saturday . . . James Paxton, whom the club hopes will be in the starting rotation when the season starts, will receive his first spring training game action Sunday. Paxton has been dealing with forearm soreness.

Bob Nightengale of USA Today says the Mariners now have a team that should not only win the AL West, but perhaps the first World Series in franchise history.

Richard Justice of MLB.com believes that manager Lloyd McClendon is the “perfect man” to lead the Mariners to the next level.

Jesus Montero arrived at spring training having lost 40 pounds. Now competing for a backup job at first base, Montero has to “clean up a big loop in his swing” if he’s going to contribute to the ball club, according to McClendon.