The University of Louisville, in the words of men’s basketball coach Rick Pitino, has made the Seattle area into a “recruiting pipeline.” 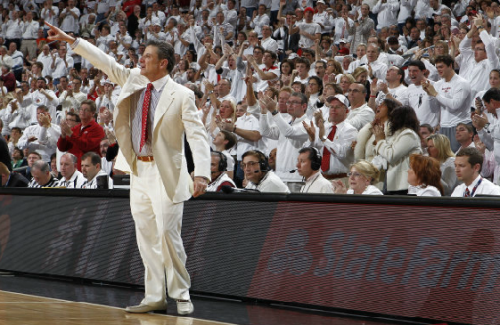 Rick Pitino has mined the Seattle area for prep talent despite playing on the other side of the country. / The Cardinal Connect

For a guy who coaches at Louisville, who was born in New York City, who played guard at University of Massachusetts and who has no clear personal connection to the Pacific Northwest, Rick Pitino’s recruiting influence in the Seattle area runs deep.

All are former highly touted Seattle prep basketball recruits Pitino brought to Louisville since he became coach in 2001, after a failed stint with the NBA’s Boston Celtics.

“It’s been a recruiting pipeline for us,” Pitino said Thursday of the Seattle area.

His fourth-seeded Cardinals (24-8) face 13th-seeded UC Irvine (21-12) Friday at 1:10 p.m. at KeyArena in the second round of the NCAA tournament. An athletic, defense-first outfit, much of the Cardinals’ focus will be dedicated to defending 7-foot-6 Anteaters C Mamadou Ndiaye, the tallest player in college basketball. Fans certainly won’t miss him.

But most who attend are probably unaware that three ballyhooed local recruits from the last decade ended up at Louisville.

Siva, from Franklin High School, and Williams, a Rainier Beach product, no longer play for Pitino. The former enjoyed a decorated Louisville career, capped when he led the Cardinals to an NCAA national title in 2013. Williams, who played under Pitino from 2005-09 and went to two Elite Eights, is a free agent after stints with the New Jersey Nets, Houston Rockets and Boston Celtics.

The 27-year-old was last seen playing for Maccabi Ashdod in Israel. Siva, 24, is a guard for the Erie Bayhawks in the NBA D-League.

Asked what initially drew him to recruiting the Seattle area, Pitino said it began when a college coach approached him while he was in Las Vegas. The coach told Pitino he just watched a player with “Michael Jordan’s” athleticism.

So Pitino went to watch Williams.

“He didn’t play well at all,” Pitino recalled Thursday. “I saw that coach that night and I said, ‘I didn’t see any Michael Jordan in that young man.’ He said, ‘Go see him again.’ I went through the same thing. I saw him three times. And he put on a dunking display and an athletic display the likes I hadn’t seen in a long time. So I started recruiting him, sent (son and former assistant coach Richard Pitino) out here. And that’s the genesis of it all.”

A few years later, Williams provided Pitino an assist when Siva, then in high school, came to visit Louisville’s campus.

“(Williams) was stretching right before practice and Peyton walked in and (he) gave him a big hug, and T-Will said to him, ‘Listen you little so-and-so, don’t be wasting coach’s time,'” Pitino said. “‘Just telling tell him you’re committing.’ And that’s exactly what he did.”

Locals hoping to see Aaron have a happy homecoming this week at KeyArena should save their money. The highly-recruited 6-foot-7 small forward from Rainier Beach has played sparingly this season as a freshman after he chose Louisville over reported offers from Arizona, Connecticut, Oregon State, San Diego State, St. John’s, Syracuse, UCLA, UNLV and Washington.

Aaron actually spent his freshman prep season at Mater Dei High School (Santa Ana, CA), where he helped the Monarchs go 32-3 and win a California Divsion 1 state championship. Then he transferred to Taft (Woodland Hills), where he never played in a game, before transferring to Rainier Beach for his junior and senior seasons.

The former four-star prospect is averaging 1.5 points, 0.9 rebounds and playing eight minutes per game for the Cardinals. He fell out of favor with Pitino about a month ago.

There doesn’t seem to be any guarantee that he’ll be back next season, either.

“If he doesn’t, he’ll be at another school,” Pitino said of Aaron’s need to change his outlook. “That’s the way it will be. He’s never going to step on the court until he gets that attitude.”

It wouldn’t be an NCAA tournament without a No. 12 seed beating a No. 5 seed. According to the sports analytics site fivethirtyeight.com, No. 5 seeds entered Thursday having lost 33 of 80 times in such match-ups since 1995.

Last week, Wyoming earned its first NCAA tournament appearance since 2002 by winning the Mountain West Conference tournament in Las Vegas. The Cowboys upset San Diego State 45-43 in the title game. Coach Larry Shyatt’s group is content to slow it down, and are by no means explosive offensively. The Cowboys rank 303rd out of 345 teams in the country in scoring offense (61.7 points per game).

Northern Iowa (30-3) matched its school record for single-season victories when it overcame an 18-point deficit and topped Illinois State, 69-60, in the Missouri Valley Conference tournament title game. The 11th-ranked Panthers are led by MVC Player of the Year and MVC Tournament Most Outstanding Player Seth Tuttle. The senior forward averages 15.3 points, 6.8 rebounds and 3.3 assists per game and shoots 61.6 percent from the field and 42.9 percent from 3-point range. The Panthers rank No. 4 in the country in scoring defense, at 54.3 points per game.

Iowa closed its Big Ten conference season with six consecutive wins, its longest such streak since 1986-87. That was crucial to their NCAA hopes, considering the Hawkeyes fell to a lackluster Penn State team early in the conference tournament. But Iowa did finish with a decent resume (44 RPI) thanks to a road win over North Carolina in the Big Ten/ACC Challenge, a season sweep over Ohio State and a home win over Maryland. The Hawkeyes are led by senior forward Aaron White (16 points, 7.5 rebounds per game).

In its first season in the Atlantic 10, Davidson captured the league’s regular season title before falling to VCU in the A-10 tournament semifinals. Winners of 10 of their last 11, the Wildcats are led by A-10 Player of the Year Tyler Kalinoski. The senior guard averages 17.0 points, 5.6 rebounds and 4.1 assists per game. A-10 Coach of the Year Bob McKillop is in his 26th year as the school’s head coach. The Wildcats thrived this year from beyond the arc, knocking in a school-record 337 3-pointers.