Thiel: A 7-foot-6 Anteater is after Rick Pitino

4th-seeded Louisville is faster, more experienced than Cal-Irvine, in its first Big Dance. But they can’t shoot outside, and inside Mamadou Ndiaye is 7-foot-6. Upset special? 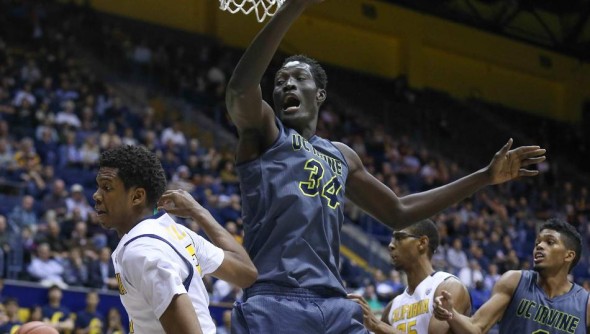 As America’s tallest player at 7-6, Mamadou Ndiaye of Cal-Irvine is a game-changer. / USA Today

It means that Louisville coach Rick Pitino, the most celebrated hoops figure in the eight-team Seattle shindig with his 20 previous tourney appearances, is staring at first-round elimination by a 7-foot-6 Anteater. If a fan cannot get excited about this, turn in your card key to the Star Wars bar and go back to spring training.

It’s not enough that the Cal-Irvine team is a 13 seed. Nor is it enough that this is the first Big Dance appearance in the school’s history. Or that the team’s nickname is (really) the Anteaters.

It is the prospect that the tallest player in America might have his way against the man with America’s biggest coaching ego.

That pins the needle of the NCAA freak-o-meter on 10.

Not much coaching can be done against seven-foot-six. If Mamadou Ndiaye can do just a little more than just stand there waving . . . well, of the 68 teams that began the tourney, Louisville was ranked 68th in three-point shooting. That means it will have to step in close to an 8-foot-3 wing span if it wants avoid the ignominy of a one-and-done exit for the fourth-seeded Cardinals. Pitino might spontaneously combust.

“It’s always great for your confidence as a coach going into with all the upsets.”

Pitino was being sardonic in order to offer a veneer of humility. But there is a bit of truth to his fretting, because the tourney opener is when teams often meet with no mutual history, which typically causes the favorite more problems than the underdog.

“We’re different when he’s out there, because we have a guy who is a half foot taller than anybody’s ever seen on the floor,” said Irvine coach Russell Turner to laughter in the interview room. “I think that’s especially a factor when a team is playing against Mamadou for the first time. It’s hard to imagine his size, his height and his length.

A native of Dakar, Senegal, Ndiaye as a youth outgrew his favorite sport, soccer, much in the way his fellow African, NBA superstar Hakeem Olajuwon, did three decades earlier. 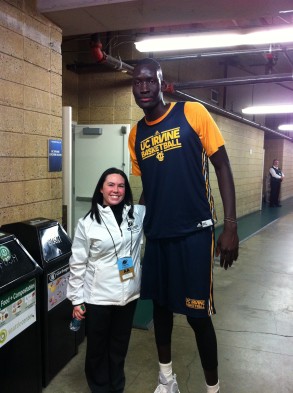 He was discovered by Amadou Koundoul, a fellow Senegalese who was an assistant coach at Seattle University, but in 2010 was a UCI assistant gone home for a visit. He encouraged Ndiaye to move to the U.S. for school and basketball training.

He ended up at Stoneridge Prep in Simi Valley, CA., about 45 miles northwest of Los Angeles. But after experiencing dizziness after workouts, doctors discovered a benign tumor on his pituitary gland, which was the source of his gigantism but also a threat to his vision and, potentially, his life.

Two surgeries fixed the problem, but the school couldn’t afford the costs. After a campaign raised charity donations to cover the expense, Ndiaye was adopted by an intensive care nurse at Hoag Memorial Hospital in Newport Beach, CA, along with her husband. They lived not far from the Irvine campus, and enrolled him in Brethren Christian High.

“We had gotten to know him before the surgeries,” Turner said. “He was around our campus a lot. He was familiar with our gym, with our coaches, and with the community around Irvine.

After meeting with player and family in his junior year, it seemed next to impossible to get him qualified for NCAA eligibility.

It required an incredible commitment on his part and on his family’s part — we helped see that through,” Turner said. “That made the biggest difference in recruiting. We became trusted with them over a course of a long period of time. So, when some of the bigger schools came  — and they came late — they couldn’t overcome us.”

As Ndiaye said Thursday in his deep bass voice, “I was growing up and the people there are very nice. That’s why I became the UCI player.”

Still weak and slow for Division I, he played in only 14 games with 10 starts. But he was having impact — ask the Washington Huskies. On Nov. 14, 2013, Ndiaye set a school record with nine blocked shots as the ‘Eaters beat UW 86-72 at Hec Ed.

In his sophomore season of 34 starts but limited minutes, he averaged 8.7 ppg and 5.9 rpg and 3.1 blocks. He remains foul prone, which has caught the attention of Louisville.

“We been watching a lot of film, and see he gets a lot of offensive foul calls with pushing off,” said the Cardinals’ Montrezl Harrell. “We see that his condition is not nowhere near where ours is, so we’re going to make him run a lot. We’re a pressing team.

“We’re going to make sure that he plays the way we (do) — get up and down the floor.”

Ndiaye said the experience is hardly unknown to him.

“I know that’s their plan, to try to get me in foul trouble — but we’ll see,” he said.  “Just be smarter. Handle the pressure, whatever they bring. I’ll just try to go with them.”

It’s a tried-and-true formula against such a big man, and it works — even though the ‘Eaters are the Big West Conference tournament champions, their 21-12 record suggests that Ndiaye doesn’t present an insoluble problem.

But this is the NCAA tournament, where when the weird gets going, even Pitino can be helpless against the ridiculous.

Or, as they say in the Orange County strip malls that surround the campus, “Rip ’em, Eaters!”