After five consecutive seasons of second-game exits, No. 2 seed Gonzaga finally seems primed to make a deep run into the NCAA tournament. The journey starts Friday. 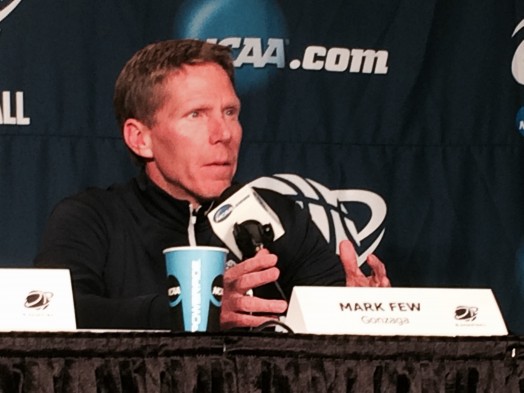 Perhaps he was relieved that No. 3 seed Iowa State was a first-round upset victim at the hands of No. 14 seed Alabama-Birmingham. Maybe it had more to do with the favorable draw that landed his team a four-hour drive from its Spokane campus.

Whatever the reason, sometimes-surly Gonzaga coach Mark Few seemed at ease Thursday during his press conference at KeyArena.

He cracked jokes with reporters. His answers were long and detailed. He even smiled once or twice, though the photo above doesn’t show it.

Few has plenty reason to be happy.

Before Iowa State lost to UAB, most expected a tough Sweet 16 matchup between the Cyclones and Zags. The upset no doubt helped Gonzaga’s chances of making its first Final Four in school history. However, it is never wise to bank on Gonzaga going deep in the tournament.

The Zags have lost their second game in each of the past five years, including a 2013 loss to Wichita State, which went on to the Final Four. Regardless, Gonzaga was a No. 1 seed. That was supposed to be the year Few finally came through.

“Every year, we went into it trying to win as many games as we possibly can,” Few said Thursday. “It’s not about me, it’s about serving this particular group. You want to make their dreams come to fruition and take them as far as they can. And when it’s over, it’s over.”

But there is ample reason to believe 2015 will be different.

Earlier this season, Gonzaga set a school record with 22 consecutive victories. Even for Gonzaga standards, this team is deep and balanced.

It has West Coast Conference newcomer of the Year Kyle Wiltjer, a 6-foot-10 stretch forward who averages 16.7 points and six rebounds. He transferred from Kentucky before the 2013-14 season, then sat out the campaign because of NCAA rules. In his first season playing for Few, he helped transform the Zags into one of the best offensive teams in the country.

“(Wiltjer) is one of those guys that is probably at the top of everybody’s game plan,” Few said. “The thing that’s interesting about Kyle this year is he’s really developed himself around the basket and done a nice job. He’s stronger and he’s really crafty, and just has a real knack for putting the ball in the basket.”

“It’s nice,” added senior guard Kevin Pangos. “When you got a guy that’s a match-up problem like that, who can go in the post, can take the open three. He makes it look so easy. I enjoy watching it. I don’t know about everyone else, but I do.”

Few also expressed gratitude about the way senior guard Byron Wesley, a graduate transfer from USC, seamlessly blended with the the Zags en route to their 14th WCC title in the past 15 seasons. His scoring and rebounding totals are down from last season, when he averaged 17.8 points and 6.4 rebounds, but being on a team that wins has eased the transition.

“This is why I came to Gonzaga,” said Wesley, averaging 10.8 points per game. “This is why I decided to transfer, was to win my league, and win the championship of my league, which we have done already, and to finally make it to the Big Dance in March.”

As with Wiltjer, existing players welcomed Wesley. It helped the Zags cruise to their 17th consecutive NCAA Tournament appearance.

“It’s just been amazing how seamless the adjustment has been,” Few said. “From Day One, those guys that were up here, the seniors, welcomed him with open arms. They knew he could help us.

“But at the same time, they knew it was going to diminish their shots, their minutes and parts of their roles. I think what they have been able to do is a big part of the story.”