Wyoming’s best season since 2001-02 came to an end Friday at KeyArena when the Cowboys were outgunned by University of Northern Iowa. 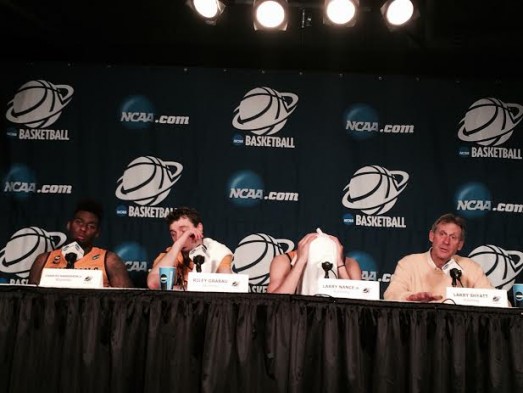 Larry Nance Jr. tried to answer but couldn’t find the words. His eyes bloodshot, the Wyoming senior forward fought back tears. It was no use.

“What did this season mean to you to go out this way?” a reporter asked.

After a moment, Cowboys coach Larry Shyatt stepped in to answer.

No. 12 seed Wyoming went out in a 71-54 loss to No. 5 seed Northern Iowa on Friday at KeyArena in the second round of the NCAA tournament. But in one sense, Shyatt was right. The Cowboys (25-10) won the Mountain West Conference tournament last week in Las Vegas to earn the league’s automatic bid into the NCAA tournament. It also earned the school its first trip to the Big Dance since 2002.

But the mojo accumulated from taking three games in as many days, including a semifinal 71-66 overtime win over Boise State and a 45-43 triumph over No. 25 San Diego State in the MWC championship, was quickly vanquished Friday by a ninth-ranked Northern Iowa (31-3) outfit that used a 10-0 run early in the first half to jump to an 18-9 lead.

Wyoming trailed 50-29, with 13:51 left in the game before Nance, who scored 15 of his team-high 16 points in the second half, helped the Cowboys orchestrate a 14-0 run to cut the lead to seven. Panthers junior Paul Jesperson (16 points) answered the following possession with a 3-pointer from the top of the key to end the spurt.

“It was a pretty calm thing,” Jesperson said. “We had came out of the timeout at one point when it was close and we just said to each other, listen, it’s close, we’re going to remain calm, let’s just do what we’ve done all year, and that’s get stops, make open shots, play through (Seth Tuttle).”

The approach worked. After that, Wyoming never got it closer than seven.

“These guys weren’t crushed,” Shyatt said of the comeback. “When they made it a seven-point game with about six or seven to play, I mean, there’s more than enough time, but you have to continue to crusade.”

Wyoming was unable, in large part thanks to Missouri Valley Conference Sixth Man of the Year Wes Washpun. The junior guard was the focus of much attention leading into Friday because his dad, Troy, played basketball at Wyoming from 1982-84.

Washpun scored eight of his 10 points in the second half, including a handful of key mid-range jumpers down the stretch.

“I thought Washpun’s (shots) were on our terms,” Shyatt said. “He had to put it on the deck, step back a few times, and he knocked in two or three big shots.”

Northern Iowa was aided by 14 points and nine rebounds from Missouri Valley Conference Player of the Year Seth Tuttle. The senior forward, along with forward Marvin Singleton, helped shut down Nance during the first half, while the Panthers built a 35-24 lead going into the break.

“I thought that (Marvin Singleton) did a great job on him,” said UNI coach Ben Jacobson. “Marv was physical with him and got underneath him a little bit and made it hard for him to catch it. When he did, we were there in time to double him.”

Cowboys senior forward Charles Hankerson Jr. chipped in 15 points, all via a career-high, five 3-pointers. Four came in the first half when Wyoming struggled to score.

“I just wish I had more to give this university,” he said.