In the final of four second-round games Friday at Key Arena, Gonzaga’s runaway over North Dakota State turned tense, but the Bulldogs calmed down and prevailed 86-76. 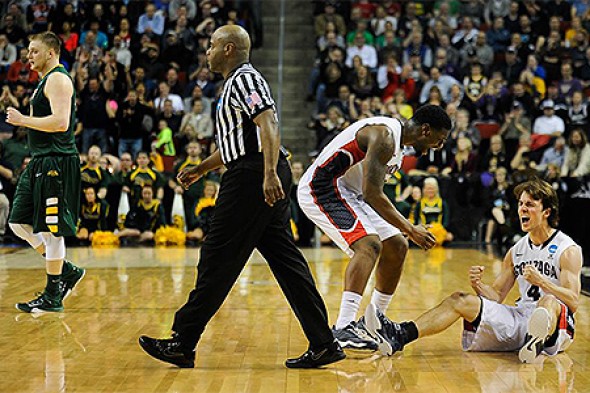 It turned out that the old girl can still put on a swell show of big-time basketball. But for a few minutes in the final of four NCAA tournament games at KeyArena Friday, Gonzaga fooled around long enough to introduce the idea of a magnum poop of the hoop party. As well as encourage the Zags’ legion of skeptics.As the many Bulldogs fanatics in the sellout crowd of 14,852 watched with growing unease, 15th-seeded North Dakota State chewed down an 18-point lead to six in the second half. They did it largely on the ample back of Dexter Werner, a 6-6, 240-pound reserve who whipped through the middle of the Zags defense with startling impunity and panache.

“So I would pick him up any day in a men’s league team,” he said, drawing chuckles.

This was, however, the NCAA tournament, where millions of dollars shift this way and that, depending on the actions of young thoroughbred athletes, not the pirouettes of beer-leaguers.

Then again, that’s part of the charm of the entertainment, isn’t it?

Wiltjer’s humor could be indulged only because the Zags moved on with an 86-76 win over the resilient Bison, who seemed doomed to a typical 2-vs.-15 blowout until they relaunched in the second half.

“In the first half they kind of beat us,” said guard Paul Miller. “They played a little bit tougher than we did, beat us on the boards, and we decided at halftime that we just weren’t going to go down like that. We wanted to come out swinging.”

The fact that they landed a few uppercuts will give hope to No. 7 Iowa, impressive 83-52 winners over Davidson in the day’s third game. The Hawkeyes and Zags play in the first game at 4:10 p.m. Sunday, followed by Louisville vs. Northern Iowa in the second game about 6:40 p.m. Bucking the tourney trend of upset that started Thursday, the four Seattle games went to the higher seed, as did all but one of the other 12 games Friday around the college hoops nation.

“Of all the teams this weekend, I thought Iowa probably had the most impressive performance, at least that I saw,” he said. But he had no time for the notion that that the Zags’ sag in any way diminished the feat of winning in the tourney opener.

“I don’t know about getting over the hump. We have done it many times in this program. So for us, it’s about needing to play better — obviously we need to play better on the defensive end.

“Iowa is clicking on all cylinders. We got 36 hours to get back and get our feet under us and get rested and hopefully come out and play a great game.”

Even though Wiltjer had a game-high 23 points and teammate Kevin Pangos had 10 of his 18 in a key second-half stretch that stalled the Dakotans, the “great game” appellation Friday night belonged to the crewcut Werner, who played just 24 minutes but hit 10 of 14 shots as the Zags defense chose to ignore him in favor of more noteworthy threats.

Werner’s pet move, a right-hand drive down the lane, followed by a reverse-pivot fadeaway, delighted the crowed and flummoxed Przemek Karnowski, the Zags’ 7-1 center. Werner was so jacked at his repeated success that as he ran up the court after a score, past the Dakota cheering section, he turned his head to the crowd, wagged his tongue and shrugged his shoulders.

“Honestly, it was just a little blurry, really,” he said, grinning. “I told coach that’s how we practice it — I trip on a guy’s foot and fade away and bank it in.

“I took some looks I probably wouldn’t regularly take, but I was hitting, so . . . I wouldn’t have gotten those looks without all the pressure they were putting on our wings. I just had to take it as it came.”

Another star of the evening was the arena. Faded since the 2008 departure of the Sonics, and absent NCAA tournament play since 2004, the Key’s winning 2015 bid caused the city and the Seattle Sports Commission to put some cash in the joint to help it look and work better.

Seats and suites were all filled, and with Gonzaga’s presence, probably will remain so Sunday. Few didn’t realize it had been 11 years since a tourney round was held here.

“That’s too bad,” he said. “Because this is a great city. This was a great city for a Final Four (1984, 1989, 1995). It’s been unbelievable. To see the fans around town recognizing the guys and supporting all of us, and obviously the noise level in there for the supporting us was something that was special. Actually I think got us going a little bit.

“I think it’s a fabulous place for not only first and second round, but for a regional final now too.”

Those tourneys are already spoken for through 2018. But Seattle seemed to get this one right. As did Gonzaga. The trick for Sunday is to get better. Way better.