Thiel: Zags’ Dance history is upon a big step

17 NCAA tourney appearances in a row is impressive, but a weak conference and no Final Fours leave Gonzaga with an odd place in the college basketball firmament. 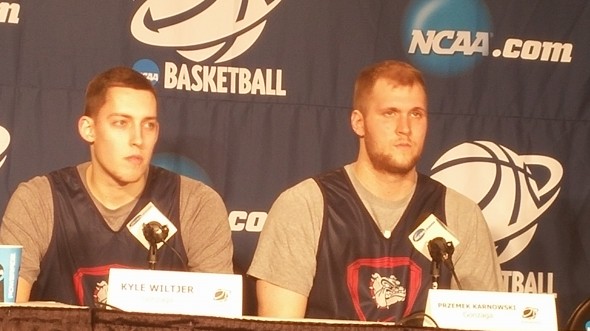 Not to put too fine a point on it, but Gonzaga’s two-game season continues Sunday at KeyArena, where it could end right then and there.

So long dominant have the Bulldogs been in their weak corner of the college hoops world that the credibility that should attend their 17 consecutive NCAA tournament appearances just isn’t there. A few minutes’ worth of struggle against 15th-seeded North Dakota State, and the “ah-HAH”  moment rippled across millions of brackets that had the Zags gone by the round of 16.

The West Coast Conference that they have dominated since 1999 gains little respect among the posh salons of the basketball illuminati. So the pressure on the Zags to deliver in the tournament, which has become a predictable extension of their season, is at its apex this year, and at least as great as any team in the tourney.

The Big Dance is their one annual chance to explode the big-fish-from-a-small-pond reputation, which they have earned with 16 consecutive tourneys in which they didn’t get beyond the round of 16.

In the way for this year’s chance at 4:10 p.m. Sunday is seventh-seeded Iowa, which impressed Friday in an 83-52 stomp of 10th-seed Davidson. The Hawkeyes from the Big Ten Conference are among the few teams as big as the Bulldogs, and they may have nearly equal the versatility.

What the Hawkeyes (22-11) don’t have is the pressure of big expectations. Friday was their first tournament win since 2001. The Zags have, in the opinion of most Zags watchers, their best team in school history. meaning it’s now time.

Shootist Kyle Wiltjer, a transfer from Kentucky of the Southeastern Conference, is among the few Zags who can speak with some authority on conference comparatives. Naturally, he was eager to minimize differences Saturday.

“It’s really not that much different, the two conferences,” he said. “Everyone tries to say there’s a big difference. But being in both of them, every team’s going to give you your best shot. So for us, it wasn’t a cakewalk.

“We were (17-1), but each game was tough. Everyone’s giving us their best fight and we also had a really strong preseason. So we got to play some teams and kind of test out our skills against them.”

True. And they lost to their most formidable non-conference foe, Pac-12 champ Arizona, 66-63 in OT. But they also had their share of cupcakes in Sacramento State, Texas Southern, and Cal Poly, fattening up just like all the other power conference schools.

For years in Spokane, it has been a dilemma: Do the Zags schedule home-and-homes with high-RPI teams to buff the resume but risk losses, or go cupcake for a 30-win season?

“The games within our conference, I think, are tougher and harder than maybe the general perception understands,” he said. “To start with that, I think BYU’s an excellent team and they’re really difficult to play (BYU was the other team to beat Gonzaga). At the same time, (conference strength) is also night-in and night-out. We’re not playing Michigan State, we’re not playing Maryland, we’re not playing Iowa, we’re not playing Ohio State. So, it is different.

“We spend tons of time on (nonconference scheduling) and really are very careful about who we’re playing, especially home-and-homes. We just kind of play for ourselves and for Gonzaga . . . I don’t know if we think too much about our conference affiliation. We kind of just try to let our brand stand on its own.”

And as far as the notion of the Gonzaga brand standing on its own, that’s also true, which is why the NCAA tourney is more nearly a one-game season for Gonzaga than any other. No one’s path is less rocky.

“I think the days of anyone even remotely trying to refer to them as a mid-major program,” he said, “is somebody that’s clearly not tuned into the college basketball world.”

But until the Zags are called champions, they will be defined as the team with one-game seasons.