Gonzaga is sick of talking about why it can’t make the Sweet 16. Sunday, the Bulldogs answered the doubters with a convincing win. Louisville also advanced. 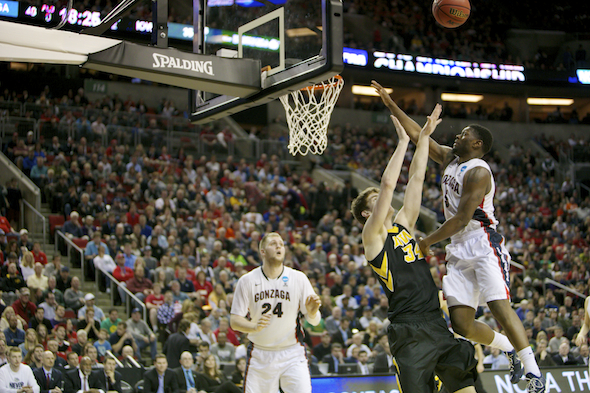 Inside a cramped KeyArena locker room, Gonzaga senior guard Gary Bell Jr. sat and admitted what many who followed the Bulldogs over the past five years were thinking.

In whipping No. 7 seed Iowa,  87-68, Sunday in the third round of the NCAA tournament, the No. 2 seed Zags removed a two-ton elephant from their backs.

After five consecutive years of NCAA second-game exits, Gonzaga (34-2) is back in the Sweet 16 for the first time since 2009.

“If anybody says they weren’t thinking of that, they’re lying,” said Bell, a Kentridge High School graduate. “I definitely wanted to get over this hump.”

The Zags now have a tournament win in seven consecutive seasons. And Gonzaga coach Mark Few now gets a temporary respite from the “why can’t you make a deep run in March” question that’s irked him during almost all of that span.

The drought is over.

“Personally, yes,” Few said. “I think the program’s been six times (to the Sweet 16), and it’s just interesting to see the corner that we’re being painted into. I don’t know who (else) is being held to that standard.”

Well, Gonzaga is. It’s based on the program’s success and shortcomings. Top 10 rankings come with postseason expectations.

“We just wanted to do it selfishly for ourselves and our fan base,” said guard Kevin Pangos after scoring 16 points and burying four 3-pointers against the Hawkeyes. “We believed that we were good enough and we just wanted to experience this. So it feels awesome.”

For much of Sunday, the Zags, paced by F Kyle Wiltjer’s team-leading 24 points and seven rebounds, couldn’t miss. They quickly put a charge into the pro-Bulldogs crowd by starting the game 10-for-13 (77 percent) from the field and 4-for-5 from 3-point range.

Wiltjer was perfect during the first half, making all five shots, three of which were from distance, en route to 13 points. He didn’t miss until there was 8:58 left in the game.

Making the feat more impressive: He played only 25 minutes because of foul trouble.

“If it’s a good team shot and I missed my last two, to be a good shooter you have to have the confidence to shoot the next one,” Wiltjer said. “When you get on a roll and my teammates do such a good job of finding me, you just get more and more confident. That’s what I was doing in the first half.”

The Zags shot 61.5 percent from the field, second-best percentage of the NCAA tournament behind Duke’s 63 percent mark in its second-round win over No. 16 seed Robert Morris.

Iowa had the best field goal defense (39 percent) in the Big Ten.

It helped that freshman F Domantas Sabonis came off the bench to score 18 points and grab nine rebounds. Teaming with C Przemek Karnowksi, the Zags worked it inside-out and back in, finishing with 20 assists on 32 field goals. They never trailed, led 46-29 at half, made 10 of 16 from beyond the arc and committed a manageable 11 turnovers.

When Iowa began the second half on an 8-2 run to cut the lead to 11, Pangos answered with a three.

“It’s without a doubt the best offensive team I’ve ever been associated with,” Few said. “The firepower, the versatility, the ability to share the ball. Lost, kind of, in all this, we have taken unbelievable care of the ball tonight — or not tonight, but all year. And that was a big key.”

There was considerable outrage when the selection committee let UCLA in the NCAA tournament, then even more when it beat sixth-seeded Southern Methodist in the second round on a controversial goaltending call. The Bruins then had the good fortune of playing (and beating) Alabama-Birmingham in the third round after it upset No. 3 seed Iowa State.

That means Gonzaga will be inundated this week with questions about their collapse against the Bruins in the Sweet 16 in 2006. The lasting image of Adam Morrison laying on the court, hands over his face, weeping, with time remaining on the clock, will be played on loop.

Morrison remains close with the program. The reclusive former NBA flameout was spotted in Few’s office post-game, while players reveled inside the locker room.

Few and Co. can squash questions about Morrison this week, too. Just stay alive.

“It’s just a great feeling to get over it,” Bell said. “But now we have to keep winning.”

Louisville 66, Northern Iowa 53
Sophomore guard Terry Rozier scored a game-high 25 points, junior forward Montrezl Harrell added 14 and a few high-flying dunks and No. 4 seed Louisville beat No. 5 seed Northern Iowa, 66-53, in the evening’s second game of the third round of the NCAA tournament.
The Cardinals used multiple defensive sets to hold Missouri Valley Conference Player of the Year Seth Tuttle to 14 points on 4-of-7 shooting. The Panthers converted just 39.1 percent of their attempts, including 6 of 19 from 3-point range.
The win propels Louisville (26-8) to the Sweet 16 for the fourth year in a row, a first for the program. It also improved coach Rick Pitino’s career NCAA tournament record to 52-17. The Cardinals next play eighth-seeded North Carolina State Friday at 4:37 p.m. PT at the Carrier Dome in Syracuse, NY.
They made it there by shooting 45.8 percent after a season in which points were hard to accumulate. Senior forward Wayne Blackshear added 10 points, as did freshman guard Quentin Snider.
“We played really great offense tonight,” Pitino said. “I’m so, so proud of our guys, because we haven’t been a great offensive team, and tonight we were because of our spacing and our ability and Tony Rozier.”