After a decade of teetering between being mediocre and just plain bad, the Mariners are a trendy pick to make the 2015 World Series. 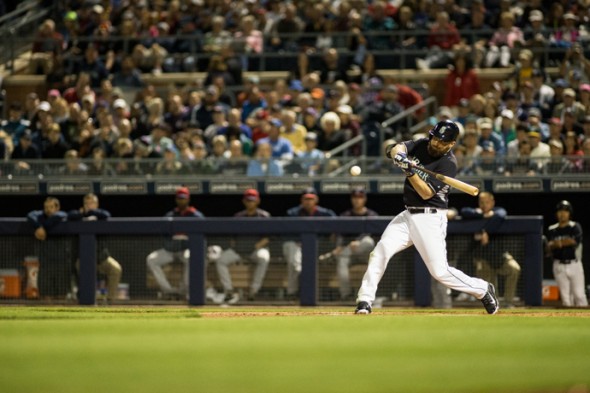 The love: It just continues.

After finishing a game short of the second American League Wild Card in 2014, the Mariners have emerged as a sort of national media darling following the off-season acquisitions of reigning MLB home run champion Nelson Cruz, RF Seth Smith and utilityman Rickie Weeks, among others.

There was this from former Seattle Post-Intelligencer scribe Jim Caple, now of ESPN.

Finally, the news came Tuesday that RHP Felix Hernandez and 2B Robinson Cano will grace the cover of Sports Illustrated’s regional cover for its baseball season preview.

The headline: “Time to Believe.”

It will be available for SI subscribers and on sale in Alaska, Hawaii, Washington, Oregon, Idaho, Nevada, California, Utah and Arizona. The other teams featured on the regional covers are the Washington Nationals, Cleveland Indians and Kansas City Royals.

For the Mariners, this is new ground.

It’s also a welcome development for an organization that hasn’t made the playoffs since its 116-win regular season in 2001, has never been to a World Series and still has many fans in “wait and see” mode after being disappointed by a bad product over the past decade.

But manager Lloyd McClendon thinks the Mariners took a major step when they went 87-75 last season despite possessing a paltry offense that ranked near or at the bottom of the AL in the statistical categories that matter most (see runs, OPS, on-base percentage, batting average, in that order).

“Last spring I would say we were learning how to win,” McClendon said in Caple’s ESPN story. “I think this spring we expect to win. And that’s a big difference.”

No shocker: RHP Hisashi Iwakuma, who went 15-9 with a 3.52 ERA last season, got by relatively unscathed in a Monday start for Triple-A Tacoma against Round Rock in Peoria.

Iwakuma struck out eight, walked one and allowed two runs and six hits over five innings. Of his 72 pitches, 44 went for strikes.

“Outstanding,” McClendon said. “He threw the ball extremely well. Great command of the split. The fastball was in and out, up and down. He really commanded the zone very well.”

Why did Iwakuma pitch for the Rainiers?

McClendon didn’t want to give the Angels a glimpse of him before he faces them when Seattle opens the regular season with a three-game series against Anaheim at Safeco Field. Iwakuma is set for two more spring training starts, then will pitch the third game of the regular season, according to The News Tribune.

The Erasmo Ramirez experiment is likely nearing its end.

The embattled right-hander made it only 1.2 innings and gave up four runs, two earned, Monday in a 5-0 loss to the Angels in Tempe. From the outset of camp, Ramirez, 24, had no more than an outside shot to make the 25-man roster because of a loaded bullpen and a starting rotation set to feature Hernandez, Iwakuma, LHP James Paxton, LHP J.A. Happ and either RHP Taijuan Walker or LHP Roenis Elias.

Ramirez, 24, doesn’t have a minor league option, so he would have to clear waivers to pitch for the Rainiers. A trip to the waiver wire means he’d likely be signed by another club.

Tough to say that he’ll be missed.

Happ struggles in loss to Padres

McClendon has already said Happ will be in the starting rotation after the Mariners traded RF Michael Saunders to the Toronto Blue Jays for the veteran in December.

It appears the southpaw is still trying to find his rhythm.

CF Austin Jackson went 2-for-3 with a double, an RBI and a run to lift his spring average to .351. Smith also added two hits, including his first home run in Cactus League, and two RBIs. His homer came in the third inning off San Diego RHP Andrew Cashner.