Shorthanded Tuesday night due to international call-ups, the Sounders and top-tier Club Tijuana from Mexico drew in an international friendly at the Clink. 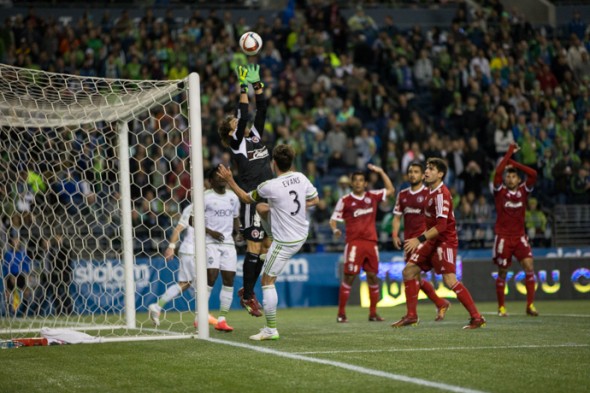 Lamar Neagle (11th minute) and Andy Rose (56th) tallied goals as the short-handed Sounders rallied for a 2-2 draw with Club Tijuana of Liga MX in an international friendly Tuesday night in front of 39,115 at CenturyLink Field. Second-year Homegrown Player Aaron Kovar, who served up numerous well-placed crosses, assisted on both goals.

The Sounders played without forward Clint Dempsey and midfielder Marco Pappa. Dempsey is out two to three weeks with a hamstring injury suffered while training with the U.S. National Team. Pappa is serving international duty with Guatamala.

“Obviously there are some guys who didn’t play tonight because of injury concerns,”   Schmid said. “You get into those stretches of games where you have to rotate your squad a little bit, so it gives you an opportunity to see who can step up to that level of competition, who can hold his own.

“I thought Aaron Kovar had some really good moments. I thought Cristian Roldan played well tonight in the wide right and middle of the midfield. I thought Andy Rose came off the bench (and did well). We wanted to keep guys who we knew were (gong to play) in Dallas around 45 minutes, 60 at the max.”

In the 11th minute, Kovar sent a cross from the left flank to the far post, where Cristian Roldan slipped behind a defender, got a head on the ball and played it back to Neagle, unmarked in the middle of the box. On Rose’s goal, Kovar sent in another cross from the right side and the ball made its way toward the far post for Rose’s tap-in.

Neagle’s goal provided Seattle a 1-0 lead. Tijuana’s Dayro Martino equalized in the 22nd minute, first blazing a shot off the far post before finishing the rebound at the endline. Tijuana took the lead six minutes later on a goal by midfielder Richard Ruiz.

Club Tijuana, missing seven players summoned to international duty, managed just five shots over the 90 minutes, including only one in the second half, and never threatened to re-take the lead after Rose scored.

The start was delayed 23 minutes for late-arriving fans caught in a horrendous traffic snarl after a truck trailer overturned on southbound 99 about 200 yards south of the Clink at 2:30 p.m. The trailer was still on the road bed at 11 p.m. . . . Seattle is 1-0-1 against Liga MX clubs in international friendlies and 4-6-2 against Mexican sides in all competitions . . . Six Sounders made their first-team debuts Tuesday. Rookie defender Oniel Fisher started and played 64 minutes at right back, while five others came on as substitutes in the second half, including Victor Mansaray, Andres Correa, Jimmy Ockford, Darwin Jones and Damion Lowe.

After a bye in MLS last weekend, the Sounders (1-1-0) return to regular-season action Saturday at FC Dallas, which is undefeated after its first three league matches.