Not that long ago, Zags were a nowhere team

Gonzaga is a big deal now, but coach Mark Few can recall when the program was a loser, and coaches found themselves sleeping on hotel-room floors. 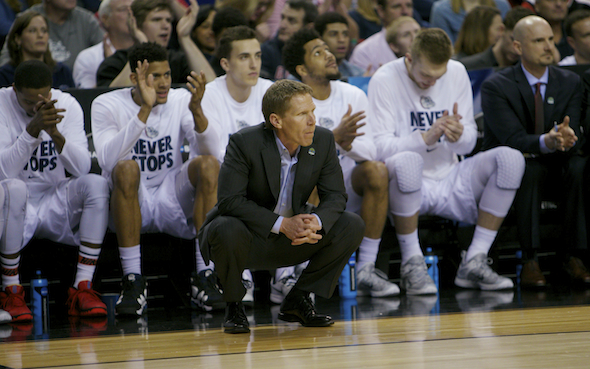 After Sunday’s win that sent Gonzaga to the round of 16, coach Mark Few attempted a celebratory handstand in the KeyArena locker room. / Drew Sellers, Sportspress Northwest

SPOKANE – Gonzaga basketball is big-time. No question about it. The Bulldogs take charter flights, stay at the finest hotels, televise all games, sell out every home game at their beautiful arena.

Relative newcomers to the Gonzaga bandwagon may find it difficult to fathom, but the Bulldogs never played in an NCAA tournament until 1995. Back then, Gonzaga regularly scheduled small colleges like Whitman, Eastern Oregon, Whitworth and Western Montana. Home games often drew intimate gatherings at the Martin Centre, a tiny gym more suited for a high school.

Head coach Mark Few arrived at Gonzaga as a graduate assistant coach just in time to watch the Bulldogs finish 8-20 and come in last in the West Coast Conference in 1989-90. Four years later, Gonzaga won the WCC and played in the NIT for the first time. The following year, in 1995, the Bulldogs went to  the NCAA tournament and were officially big-time.

Or so they thought. When the Bulldogs arrived in Salt Lake City for their historic tournament debut (an 87-63 loss to Maryland), they were properly underwhelmed by the lodging arranged for them by the NCAA. The Zags sagged when they saw the worn “Ma and Pa” motel where they were booked.

“It was the kind where you drive up right to the rooms and the headlights shine in,” Few recalled with a smile.

Few loves to reminisce about the not-always-so-good-ol’ days at Gonzaga, but not so much that he cares to repeat them. That includes all the nights when cash-strapped GU assistant coaches slept on floors or couches in the hotel rooms of sympathetic rivals. Few remembers when GU coaches would save on rental cars by driving around in an old car stored in a San Francisco garage.

Few has been at Gonzaga so long, he actually remembers when winning wasn’t taken for granted. Many fans and members of the media have become numb to Gonzaga’s overwhelming success in the WCC.

They’re quick to point out that Few – who has steered the Bulldogs into the NCAA tourney all 16 years he’s been head coach – has never made it past the Sweet 16.

The Bulldogs, whose lone Elite Eight appearance came in 1999 in Few’s final season as an assistant coach to Dan Monson, can return to the Elite Eight with a win over UCLA on Friday in Houston. KIRO 7 televises the game at 4:15 p.m.

Gonzaga (34-2), seeded second in the South Region, beat the 11th-seeded Bruins (22-13) handily at UCLA in December. Gonzaga is ranked seventh and UCLA is unranked, and Las Vegas lists the Bulldogs as 8½-point favorites, but Few will hear none of that.

“We’re not going in as favorites,” Few insisted after Tuesday afternoon’s practice at the McCarthey Athletic Center. “We’re going in as an ‘even’ team. That’s our mindset.”

The young Bruins have improved since December, but Gonzaga’s veteran squad may have played its best game of the season in Sunday’s rout of Iowa in Seattle. Few, who carefully hides his emotions from public consumption most of the time, was caught on video making a terrible attempt at a handstand in the victorious locker room at KeyArena.

Gonzaga students are now performing handstands all over campus – “Do the Few” they call it – thanks to a Twitter video of Few’s handstand sent out by star forward Kyle Wiltjer.

Few did say he believes Gonzaga players have not always savored wins as much as they should in recent years due to high expectations of fans and media.

“Expectations just seems to suck the life out of them,” Few said.