Boosted by owning their own regional sports network, Root, the Mariners’ franchise value jumped 55% over the previous year, according to Forbes. 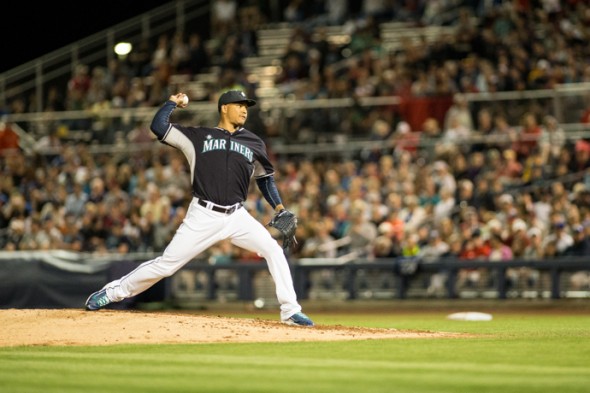 The Mariners, aided by winning, owning their own TV network and developing quality young talents such as RHP Taijuan Walker, saw the value of the franchise go up 55 percent. / Drew McKenzie, Sportspress Northwest

The Seattle Mariners are worth an estimated $1.1 billion, according to Forbes magazine’s annual franchise valuation of Major League Baseball’s 30 teams.

That represents a 55 percent increase over the past fiscal year, according to the Wednesday report, but the Mariners still rank 14th in MLB, two spots lower than the magazine’s 2014 estimate.

The boost comes primarily from the organization’s lucrative regional sports network, Root. Forbes says the deal will provide the Mariners an average of $103 million annually over the next 18 years. The total value of the deal, when the team’s equity stake is included, is about $2.5 billion, according to Forbes.

The organization’s operating income — defined as earnings before interest, taxes, depreciation and amortization — was $26.4 million. That ranked 12th.

The New York Yankees topped the list with a value of $3.2 billion, while the Los Angeles Dodgers came in second at $2.4 billion. Third was the Boston Red Sox at $2.1 billion. Fourth went to the reigning World Series champion San Francisco Giants, worth $2 billion. The latter represents a 100 percent increase since last year’s estimate, first among MLB teams.

The Los Angeles Angels rank first in the division ($1.3 billion).

In its report, the magazine said that if MLB was traded on the stock exchange, it would be worth $36 billion. The average franchise is worth $1.2 billion, up 48 percent from last year, which marked the biggest year-over-year increase since Forbes started doing these estimates in 1998. After five MLB teams were worth at least $1 billion in 2014, there are now a record 15.

“Overall, baseball has never been as big or as profitable,” wrote author Mike Ozanian.

Here’s the link to the full report.

Walker stars in 3-2 win over Cubs

RHP Taijuan Walker just about locked up the No. 5 spot in the rotation Wednesday with a two-hit shutout over six innings in a 3-2 over the Chicago Cubs in front of 11,224 fans at Peoria Stadium.

He struck out six and walked one in his best outing yet. He has not allowed a run in five starts over 18 innings. The Mariners’ lowest spring training ERA in club history belongs to left-hander Matt Young who had a 0.44 ERA (1 ER, 20.1 IP) in 1983.

The Mariners evened their Cactus League record at 10-10-2.

Kyle Seager plated a run in the first with a bases-loaded sacrifice fly. In the fifth, Mike Zunino celebrated his 24th birthday with an opposite-field solo homer, No. 4. Later in the inning, Robinson Cano doubled home Austin Jackson.

Cora to throw out first pitch

The Mariners will honor a popular former player when Joey Cora throws out the ceremonial first pitch in the regular season opener April 6 against the Angels at Safeco Field.

The former second baseman played in Seattle from 1995 until the club traded him to the Cleveland Indians Aug. 31, 1998 for 3B David Bell. Cora, a fiery player who Hall of Fame pitcher Randy Johnson once referred to as “our sparkplug,” posted a .293/.355/.406 slash during his tenure with the Mariners.

Only scattered single tickets remain for the season opener. Fans who make a more substantial investment can get opening day tickets by buying season tickets, 20-game plans or a 10-game flex pack. Here’s a link to the offers.