The Bruins, the team nobody wanted in the NCAA tourney, wants everyone to forget why — an 87-74 crushing by Gonzaga in December. 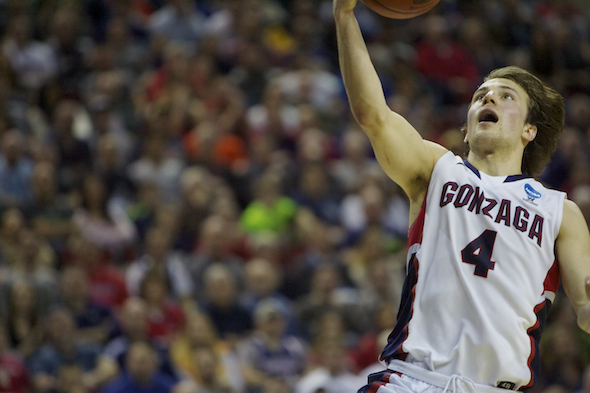 Gonzaga played a basketball game at UCLA on Dec. 13. The Bulldogs won handily, 87-74. Honest. It made the news.

It’s a good thing stats were kept that day at Pauley Pavilion, because the Bulldogs and Bruins have done their best all week to act like the game never took place. Both teams have been adamant that the first meeting will have little impact on Friday’s rematch in the Sweet 16 round of the NCAA tournament in Houston (4:15 p.m., KIRO 7).

“That game has nothing to do with the game we’re playing Friday,” Gonzaga guard Eric McClellan said.

“We’re a much, much better team now than we were in December,” UCLA coach Steve Alford said.

UCLA’s young squad (22-13) has improved significantly since the December mismatch with a veteran Gonzaga team (34-2) that also has progressed. The Bruins have won six of their past seven games, losing only to Arizona. The Wildcats, currently ranked fifth, are one of two teams (along with unranked BYU) that own a three-point win over the seventh-ranked Bulldogs.

Alford stresses that his unranked Bruins are “vastly different” than the team Gonzaga faced three months ago – offensively, defensively and mentally. Still, he says that might not be enough to knock off the Zags.

“They’re really only about two, maybe three possessions away from everyone in the country talking about them like you talk about (unbeaten) Kentucky,” Alford said. “That’s how close they are to being undefeated.”

The Bulldogs are led in scoring by 6-foot-10, 240-pound forward Kyle Wiltjer, one of the most versatile scorers in the college game, though he’s drawing little interest from NBA scouts. The junior transfer from Kentucky averages 17.1 points and shoots 54.8 percent from the field, including 47.9 percent on 3-pointers. He’s topped all those numbers thus far in the tournament.

“He’s awesome offensively,” said Przemek Karnowski, Gonzaga’s 7-1, 288-pound center. “He can do anything.”

Few has told the story before, but he entertained the media in Houston on Thursday with the background on Gonzaga’s recruitment of Wiltjer out of Jesuit High School in Portland.

“I literally recruited Kyle for 2, 2½ years, and Cal (famed Kentucky coach John Calipari) made one phone call and he committed. So, don’t underestimate the power of Cal and Kentucky,” Few said.

“It was as amiable and up-front and professional a deal as I’ve ever been involved with, because Cal and I are really, really good friends. We probably talk once a week, and Kyle handled it really well.”

Wiltjer, a valued reserve during his two seasons at Kentucky, said he transferred to Gonzaga because he thought his game would benefit from the move (and, presumably, from increased playing time after an NCAA-mandated redshirt year last season). Few and Calipari were kept in suspense about Wiltjer’s future when he went to China in the summer of 2013 with Canada’s developmental national team.

“No communication whatsoever,” Few recalled. “You couldn’t e-mail him, couldn’t text, couldn’t call. Just no — I don’t know what the deal was. Communism or something.

“I don’t know what the heck is going on. Nothing. Nobody really knew what was going on. And Cal and I ended up at a Nike recruiting event in Washington, D.C. We were sitting next to each other watching the games: ‘Have you heard anything?’ ‘No, how about you?’

“While we were sitting together, we both got texts from Kyle. He said he made his decision. And again, Cal handled it just unbelievably with grace and dignity. He was genuinely happy: ‘You’re getting a great player. I wish we had him. He’s going to do really, really well for you.’”

As good as Wiltjer has been, the Player of the Year in the West Coast Conference was Gonzaga senior Kevin Pangos, whom Alford said “is about as good as it gets at the point guard position.” Alford also offered high praise for Gary Bell Jr. and USC transfer Byron Wesley, the two other seniors who complete Gonzaga’s starting backcourt.

“I think those three really are what this team is about,” Alford said.

Mind you, Gonzaga’s three primary big men – Wiltjer, Karnowski and super sub Domantas Sabonis – combine to shoot nearly 60 percent from the floor. The Bulldogs lead the nation in field-goal shooting percentage at 52.6, rank third in 3-point shooting at 41.0 percent and stand sixth in scoring at 79.5.

“Defending them is one thing,” Alford said. “Trying to score enough points to stay up with them is another thing. We have to be really good at both ends of the floor.”

Gonzaga holds the edge over UCLA in most team statistics, but the Bruins played a tougher schedule in the Pac-12 Conference than the Zags faced in the WCC. The Bulldogs have more experience, size and depth than the Bruins, but all of UCLA’s starters average 10.6 points or more.

“You can put that starting five against anybody’s in the country,” Few said.

UCLA mixes zone and man-to-man defenses and will trap and press at times. The Bruins have certainly improved on defense since that forgettable December contest, when they were badly outplayed much of the way in their only home loss of the season.

Alford drained nine 3-pointers for all 27 of his points in a 60-59 win over SMU last Thursday. Alford’s final shot, the game-winner, came on a goaltending call. Most observers believe the ball would not have gone through the hoop, but the official’s call was the correct one.

Many critics panned the tournament selection committee for inviting UCLA, but the 11th-seeded Bruins – despite losing five players to the NBA off last year’s team — have reached the Sweet 16 for the second year in a row. The Bulldogs, the No. 2 seed in the South Region, have advanced to the Sweet 16 for the first time since 2009.

Speaking of critics, the Bulldogs realize they won’t quiet some of theirs if they don’t reach the Final Four – at least. For all their accomplishments over the past two decades, the Zags have only made it as far as the Elite Eight once, in 1999. Few took over the following season and has guided the Bulldogs to 16 consecutive NCAA tournaments, including five Sweet 16’s, in 16 years as head coach.

“It’s awesome to still be involved (in) what I consider the greatest sporting event in the world,” Few said. “Our guys are excited, staff is excited, and I think the reason we’re so excited is this has just been an unbelievable team to be associated with on a daily basis, whether it’s travel or game planning or practicing or actually playing in the games.

“It’s just been a real joy, and obviously we just want to keep that thing going as long as we possibly can.”

Few has stopped short of labeling his current team the greatest in school history, but he does say this year’s crew is the best offensive team. The Bulldogs have already set a school record for wins. If they beat UCLA and win Sunday against Friday’s Duke-Utah survivor at NRG (formerly Reliant) Stadium, they’ll be headed to Indianapolis for the Final Four.

“I feel we match up well with anybody in the country,” said McClellan, a Vanderbilt transfer who played well off the bench last weekend. “We’re long, athletic. Offensively, we have so many different weapons.”

The Bruins have a few of their own. Five, to be exact. UCLA’s sixth-leading scorer, 7-foot freshman Thomas Welsh, averages just 3.9 points per game. Fortunately for Coach Alford and the Bruins, Gonzaga can only put five players on the floor at one time.

“If we get better this week,” Alford said, “then I like our chances.”