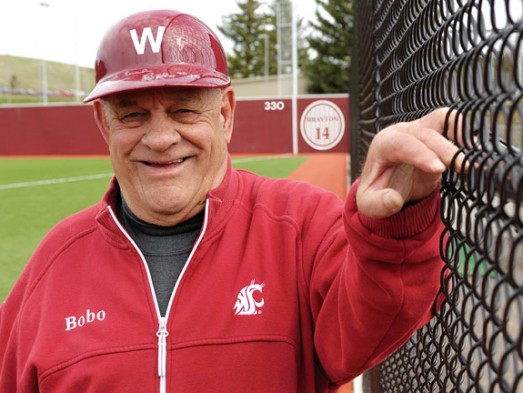 “Bobo, he was larger than life,” Olerud once said. “Just a legend.”

Even legends can’t go on forever. Chuck “Bobo” Brayton, one of the true legends of Pacific Northwest sports, died Saturday morning in Pullman. He was 89 and had been in failing health in recent years.

Brayton survived the Great Depression, World War II, heart trouble, a life-threatening skull fracture and a multitude of other health problems to live a life that sounds like something manufactured in Hollywood.

Brayton grew up in poverty in tiny Birdsview, WA., east of Mount Vernon, during the Great Depression. He was 10 when his father was killed in a logging accident, so he would rise early in the morning to milk cows to help his mother pay the bills and care for her six children.

After starring in six-man football at old Hamilton High School, Brayton hitch-hiked to Pullman, rented a room in the local fire station for $25 a month and went on to letter in football, basketball and baseball at Washington State College in the 1940s. He split up his college days by serving two years in the Army Air Corps, then married a pretty co-ed when he returned to Pullman. Eileen Brayton was her husband’s best friend and biggest fan for 67 years.

The numbers compiled by Brayton at Washington State from 1962-94, including a 1,162-523-8 (.680) record and 21 conference championships, are so grand they are difficult to grasp. To gain a sliver of perspective, consider the fact that Buck Bailey, Brayton’s coach and predecessor, coached the Cougars  for 32 years and ranks second in school history with barely half as many wins (603) as Brayton compiled in 33 years.

Two coaches in 65 years. Oh, how times have changed, at WSU and pretty much everywhere. In the first 10 years after Brayton retired, the Cougars hired three coaches in fruitless attempts to replace a man who helped develop 23 of the 32 Cougars who have made it to the major leagues.

Big leaguers coached by Brayton include Olerud, Ron Cey, Aaron Sele, Scott Hatteberg, Tom Niedenfuer and Danny Frisella. Brayton took a chance on a skinny kid from Bellevue, and Olerud rewarded him by earning national college player of the year honors in 1988. That’s one of countless reasons why Brayton was inducted into the National College Baseball Hall of Fame, the State of Washington Sports Hall of Fame and the WSU Athletic Hall of Fame.

Brayton’s gravelly voice could often be heard on radio commercials during WSU baseball broadcasts. Listeners are still recovering from the sound of Brayton’s truly horrendous Mexican accent in commercials for a Mexican restaurant.

As a player, Brayton was a fiery shortstop who became WSU’s first baseball All-America in 1947. As a coach, Brayton guided his 1965 and 1976 teams to the College World Series. The Cougars haven’t been back since, their path to Omaha blocked by schools blessed with far more sunshine and/or nearby talent than is available to the Cougars.

Brayton ran his baseball program with an iron fist and, once you earned his respect, a heart of gold. He was a stickler for fundamentals, demanded loyalty and grit from his players and boy, did he compete. Witnesses will never forget the sight of Brayton charging across the diamond to head-butt Oregon State coach Jack Riley during a heated argument.

Brayton, of course, was smart enough to wear his batting helmet during the confrontation. Brayton always wore a helmet on the field after he almost died from a skull fracture suffered when he was struck by a line drive while throwing batting practice as the coach at Yakima Valley Community College in 1959.

Before and after the smashed noggin, Brayton’s bald head contained a wealth of baseball knowledge. Now that knowledge is gone, never to be replaced.

“You’re no better than the people in the program and the people in the town,” an emotional Brayton told WSU fans during a post-game ceremony after he won game No. 1,000 in 1990. “I’ve been luck to have great people around me.”

Brayton loved to say, “Go Cougs!” That seems like an appropriate greeting when he takes a seat in the dugout next to the other baseball gods.