If Zags had won, they had a shot to join Seahawks and Oregon Ducks in a rare NW realm — finishing 2nd nationally. No trophy, but the vision of empire is fairly shared. 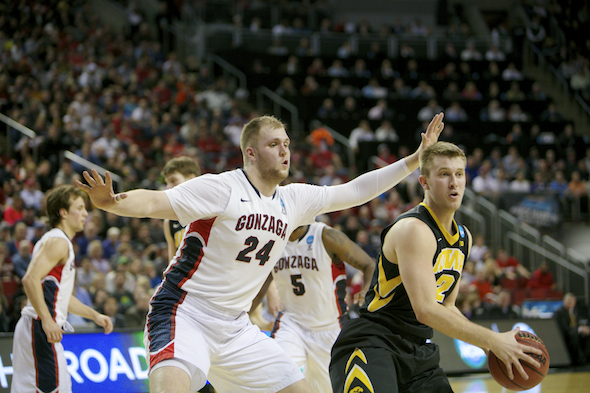 Independent of any rooting interest, it would have been fun to see Gonzaga make college basketball’s Final Four, just to hear yet another round of broadcasters, writers and opposing players call them Gon-ZAH-ga. Then watch the faces of Bulldogs boosters get all pinched up again.

More intriguing: If the Zags had won Sunday against Duke, then beat Michigan State in the Saturday semifinals in Indianapolis, they would have been in splendid position to do what the Seattle Seahawks did in pro football and the Oregon Ducks did in college football:

What an odd feat it would have been: The Northwest would be home to runners-up in the most recent three major team sports championships. The Seahawks finished a close second in the NFL to New England, and the Ducks were smacked by Ohio State in the first real national championship in big-time college football. Gonzaga would almost certainly have lost to Kentucky.

We’ll never know. But after the final five minutes in Sunday’s 66-52 loss to Duke in Houston, it’s clear the Zags were a step down from the top in college hoops. Yet theologians would have a hard time finding evidence in the Bible that finishing second is a sin.

I realize that, from 50 feet up, most fans only care about their team; overlaps can be small, especially regarding college sports, and second is not winning. This is, after all, America.

But if you care to rise up to 30,000 feet up with me, the fact that three Northwest standard-bearers came so close in the same sports year is fairly remarkable.

Beyond the coincidence of geography, there is some broad connectivity: The Seahawks, Ducks and Bulldogs share visions of empire and already have succeeded in some ways.

The Seahawks’ ideology is most familiar and popular, since Ducks fans and Zags fans typically love them some Seahawks too.

Coach Pete Carroll and John Schneider believe in a ruthless but clear mantra of “always compete,” meaning only a player’s deeds, not in-house politics or contract size, determine roster and starting spots. They also believe in playing young players early, and allowing fun to be a value, not an accident.

In the Saturday run-up to Sunday’s game against Duke, Gonzaga coach Mark Few offered up a salute to the Seahawks’ paradigm, saying he borrowed a few concepts applicable to any sport.

“We’re huge Seahawks fans,” Few said. “I followed coach Carroll back to when he was at USC. He does a phenomenal job with making it fun for the players, having them feeling extremely relaxed yet extremely confident.”

The Ducks have won four of the past six Pac-12 championships and, as Huskies fans love to read, have beaten Washington, one-time king of the Northwest, 11 consecutive times. While it’s certainly true that that the Ducks, thanks to evil king Phil Knight, have spent their way to the top via facilities, it’s all permissible by what the NCAA, with a straight face, calls the rules of amateurism.

As with Gonzaga in Spokane, the Ducks in Eugene are not in a population base loaded with talent, nor in metropolitan areas. Both programs built step by step, making relatively few recruiting errors and no NCAA violations that were detected. Winning seasons begat championship seasons, to the point where the Zags have been to 17 consecutive NCAA tourneys, and for the second time made the round of eight.

The upshot is that Gonzaga and Oregon have become desirable schools for premier players, or at least for good players who can be coached up — much like the Seahawks. All three have benefited from finding players overlooked by others who can be taught how to catch up.

Success now breeds success — quality players sought by multiple rivals often break ties by favoring the team that has the chance for national success sooner than later. Lately, that has been the Seahawks, Ducks and Bulldogs.

Huskies fans aren’t about to give credit to either the Ducks or Zags, the latter resuming its basketball series next season against Lorenzo Romar’s lately woebegone outfit. But that’s OK — I can’t expect college sports fans to see beyond the bottom of the beer cans they’re chugging.

I realize that finishing second is, in the soporific rhetoric of American sports, a numbing deed, unworthy of parade or poetry. But being in the championship conversation on an annual basis is a worthy feat, and to have multiple Northwest teams so engaged should justify all the resources expended on face paint and game tickets.

Empires have been established. We need only the shimmering Kate Upton astride her steed to take up the conquest.

Next up: Mariners and Sounders, to whom second would be a thrill of novelty.