Long-haired SS Brad Miller will likely be sporting a new, more traditional look by the time the Mariners start the regular season Monday. 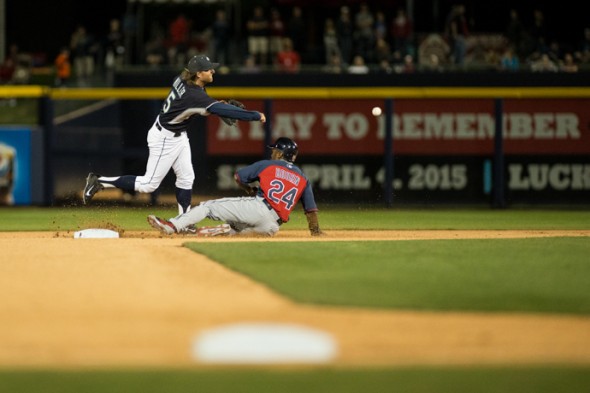 After an off-season spent growing out his hair, Mariners SS Brad Miller is being forced to trim it. / Drew McKenzie, Sportspress Northwest

In what some may construe as an attempt to limit personal expression, Mariners manager Lloyd McClendon has ordered SS Brad Miller to cut his hair.

While fans of Keanu Reeves, Tim Riggins and The Doobie Brothers are sure to be disappointed, it was probably for the best. In a Monday profile in The News Tribune, longtime baseball beat writer Bob Dutton aptly compared Miller to a romance novel cover boy.

That Miller’s hair style is making headlines is probably a sign that it’s time for the regular season to start. The Mariners have three exhibition games remaining before they kick off the season Monday afternoon against the Los Angeles Angels at Safeco Field.

Miller will undoubtedly start that game after an eventful past month. He won the starting shortstop job when Chris Taylor was hit by a pitch and broke his right wrist in mid-March. Taylor is likely to start the regular season on the 15-day disabled list, which gives the 25-year-old Miller first dibs on the starting job after posting a .221/.288/.365 slash line in 2014 with 10 home runs and 36 RBIs in 123 games.

First, he needs to recover from a weekend spent dealing with flu-like symptoms, which caused him to miss three games before he returned to the lineup Monday.

“Friday, I woke up in the middle of the night and lost everything,” he said. “We had a night game. I came to the (complex) around 10, and they immediately hooked me up with an IV.

“I was there for an hour and a half, just getting filled up. I’m trying to build back up. I probably lost five pounds. Hopefully, in three or four days, I get back to normal.”

Ace RHP Felix Hernandez capped an uncharacteristic spring Tuesday when he allowed seven runs over 1.2 innings in the Mariners’ 8-6 loss to the Cleveland Indians at Goodyear Ballpark.

“Today was not good,” Hernandez told MLB.com. “I couldn’t get my balance. I was like falling back. I couldn’t feel my legs. I don’t know.  I don’t know. It’s correctable, for sure. I wasn’t even turning. You could see it. The mound was a little weird. But I’m fine.”

The loss dropped Hernandez to 0-3 with a 10.22 ERA in four Cactus League starts after he finished the 2014 season second in the American League Cy Young race. He threw 47 pitches, 29 strikes, and had erratic command, with two walks and a hit batter. He gave up four runs in the first inning, two via a home run from 1B Brandon Moss, and bowed out in the second after allowing an RBI double from CF Michael Bourn and a two-run double to Carlos Santana. He also hit Michael Brantley.

“Physically everything was fine,” Hernandez said. “Mechanically was the problem. I was up. I was up the entire game, Well, not even the entire game. The 1 2/3 (innings).”

This after the Mariners built a three-run lead in the first inning on a solo home run from utility man Rickie Weeks and a two-run shot from DH Nelson Cruz.

McClendon, who was ejected Tuesday, wasn’t worried about Hernandez after Seattle dropped to 11-16-2 in Cactus League. He even referenced a recent lower body workout that Hernandez completed that could have disrupted his rhythm.

“He’s going to be fine,” he said. “This is a spring training game. That’s the way it goes.”

Hernandez won’t pitch again until Monday, when he makes the eighth opening day start of his career.

Bad springs haven’t always been a bad omen for “The King.”

The Mariners released OF Franklin Gutierrez and LHP Joe Saunders from their minor league contracts and both opted to re-sign with Triple-A Tacoma, the club said Tuesday.

Gutierrez, the club’s starting center fielder before numerous health problems derailed his career, played in two games this spring and didn’t record a hit in five at-bats, while Chavez went 4-for-21 from the plate in 12 games.

The latter hit .276 last season with Seattle in 80 games after posting a .267 mark with the Mariners in 2013. Chavez, 37, also played 54 games with Seattle in 2009, but his season was cut short when he collided with SS Yuniesky Betancourt and sustained a serious right knee injury.

Saunders was competing for a job as a situational left-hander out of the bullpen, but he struggled, giving up nine runs on 12 hits and five walks in 6.1 innings.

LHP James Paxton (1-1, 2.57 ERA) makes his third and final Cactus League start Wednesday at 1:05 p.m. (Root Sports, MLB.TV) when the Mariners host the Chicago White Sox in Peoria. Paxton missed part of spring after tripping and bruising his forearm during a fielding drill but has rebounded nicely to build his innings count in time for the regular season.