Confirmed: The Mariners will begin the regular season with RHP Taijuan Walker in the starting rotation and LHP Tyler Olson in the bullpen. 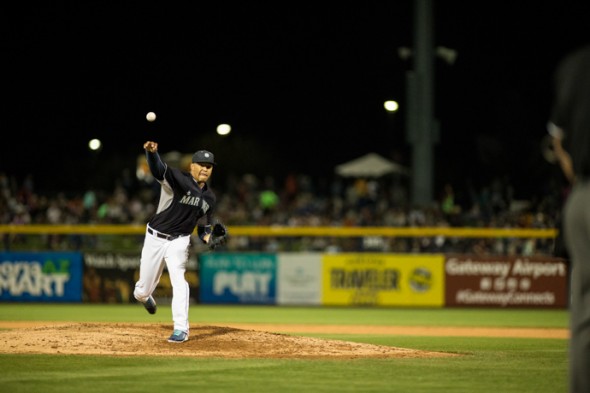 Manager Lloyd McClendon didn’t make an official announcement, but when reporters walked into his office Wednesday morning, he pointed to a white board with RHP Taijuan Walker listed as the fifth starter and LHP Tyler Olson on the list as the final member of the bullpen.

The news was reported by MLB.com, The News Tribune and The Seattle Times.

Walker has one spring start remaining, Saturday against the Rockies in Scottsdale, but he has nothing left to prove in the short term after beating out RHP Erasmo Ramirez and LHP Roenis Elias for the final rotation spot.

“I saw (it) all on a consistent basis,” McClendon said. “And I didn’t just see them in spring training. I saw them in September.”

Despite going 10-12 with a 3.85 ERA as a rookie last season, Elias will begin 2015 in Triple-A Tacoma. The club optioned the 26-year-old Cuban defector Sunday after he posted a 6.75 ERA in five spring appearances (four starts).

“Obviously it feels good,” Walker said. “But now it pretty much starts all over again. I’m still competing, because Elias is going to be down there waiting for his turn to come up the moment I slack off. I just have to make sure I stay focused.”

News came Tuesday night that Ramirez was traded to the Tampa Bay Rays in exchange for LHP Mike Montgomery, a former top prospect in the Royals organization. That allowed the Mariners to set their roster, though they have yet to confirm that Olson, 25, will begin the year with Seattle because he first needs to be added to the 40-man roster.

A non-roster invitee to camp, Olson began last season with Class A High Desert and finished the year with Double-A Jackson, combining for a 12-8 record with a 3.46 ERA in 27 starts.

“Nothing is, obviously, official,” Olson said. “But I think I’ve put myself in a good position. I’ve been going out there and showing that I can compete, be put in situations and get out of them.”

“He’s shown a lot of poise and the ability to get left-handers and right-handers out,” McClendon said. “He holds runners, works fast, throws strikes, fields his position. He’s done a great job. I’ve said every year I’m looking for surprises and he’s a surprise. Obviously we haven’t broke camp yet and he’s a non-roster guy, but he’s done a nice job.”

A day after ace RHP Felix Hernandez was shelled, LHP James Paxton was equally ineffective Wednesday in the Mariners’ 12-4 loss to the White Sox at Peoria Sports Complex.

Is McClendon’s  club actually ready for the regular season?

The Mariners have lost seven of their last eight to drop to 11-17-2 in Cactus League. They have Thursday off before playing exhibition games against the Rockies Friday at 7:05 p.m. in Peoria and Saturday at 12:05 p.m. in Scottsdale. To stay on his regular throwing schedule, RHP Hisashi Iwakuma will pitch Thursday at Peoria Sports Complex for Triple-A Tacoma against the El Paso Padres.

In Wednesday’s loss, Paxton (1-2, 7.84 ERA) looked like he could use another tune-up before the regular season begins. He allowed seven runs on 10 hits and a walk over 3.1 innings. He threw 83 pitches, 55 for strikes.

“All that matters is how you feel and if you’re ready to go for the season. A game like this happens in Seattle, then we’ve got a problem. But right now, I feel good about where I am.”

“It wasn’t a very good outing,” McClendon piled on after the Mariners were out-hit 22-10. “He threw a lot of pitches in a little amount of time. I was a little disappointed. We’ve got to get him ready.

“We certainly got the pitch count up,” he quipped. “That’s for sure.”