After Huskies coach Chris Petersen kicked him off the team in November, cornerback Marcus Peters is trying to convince the NFL he is mature enough for the next level. 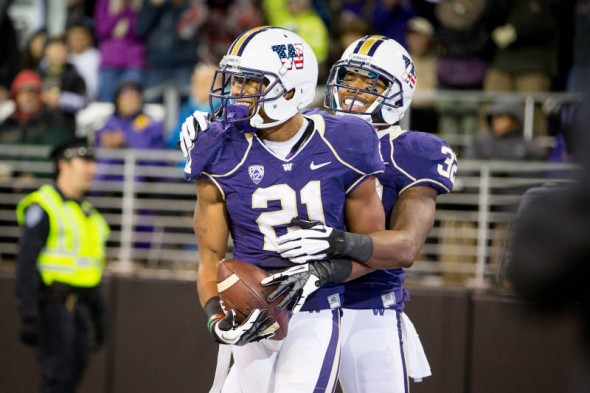 Former Washington  cornerback Marcus Peters is trying to rehabilitate his image in time for the 2015 NFL draft. / UW Athletics

Only a few minutes after he had wrapped up his workout Thursday, Marcus Peters made it clear he was in a hurry.

His interview with the media after the University of Washington’s pro day at Dempsey Indoor had to be quick, he told UW’s football sports information director. And it was. About two minutes. It was 10 questions before Peters hopped the guard rail and left the building.

The exit was about as abrupt as when he was dismissed from the football program in November for repeatedly clashing with coach Chris Petersen’s first-year staff.

But the cornerback has been busy of late. According to a report from CBSSsports.com’s Rob Rang, “no less than half the league has either worked Peters out privately or scheduled him for a visit.” He met with the New York Jets over dinner Wednesday night and planned to meet Thursday with the New Orleans Saints, who have the 13th pick in the NFL draft.

Peters is among the best cornerbacks in this class, a first-round talent but with character issues. In the 2014 season opener against Eastern Washington, he went on a sideline tirade, throwing his helmet and gloves, after being benched for committing a personal foul penalty. That earned him a one-game suspension.

A recruit of former coach Steve Sarkisian, he never got right with Petersen’s staff from that point. He was dismissed in early November after reportedly arguing with an assistant during practice.

But at six feet and 197 pounds, he is too talented for NFL teams to simply dismiss as the Huskies did. Fluid and lanky, the Oakland native played with an edge during his UW career, which in 2013 helped him earn second-team All-Pac-12 honors. At the time of his dismissal, he was by far the Huskies’ best defensive back, with a combined eight interceptions and 24 passes defensed over the past two seasons.

To gain back credibility, he went on a public relations mini-tour that gained steam in February thanks to an interview with USA Today.

So poor was Peters’ attitude, he admitted he would have kicked himself off the team if he were in Petersen’s position.

“I don’t blame (Petersen) for anything,” he said. “All I can blame is myself, because I made those decisions and I have to live with them. Now I’ll have to man up and I’ve got to answer these questions in interviews, and all I can do is sit there and answer truthfully and honestly.”

“Everything I went through I was meant to go through,” he added Thursday.

Peters was a big reason what was an estimated record number of scouts from all 32 NFL teams were at UW to watch the Huskies’ pro day. Seahawks coach Pete Carroll, general manager John Schneider and new defensive coordinator Kris Richard were in attendance, as was Redskins general manager Scot McCloughan and San Francisco 49ers GM Trent Baalke, among a host of others.

Another big reason: Linebackers Shaq Thompson and Hau’oli Kikaha and DT Danny Shelton went through position workouts, though Thompson was the only one to participate in combine drills after missing the bench press at the combine because of a thumb injury.

The quartetwas considered among the top 100 prospects, with Shelton likely to be among the first 10 picks.

Peters, who is expected to be picked in the first or second round, hasn’t lost the respect of his former teammates.

“It’s great to see him,” Shelton said. “It’s all a big family. It’s always good to see your long-lost cousin, somebody you haven’t seen in a while.”

“It felt good. One of our brothers came back today,” Thompson said. “He did a heckuva job out there. You can tell he’s been working out and is in shape. He looks like he’s ready for the next level.”

It’s true that Peters did little to dissuade that he isn’t NFL ready. Having already attended the combine, where he posted a 4.53-second 40-yard dash and a 37.5-inch vertical jump, he participated in positional drills and looked the part of an adept corner.

Afterward, he wasn’t willing to go into much detail about his rocky redshirt junior year. Or how it’s gone talking to NFL teams about his ill-timed departure.