Thiel: Lloyd likes his Mariners, again; why not?

Upon his hire, McClendon the Prophet foretold a golden era of Mariners success. He was tracking right last season. Looks like he’s going to go Nostradamus on the 2015 season. 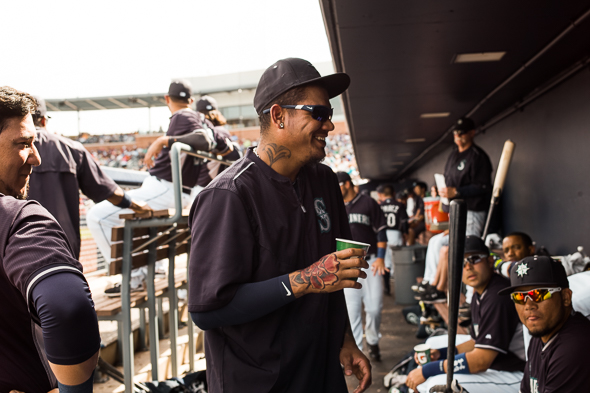 Why is this man smiling? Felix Hernandez knows something. / Drew McKenzie, Sportspress Northwest

Upon baseball’s Opening Day, a day filled with nearly as many empty promises as a national political convention, it is worth recalling a forecast by Lloyd McClendon upon his November 2013 introduction as Mariners manager.

He said his new team was about to enter “a golden era.” The skepticism his remark generated was so radioactive it had to be registered with the Nuclear Regulatory Commission. The man doomed himself before he pulled on the compass rose.

Then, early in the season, McClendon, answering a post-game question, said simply,  “I like my team.” Again . . . doomed, by all that was known to people of reason and sobriety.

But doom, it appears, has been doomed.

Turned out McClendon was way more right than wrong. The Mariners the past season committed a 16-game improvement to 87 wins that took slack-jawed fans to the fifth inning of the final game before the postseason was denied.

Now, the Mariners of 2015 are being forecasted by many pundits as a post-season entrant and by some as American League champions. Recently at spring training in Peoria, AZ.,  McClendon repeated what he said the previous April:

Say no more, Lloyd. Say no more. I’m on the bandwagon. It’s way too dusty walking behind it.

In a way that perhaps is less obvious. Especially when it comes to improvement of their nearly felonious offense from 2014.

The Mariners’ starting lineup in Monday’s 1:10 p.m. debut at Safeco Field against the Los Angeles Angels has no one under 24 and no one over 34. This is a big demographic deal — there are no rookies, nor are there past-prime veterans for whom mere ambulation is the feat of the day.

For too much of their history, the Mariners have relied on players on the low slopes of the Bell curve of age, rather than the high middle. As a result, the Mariners’ annual hopes rested more on luck rather than probability.

Or, as lamentable former general manager Bill Bavasi put it after one overtly dubious personnel transaction, “Maybe we’ll catch lightning in a bottle.” Or maybe he’ll be a smoldering cinder.

Obviously, age alone is not a factor in performance, but the talent connected to it is. To use a simple metric, the average batting average for MLB hitters the past season was .251, lowest since 1972. (Pitching has become so dominant that rules changes will have to made, or baseball becomes duller than televised poker. But that’s a subject for another day.)

The Mariners’ starting lineup has six guys whose career averages are at .251 or better. And the weakest among them a year ago, C Mike Zunino (.199), was easily the Mariners’ most improved hitter in spring (.352 BA, 7 homers, 14 RBI).

If we can presume players at or nearing their primes are less likely to fall off in one year, then the Mariners’ every-day starters in 2015 need to produce only at previous career norms to create a major league-average offense.

An average offense may not sound sexy, but coupled with the Mariners’ still-outstanding pitching (second in MLB in team ERA a year ago) and an above-average defense, the formula screams playoffs, and whispers for more.

On paper, in the irrepressible optimism of spring, it appears that the Mariners’ collection of younger home-grown talents have been coupled with two outstanding, expensive imports, Robinson Cano and Nelson Cruz, to be a team of a quality unseen here since the astonishers of 2001.

The fruition is why Felix Hernandez, to the disbelief of the entirety of baseball two years ago, signed a long-term contract extension to stay in Seattle. The $175 million in guaranteed money certainly helps, but he could have received that anywhere.

He said early on in spring training that the moment of vindication was upon him and his teammates.

“Our goal is to make the playoffs and win the whole thing,” said Hernandez, who starts the opener for the seventh consecutive season. “We’ve got the pieces now. So, no excuses.”

Not since the mid-1990s Kingdome teams of Ken Griffey Jr., Randy Johnson, Alex Rodriguez, Edgar Martinez and Jay Buhner have the Mariners been taken in the preseason so seriously by so many, including themselves.

Sure, baseball forecasts and $5 will get you an hour’s parking downtown. But it’s hard to find reason to dislike a team of younger vets and proven talents who have to do only what they’ve previously done to get Seattle to the playoffs for first time in 14 years.

McClendon said so. Nobody doubts the man who doomed doom.