Against the Los Angeles Angels in the season opener at Safeco Field, the Mariners were mid-season clinical — dominant pitching, timely offense, flawless defense. 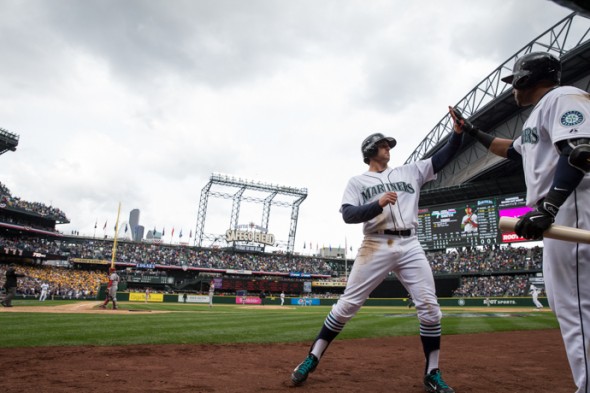 Brad Miller celebrates the final run in a 4-1 triumph over the Angels in the season opener Monday at Safeco Field. / Drew McKenzie, Sportspress Northwest

Perhaps taking a cue from the Seahawks, who are to swagger what Sinatra was to song, the Mariners’ Felix Hernandez dispensed with false humility. Asked how he felt he pitched Monday afternoon, he said, “What do you think? Great curveball, great changeup, excellent fastball.

Against the Los Angeles Angels, the Mariners’ morning-line rival for American League West supremacy, the Mariners were midseason clinical — dominant pitching, timely offense, flawless defense. The 4-1 win wasn’t a foregone conclusion, but it was forward motion for a Mariners team that hasn’t seen expectations this chubby in more than a decade. (Box score.)

Hernandez pitched a two-hitter with 10 strikeouts and got even with Angels superstar Mike Trout for a first-inning home run with two subsequent whiffs.

But really, what else was expected from Hernandez? He’s 6-0 (1.49 ERA) in eight career Opening Day starts.

Greater intrigue was elsewhere. Such as with the Smith boys. Seth Smith and Carson Smith had in common only their common name until Monday, when they answered the same question in the same game: You guys any good?

Seth, the 32-year-old right fielder acquired from San Diego for relief pitcher Brandon Maurer, had two doubles and a triple in three at-bats — the first in Mariners history to have three extra-base hits in an opener.

Carson, the 25-year-old rookie reliever who looked good in his first call-up in September, arrived in the eighth inning in the middle of a dire moment — one out, two on and facing the tying run in the person of Trout, best player in baseball by universal acclamation.

Smith, who was unexpectedly bounced down to the minors a week ago, only to be called up Friday, whiffed Trout on four pitches, and should have been three except for a debatable check-swing call.

Apparently, professional travail and pressure do not bother the tall Texan. He also whiffed Trout in September.

“I don’t have his number by any means,” said Smith the younger. “I’m not too sure I have an edge. I just try to attack.”

When he did attack and Trout went down, a rambunctious sellout of 45,909 rose as one, inspiring some emotion from the normally placid youngster.

“I got a little glove slap — probably my first one,” he said. “Not sure I need to do that ever again.”

It was Trout’s third consecutive checkout of the game, and he may have noted an excessive celebration. He may see Smith again in the series’ remaining games Tuesday and Wednesday.

“He came into a big situation and he executed his pitches,” he said. “The biggest thing was getting strike one, then strike two after that. After that, I like our odds.”

“(After not getting the checked-swing strike) he kept his composure. I think that says a lot when you keep your composure in those situations.”

Smith certainly had recent experience in managing his adrenal gland. After demotion to AAA Tacoma, the Mariners re-thought the decision after fellow reliever Dominic Leone faltered late in spring training. Leone was bumped Friday, and Smith was reached at his Peoria apartment after he returned from a minor-league game.

“It was a little bit of a shock,” he said. “I got home from a minor league game and got called into the office. It was 24 hours from departure. I wasn’t sure what to expect. But it was great, surprising news.”

Also a little bit surprising was where the Mariners offense was generated. A 1-for-12 day for the 3-4-5 hitters Robinson Cano, Nelson Cruz and Kyle Seager was countered by two hits each from Austin Jackson and Brad Miller, plus a rocket-launch homer by Dustin Ackley.

The competency from all parts of the lineup and pitching staff was for Mariners fans a gratifying glimpse of the promise of 2015.

As Hernandez and the Seahawks established, it’s not bragging if you can do it. 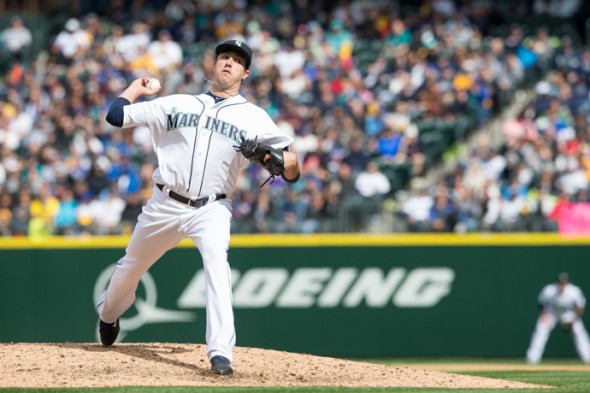