Smith: A remarkable batting feat right off the bat 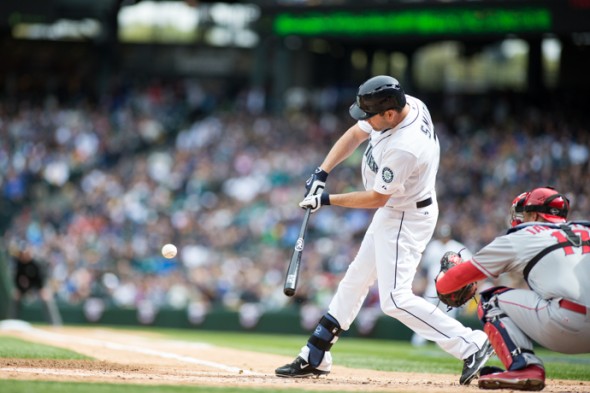 The Mariners have won nine consecutive Opening Day games (2007-current), the second-longest opening-game winning streak in major league history. Any way that’s diced, it’s an astounding record, one made possible, in part, by Seth Smith, acquired by Seattle over the winter in a trade with San Diego for RHP Brandon Maurer.

The Mariners sought out Smith, an eight-year veteran who once backed up quarterback Eli Manning at the University of Mississippi, to hit behind leadoff man Austin Jackson and ahead of No. 3 Robinson Cano.  The Seattle offense also imported MLB home run king Nelson Cruz from Baltimore to bat cleanup behind Cano.

In the first of 162 Monday, a 4-1, a Felix Hernandez-domination over the L.A. Angels at Safeco Field, Cruz went 0-for-4 and didn’t come close to a long ball. But Smith, 32, delivered  hits in his first three plate appearances — a double to deep center in the first, a triple to right in the third and a ground-rule double in the fifth.

Smith finished 3-for-3 with two RBIs and a run scored. He became the first in franchise history to collect three extra-base hits in an Opening Day game, remarkable considering the franchise has employed Ken Griffey Jr., Edgar Martinez, Alex Rodriguez and Ichiro, among others.

The last Mariner to record two such hits in his first two plate appearances on Opening Day was Richie Sexson in 2005.

Smith’s batting feat Monday was unusual in another respect. Not since April 1, 2013, had a major league player recorded three extra-base knocks on Opening Day. That afternoon, Gerardo Parra did it for Arizona, joining a short list.

Players who have done it in the past decade, listed chronologically:

Only six players in Mariners history have had as many as four extra-base hits in one game, topped by Mike Cameron’s four-home run extravaganza against the Chicago White Sox at Comiskey Park May 2, 2002.

LHP James Paxton will receive the start for the Mariners Tuesday in the second of three against the Angels, who will counter with LHP C.J. Wilson. Paxton went 6-4 with a 3.04 ERA in 13 starts last season and had a 1-2, 7.84 ERA in 10.1 spring innings this year. He will be making his fifth career start against the Angels (2-1, 2.59).