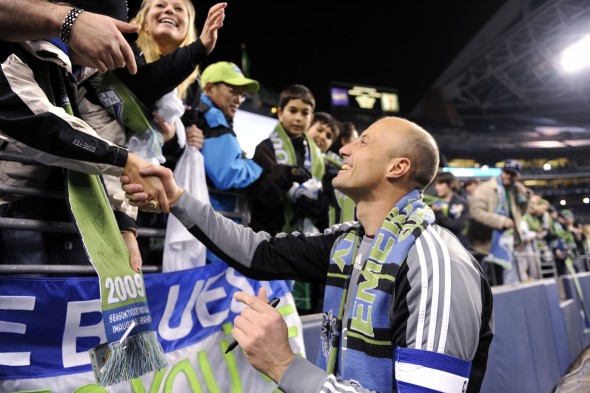 Kasey Keller, who closed out a 19-year international career with the Sounders in 2011, has been elected to the U.S. Soccer Hall of Fame. / Drew Sellers, Sportspress Northwest

Former U.S. Men’s National Team goalkeeper and four-time FIFA World Cup veteran Kasey Keller, who closed out a 19-year international career with the Seattle Sounders three seasons ago, has been elected to the National Soccer Hall of Fame along with Sounders head coach Sigi Schmid (builder) and the late Glenn “Mooch” Myernick (veteran).

“It’s a great honor,” Keller said. “You look at some of the guys that have been elected before; it’s not an easy process. It’s not like it’s an open-door policy. It’s cool to be voted in. I really saw it first-hand, when I was able to speak on (Brian) McBride’s behalf, of how cool it is.

Keller concluded his career with the Sounders from 2009-11, when he retired as defending MLS Goakeeper of the Year.

Schmid enters the HOF on the builder ballot after 35 years of collecting numerous championships at the collegiate and professional levels. He is the winningest coach in MLS history and, since 2009, has led the Sounders to four U.S. Open Cup titles and directed playoff teams every year.

“I would like to thank U.S. Soccer for this incredible honor, as this is certainly right up there with the top moments I’ve experienced in this sport,” said Schmid. “I am honored to be inducted alongside Kasey Keller, who is a Seattle soccer icon.”

Myernick, who died Oct. 5, 2005, will enter the Hall of Fame on the veteran ballot as a soccer pioneer who represented the U.S. at every level as a player, coach and contributor.