Of the three quarterbacks competing to become UW’s next starter, only fourth-year junior Jeff Lindquist has college game experience. 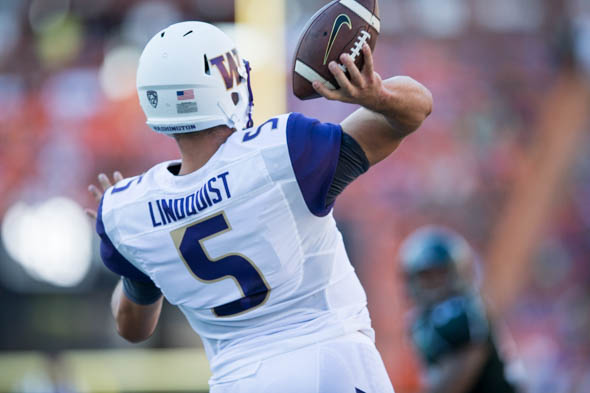 Jeff Lindquist didn’t have much of a season, but he’s the only QB with game experience at Washington. / Drew McKenzie, Sportspress Northwest

QB Jeff Lindquist has started one game since enrolling at the University of Washington. He has thrown one touchdown pass. Yet the fourth-year junior is the most experienced of the three scholarship quarterbacks seeking to become the Huskies’ starter next fall.

Sure, redshirt freshman K.J. Carta-Samuels was a standout last season . . . but on scout team. Yes, true freshman Jake Browning was setting passing records in 2014 . . . but in high school.

Both are realities working in Lindquist’s favor after the Mercer Island native played a limited role for the Huskies last fall. That one start came in the season opener, when he went 10 of 26 for 162 yards and a touchdown in a 17-16 win at Hawaii. Other than a 91-yard touchdown pass to WR John Ross in the first half, Lindquist labored. When incumbent Cyler Miles returned from a one-game suspension a few days later, the 6-foot-3, 244-pound former Mercer Island High star returned to the bench.

“(I feel) solid, but not too confident,” Lindquist said Wednesday at Husky Stadium after UW’s sixth spring practice. “Obviously, there’s still a lot of work to be done. I haven’t proven much of anything.”

He’ll get plenty of chances this spring because of recent attrition.

In mid-March, Miles announced he was taking a voluntary leave of absence from the program, citing personal reasons. He started 12 of 14 games last season but struggled so often that Petersen said the starting job was open following the Huskies’ surprising 30-22 loss to Oklahoma State Jan. 2 in the TicketCity Cactus Bowl.

Though he is still listed on the roster, Miles isn’t participating in spring practice. He was by no means guaranteed to retain his job even if he did.

QB depth took an initial blow in January when Troy Williams (one start in 2014), a former four-star recruit out of southern California, transferred to Santa Monica College, a junior college near his hometown.

During his only media availability thus far this spring, UW coach Chris Petersen unsurprisingly fell short of announcing his starter for the season opener Sept. 4 against Boise State. He also left the door open for Miles to return the program, but a report last month in The Seattle Times said the Centennial, CO., native wasn’t planning on returning, though he planned to keep his options open.

“We’re going to let these guys compete, and we told them, and we mean this sincerely – we do not have a depth chart at any positions,” Petersen said last week. “It is a seating chart, and I hope they move each practice.”

Deciphering the early order is a challenge. Lindquist played behind the No. 1 offensive line Wednesday during the 11-on-11 portion of practice, while Carta-Samuels took reps behind the No. 2 offensive line. All three appeared comfortable. The offense didn’t commit a turnover.

“I thought it was a good day for us,” Lindquist said. “Red zone’s always a little more intense for the offense. Turnovers are worth two for our running at the end, and we didn’t have to do any running today, so guys were pretty sharp and pretty focused, and we were pretty stoked we kind of ran the table today.”

During Wednesday’s 7-on-7 red zone drills, he threw a pair of gorgeous touchdown passes to WR Marvin Hall down the sideline. He also threw one to TE Joshua Perkins and WR Jaydon Mickens.

But at 6-2, he is generously listed at 205 pounds, and physically still looks like a high school senior after enrolling early in January following an incredible career at Folsom High School (CA). In 2014, he matched a national record with 91 touchdown passes and set a career one with 229 career scores over three years as a starter.

Both Carta-Samuels and Browning aren’t being made available to the media the spring, nor are other players that haven’t played in games.

Lindquist added he was impressed with the way Browning learned the offense after he played in a spread, uptempo-system at Folsom.

For now, naming next season’s starter will have to wait.

“There is a competition, but right now we’re focused on getting the team better and maybe the fall we’ll be more focused on who’s going to be the starter,” Lindquist said. “We’re just trying to make each other better because ultimately the goal for us is to go win Rose Bowls. Whoever is leading the show, so be it.”