The Mariners rallied twice and had a big throw and a big hit from SS Brad Miller to end a three-game losing skid Saturday in Oakland. 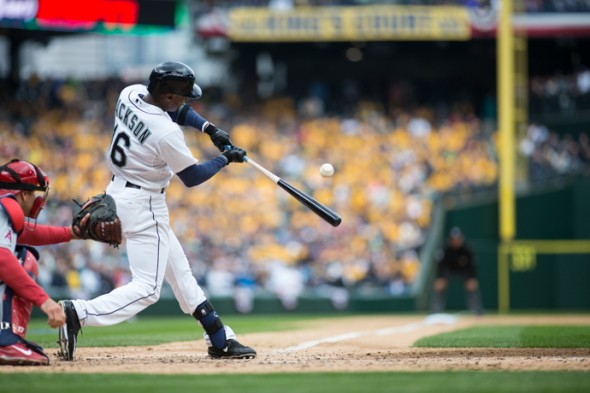 Staring at a fourth consecutive loss after blowing 1-0 and 4-2 leads, the Mariners (2-4) rallied for a 5-4, 11-inning victory over the Athletics Saturday in Oakland (box score) when SS Brad Miller doubled, driving in 1B Logan Morrison with the winning run.

In the Oakland 10th (4-4 tie), after Ben Zobrist singled, Ike Davis doubled to deep center. Miller took a relay from CF Austin Jackson and nailed Zobrist at the plate. In the 11th, Morrison singled to center and was sacrificed to second by LF Dustin Ackley. Miller followed with a double for the game-winning run.

Rookie reliever Tyler Olson of Gonzaga (two hits, two walks), who worked a scoreless 10th, had his first MLB win. Veteran newcomer J.A. Happ, making his first Seattle start, allowed two runs on seven hits over 6.1 innings and escaped a bases-loaded jam in the second. Happ retired 13 consecutive batters from the third through the sixth, but gave up four singles in the seventh. Fernando Rodney had a 1-2-3 11th inning for his second save.

“I thought our guys really rebounded today,” said manager Lloyd McClendon. “This shows the kind of fortitude this club has. This club really battled and came out ahead in the end.”

“I feel like every time we play them, it’s always a hard-fought game,” Miller said. “In the 11th, LoMo (Logan Morrison) started it off, Ackley did his job and I just got a pitch out over the plate and was able to stay on it.”

McClendon is no longer viewing Cruz as the club’s full-time designated hitter. Cruz started Saturday in right field for the third time in five games. While Cruz’s time in right field has been abetted by the injury to Seth Smith, McClendon said, “I just need to be smart where I put him out there and make sure he stays healthy throughout the year. So, I’ll use the DH spot to do that. But to say he’s our full-time DH, I never committed to that. And he’s not.” . . . Jesus Sucre got his first start behind the plate . . . Sidelined by a tight groin muscle since collecting three extra-base hits on Opening Day, Seth Smith returned to the lineup and went 2-for-3.