Russell Wilson threw out a another tease, this one on HBO — he really wants to find a way to play baseball AND football. How about if he reduced his pay for permission to play? 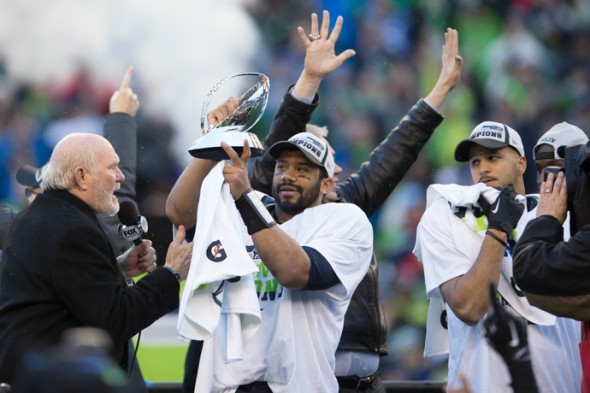 Russell Wilson isn’t ready to give up his day job, but a sideline gig as a second baseman is OK with him. / Drew McKenzie, Sportspress Northwest

Is Russell Wilson seeking to play two, or seeking leverage?

In an interview with HBO’s “Real Sports” airing April 21,  the Seahawks quarterback said again he has a desire to play pro baseball as well as pro football. Although there was little in his two-summer stint as a second baseman in the minor leagues to suggest he was a major league player, Wilson reiterating his desire now can be seen as a tactic in his effort to extend his Seahawks contract this spring.

“I never want to kill the dream of playing two sports,” Wilson said. “I would honestly play two sports.”

Host Bryant Gumbel pressed Wilson on what is preventing the 26-year-old from becoming the latest two-sport star.

“I don’t know,” Wilson said, shyly. “I may push the envelope a little bit one of these days.”

Wilson didn’t address specifically whether he would ask permission to play as part of his new deal with Seattle, but for the second year in a row, he attended spring training for a day with the Texas Rangers, who own his baseball rights. Wilson was drafted by the Baltimore Orioles out of high school and then in the fourth round by Colorado in 2010.

But he is sincere about baseball. His desire to play a partial season in the minor leagues instead of playing spring ball at NC State irked coach Tom O’Brien sufficiently that he told Wilson, who graduated in three years, he had to choose between spring ball and baseball. Wilson chose baseball, played a short season and transferred to Wisconsin for his final year of college.

Most famously, Bo Jackson played 694 MLB games as an outfielder over eight seasons from 1986-94, and played 38 games as a running back from 1987-90 with the Oakland Raiders, joining the NFL team in midseason.

The Seahawks are highly unlikely to accept a part-time quarterback, and it seems nearly as unlikely that an MLB team would give one of its 25 roster spots to a player with little experience just for April and May.

Wilson could offer to reduce his compensation in exchange for permission to go to spring training and compete for a minor league job. But all pro sports teams contractually prohibit nearly any kind of competitive or recreational sports in the off-season because the risk of injury is too high for such an investment.

Then again, if Wilson forgoes enough salary under the cap to allow the Seahawks to improve the roster, there may be a bit of temptation.

The temptation may also be sufficient for the 49ers to compensate privately the minor league pitcher who hits Wilson in the hand with a pitch. Then again, Jim Harbaugh no longer coaches the 49ers.