Sometimes mistaken for his former Huskies teammate, Danny Shelton, DT Elijah Qualls has an ambition to to be better than his All-Pac-12 mentor. 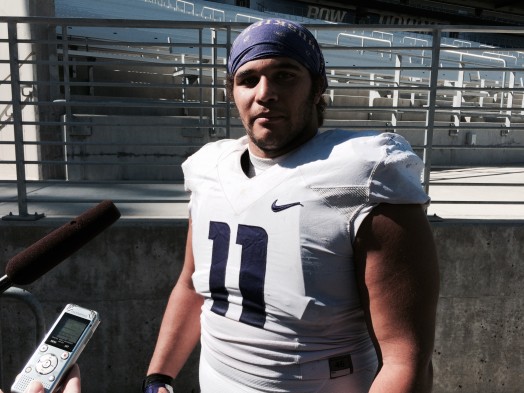 Third-year sophomore Elijah Qualls doesn’t want to be the next Danny Shelton. He thinks he can be better. / Adam Lewis, Sportspress Northwest

It will take some time before Elijah Qualls escapes Danny Shelton’s shadow. While Qualls was in Cabo San Lucas recently for spring break, someone he didn’t know yelled at him: “Hey Danny, you’re going in the first round!”

Such is the task Qualls faces as the heir apparent to Shelton, a 6-2, 339-pound defensive tackle expected to go in the first round of the NFL draft. At 305 pounds, Qualls, a third-year sophomore, doesn’t have Shelton’s gargantuan frame. Few do. That’s OK with him. He wants to develop his own identity after playing 14 games and totaling 13 tackles last season.

“I don’t want to be the next Danny Shelton, honestly,” Qualls said. “I want to be better. But I’m not expecting to do that right now. At least by myself.”

Qualls, a Petaluma, CA native, said he learned a lot by watching Shelton over the past two seasons. He considers himself a mobile defensive tackle that specializes stopping the run, but he’s working this off-season to improve in an area where Shelton excelled: Rushing the passer.

“Not to say I’m not in a competitive spirit, but I’m happy to say that I sat behind Danny Shelton last year,” Qualls said. “I learned a lot from him. It is not just technique and everything like that. But just how to mentally prepare and approach the game.

“I took in everything I possibly could from him. I was happy to sit behind somebody who was actually a first-round draft pick and get all that experience from him.”

The 6-1 Qualls, like Shelton, is mobile for his size. He might be just as versatile. At Casa Grande High School, Qualls played defensive tackle, center and running back. As a senior, he rushed for 708 yards and 10 touchdowns on 106 carries.

“He’s a guy that has a lot of short-area quickness,” said UW defensive line coach/special teams coordinator Jeff Choate. “He’s a really powerful guy that gives the offensive guys a lot of trouble because he’s so quick off the ball. He is strong. He’s done a nice job in the off-season of developing more power.”

Choate said he challenged Qualls to be more consistent. To play with an edge from the start of practice to the finish. According to Choate, Qualls embraced his role as a leader despite the fact he’s a sophomore in eligibility.

He’s having more fun, too.

“I’m actually enjoying this spring practice,” Qualls said. “A lot of spring practices in the past was just a lot of work. We’re grinding right now, but the other one was just more of straight grind . . .  it wasn’t like having fun, or actually paying attention to the game plan. But here, we’re having a lot of fun doing what we’re doing. Practices are going by really fast.”

The Huskies’ running back depth was bolstered Wednesday when Deontae Cooper participated in 2015 spring practice for the first time. Cooper, a sixth-year senior, missed the first nine sessions while tending to a family matter at his home in California.

Cooper’s UW career is known more for perseverance than stats. He enrolled for winter quarter in 2010 but had to redshirt that season after a left knee injury in fall camp. He sat out 2011 with another injury to the same knee. Then, in 2012, he seriously injured his right knee early in fall camp and subsequently missed the season. All three required surgery.

He figures to see some playing time. But fourth-year junior RB Dwayne Washington is probably the favorite to emerge as the starter after he rushed for more than 100 yards over the final three regular-season games in 2014.

In lieu of a traditional spring game, the Huskies will hold a Spring Preview and Fan Fest Saturday at Husky Stadium. Admission is free.

Festivities start at 9 a.m. on the East practice field, with entertainment for kids and interactive football activities. There will also be autograph and photograph opportunities, a station for fans to test their 40-yard dash, agility testing, a chance to practice tackling and passing and try on UW football gear.

Fans can watch UW hold a practice at noon in Husky Stadium.