Seahawks GM John Schneider admiires Russell Wilson’s ambitions, but doesn’t quite see yet how Wilson could make pro baseball work while being an NFL QB. 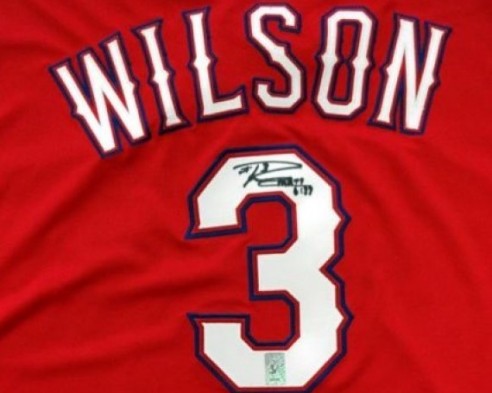 Saying he admired the way Russell Wilson “attacks everything — I don’t think you could put anything past him,” Seahawks general manager John Schneider sprinkled a bit of  cold water Wednesday on the idea that the quarterback was someday going to include pro baseball in his already fairly robust athletic life.

“I think one of the primary things that really attracted Russell to us – I know me in particular – was the confidence he has in himself and the goals, dreams, aspirations,” Schneider said on the Dori Monson Show on KIRO-FM radio Wednesday. “He’s off the charts in terms of his confidence level and the way he views himself, so it doesn’t surprise me that he would think that way.

“Quite frankly, I haven’t thought much about the baseball aspect of it. Based on the position that he plays in football, I think it would be difficult.”

Schneider was predictably careful in not slamming the door on Wilson’s longtime dream in the middle of complicated negotiations for an extension of his contract that could produce an annual salary or $20 million or more. Schneider avoided answering the question of including a prohibition on playing baseball in the proposed extension:

“That’s not something I’d get into right now,” he said.

Wilson raised the baseball option in an interview that will air on HBO’s “Real Sports” Tuesday. A promotional trailer was released Sunday in which Wilson told Bryant Gumbel, “I never want to kill the dream of playing two sports.”

Asked what’s stopping him from doing that, Wilson said with a chuckle: “I don’t know. I may push the envelope a little bit one of these days.”

Wilson was a minor league second baseman for parts of two summers in college, and his rights have been acquired by the Texas Rangers, with whom he has an appearance at spring training the past two years.

Pro Football talk reported Tuesday that contract talks had made little progress, but there is no immediate urgency; in fact, Wilson could play without an extension this season in the fourth and final year of his rookie contract.

Schneider cautioned against reading too much into the reports.

“What I can tell you is that this is the ultimate team sport, we have a track record of rewarding our players that we recognize as core players,” Schneider said. “We’re going into our sixth draft now – I can’t believe that; we’ve been here for a while now – but just that track record of being able to make those tough decisions.

“Every negotiation is unique in and of itself and this is no different. Ultimate team sport, he’s our quarterback, we’d love him to be our quarterback. But the thing is, we need to keep as many of these guys together as we possibly can.

“I say this all the time: We want to be a consistent championship-caliber football team, one that the community and the Northwest is extremely proud of every year and has high expectations and hopes for. We have to be able to protect ourselves as we go and make smart decisions in trying to keep this whole thing together as long as we possibly can.”