Pats get their champions’ visit to White House Thursday. When last seen, however, owner Robert Kraft was helping convict one of his highest-paid players on a murder charge. Awkward . . . 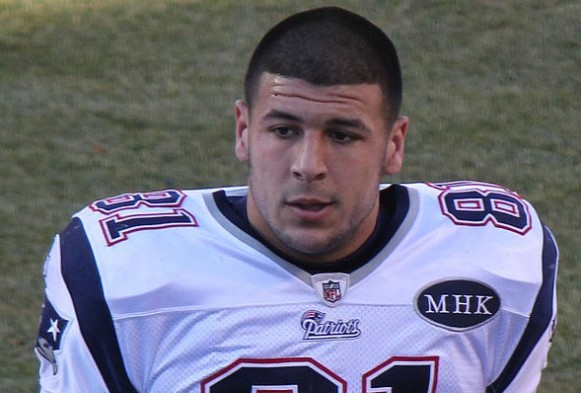 Aaron Hernandez was sentenced to life in prison. / Wiki Commons

The New England Patriots Thursday will succeed the Seattle Seahawks in one of the great modern traditions of U.S. pro sports: A champion’s visit with the president at the White House. Talk about clumsy timing.

For much of the sporting nation, the most recent exposure to the Pats was not the Super Bowl triumph over the Seahawks. It was watching the team’s owner, Robert Kraft, testifying last month in open court against one of his own star players. The testimony helped convict former tight end Aaron Hernandez of first-degree murder.

The Hernandez arrest, investigation, trial and conviction have been upon the national  consciousness since June 2013, long enough that many perhaps became inured to it. The topic was barely a ripple during Super Bowl week in Phoenix.

But if a step back is taken from the daily developments, the sight and sound of an NFL owner publicly helping convict of murder someone to whom he committed up to $40 million in compensation in 2012, was astonishing. I don’t recall its like in American sports history.

Kraft is one of the NFL’s patriarchal figures, and jurors told reporters later that Kraft’s description of how Hernandez lied to him was compelling.

As a moral matter, Kraft did the right thing — and the minimum thing, to bring a measure of justice to the family of the victim, Odin Lloyd. Kraft probably even picked up some pity points, coming off as the bewildered, grandfatherly victim of ghastly betrayal.

Nevertheless, it was Kraft’s organization, known under coach Bill Belichick for its meticulous scrutiny of potential hires, that brought Hernandez back to his home area in 2010, the youngest player in the NFL that year, after a University of Florida collegiate career bearing red flags.

Both the Pats organization and his college coach, Urban Meyer, now at Ohio State, have distanced themselves from insinuations that the football enterprises enabled Hernandez’s behavior.

Experts with an understanding of criminal behavior have suggested that Hernandez is a psychopath, a disorder with no known remedy, well beyond the reach of coaches, teammates and anyone with influence in his life.

David Hare, the undisputed, foremost expert on psychopathy, lists the following points as the traits of a psychopath on his checklist: superficial charm; manipulation; cunning; evidencing neither empathy nor guilt; lack of remorse; recklessness; thrill-seeking; pathological lying; grandiosity; and the complete inability to take responsibility for one’s actions.

That is a scary set of characteristics, with high capacity for deceit and misdirection that would fool many. Even more startling was that apparently no significant social radioactivity was detected in Hernandez during what is annually a three-month audition prior to each draft by every team.

He did fall from being labeled a first-round talent to a fourth-round selection by the Pats. But his play and behavior were good enough by August 2012 to get a five-year extension for up to $40 million, which included a $12.5 million signing bonus, the largest signing bonus ever given to an NFL tight end.

It would be easy to crack on Belichick and his personnel people for failing to see the signs. And someday we may learn that he ignored, marginalized or hid behaviors of Hernandez that were telltales of serious dysfunction (perhaps bu the time we learn the results of the NFL’s Deflategate investigation).

But until then, no Seahawks fans should feel comfortable knocking Belichick. Not with the whiff Pete Carroll made on Percy Harvin. You remember him — one of Hernandez’s teammates on Meyer’s Florida teams.

There’s no equating here Harvin’s misdeeds as a player with Hernandez’s murder conviction. As far as is known publicly, Harvin committed no crimes. But in the world of pro team sports, insubordination is a serious felony. That was a major reason the Seahawks took a self-wallop in October in jettisoning Harvin, for whom Carroll expended much franchise treasure, in exchange for some magic beans.

In hindsight, the shocking trade of Harvin grows wiser, because Carroll recognized Harvin’s divisiveness would create more consequences than mere embarrassment over owning up at midseason to a personnel failure.

Ironic, then, that Belichick and Carroll wound up meeting in the Super Bowl despite being bashed by mortifying flops in the aspect of the game that they do better than anyone else: Evaluating people and getting the most from them.

Belichick and Carroll learned again a brutal lesson that trips nearly all coaches, good and bad: They can’t fix everybody.

We’ll leave it to President Obama, who has some experience in diplomatic workarounds, to avoid as much awkwardness as possible Thursday.