Mariners bats pull a no-show in loss to Texas

For their return home Friday night against the Rangers, the Mariners chose a different form of futility — punchlessness — to extend their losing streak to four games. 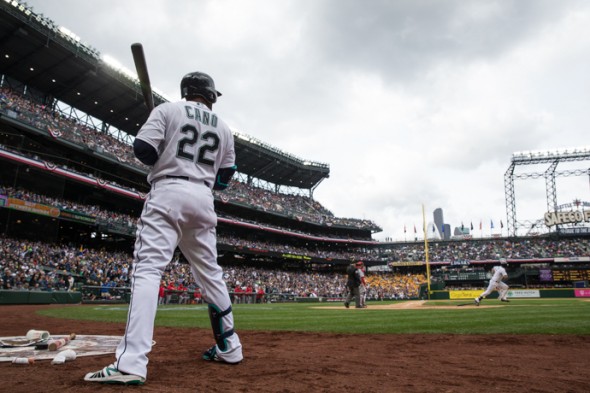 As if he heard the growing cacophony of disgruntled Mariners fans during Seattle’s recent 2-4 road trip, manager Lloyd McClendon during Friday afternoon’s pre-game press conference disclosed a message he told his players after their sluggish start to the 2015 season.

“To think that it’s going to be a fairytale season and everything’s going to be fine, and you’re not going to have three- or four-game losing streaks, come on,” McClendon said. “That’s ridiculous. And to think that the world’s coming to an end when you’re 3-6, that’s also ridiculous.”

When the Dodgers swept the Mariners out of Los Angeles, the culprits were sloppy defense, bad base running, struggling starting pitchers and a Fernando Rodney blown save.

Those weren’t the problems, in front of an announced crowd of 36,606.

In his second start of the season, LHP J.A. Happ (0-1, 2.70 ERA) allowed two runs over seven efficient innings. DH Prince Fielder nicked him for an RBI double in the first and C Robinson Chirinos added a solo home run in the fifth. Otherwise, the veteran did his part, allowing five hits, walking two and striking out three.

“Regardless of how we’re doing, my goal is to go deep in the game,” he said. “I feel good about getting through seven tonight.”

After 10 games, it is ridiculous, as McClendon said, to make sweeping evaluations. The Mariners were the only team in the majors to begin the year playing three teams that made the playoffs in 2014. Of their 10 games, nine have been decided by three runs or fewer, seven by two runs or fewer.

But the inability to score runs at home is something that dates back years. So is the propensity to get blanked by unheralded starting pitchers. They’ve scored just eight runs  in four games in Seattle.  They let RHP Yovani Gallardo (2-1) throw six shutout innings.

DH/RF Nelson Cruz went 3-for-4 Friday, the only Mariner to notch a multi-hit game. The best chance to score came after they loaded the bases with one out in the third inning. But OF Seth Smith hit into a double play.
To start the seventh, Cruz singled and 3B Kyle Seager followed with a a walk. But 1B Logan Morrison grounded into a force play, and LF Dustin Ackley and C Mike Zunino fanned.

“We had the opportunities,” McClendon said. “We just couldn’t get the big hit to get us over the hump. There will be better days. I think, offensively, we’re a much better club than we were last year. Right now, guys are trying to find their groove a little bit.

The offense didn’t manage a run until the bottom of the eighth, when Smith trimmed the Texas lead to 2-1 with a sacrifice fly. Later in the inning, Cruz came to the plate with Robinson Cano on first. He had singles in his first three at-bats. But his fourth ended when he hit a towering flyout to left field off Texas reliever Tanner Scheppers to end the inning.

“It was the pitch I was looking for,” Cruz lamented.

That ended his streak of five consecutive games with a home run, second-longest in club history.

So the Mariners are off to a poor start after being the trendy pick to make the playoffs for the first time since 2001.

“Like I told the guys the other day, and this is real important,” McClendon said pre-game. “Everybody’s giving the American League title and the pennant to the Seattle Mariners. We’re going to hoist the trophy, we’re going to the World Series, we’re going to win it. All that’s great.

“But in-between, there’s a lot of blood, sweat, tears, some heartaches, some adversity that you’ve got to go through, and you’ve got to be built for it. And you’ve got to handle it. And if you’re lucky, in the end you’ll be able to hoist that trophy.”

Reliever Tom Wilhelmsen (hyperextended right elbow) has yet to start playing catch but will likely resume throwing later this week or next week. . . SS Chris Taylor (15-day disabled list) is progressing well in Triple-A Tacoma after fracturing his right wrist during spring training. He entered Friday 5-for-19 in five games with the Rainiers . . . McClendon said he has “full confidence” that Rodney will bounce back after two poor outings — a blown save Tuesday against the Dodgers and a four-run ninth against the A’s Sunday — during Seattle’s 2-4 road trip.