Overcoming deficits of 7-2 and 10-5, the Mariners worked six walks from the Rangers in the final two innings, setting up Nelson Cruz for a walk-off single to take the series with an improbable 11-10 win. 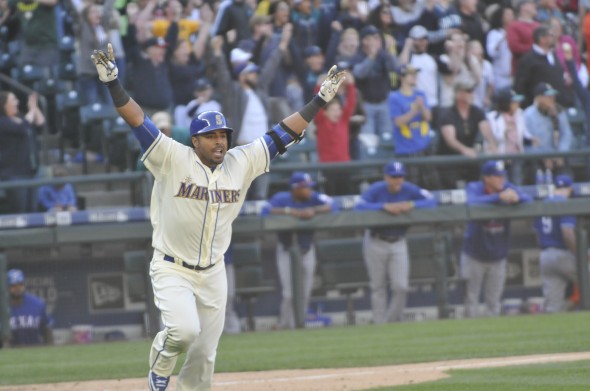 Lloyd McClendon said it again: “This team is built for greatness.”

Yet it took about 317 things in a row to go right Sunday afternoon for the Mariners to avoid meeting the American League West-leading (!) Houston Astros Monday with the AL’s worst record.

No disrespect to the Mariners manager, but I prefer, for the moment, to lean toward the explanation offered by SS Brad Miller.

“You never know,” he said. “Baseball is crazy.”

Exhibit A for Miller’s hypothesis was the the 11-10 win by the Mariners drawn across nearly four hours at Safeco Field as well as the battered souls of the Texas Rangers. Greatness was in limited supply, but grit was in abundance: One run in the seventh, three in the eighth and two in the ninth, capped by a bases-loaded single by RF Nelson Cruz, was evidence that, despite the 5-7 start, this lineup has some things going on.

Topping the list was a virtue that isn’t directly visible in the box score: Plate patience.

Helped by a sketchy Rangers bullpen, the Mariners overcame deficits of 7-2 and 10-5 by  drawing six walks off three relievers in the final two innings. That included two from Neftali Feliz, the formidable Rangers closer who had never given up a run to Seattle in 27 career innings over 22 games (12-for-12 in save chances).

“Very professional at-bats,” said McClendon of the final trips through the lineup. “I’ve said this before: This team is a gritty bunch. They’re built for this. Character-wise, they’re tough.

“I don’t know what’s going to happen. But I like where we are.”

He’d like the Mariners’ position even more if he could say the same about the two youngsters in the starting rotation, especially James Paxton, whose third-inning implosion Sunday was worth seven runs (two earned) to the Rangers.

Answering a question about his hitters, McClendon said, “We slow games down.” Asked what he thought of Paxton, McClendon neatly played off his previous response: “The ability to not slow things down.”

Paxton gave up nine hits in 2.2 innings — the shortest outing of his career — with one strikeout before rookie Tyler Olson came on to get the final out of the third inning.

“The pitching coach tried to get (Paxton) to slow down a little,” said McClendon of a mound visit after weak hits and a throwing error began the collapse. “That didn’t happen. He was throwing the ball pretty good. But he could just not slow things down.”

Paxton saw it a little differently.

“I’m getting too rotational — I need to go straight to the plate,” he said of his delivery. “I need to get in the bullpen and work on it. I’m struggling right now, but I’m going to figure it out. Just forget this one.”

Fortunately for him, the Mariners this season have some hitters who can help forget pitching pratfalls. Sunday was a premier example. Among the season-high 17 hits were three each by Cruz, Robinson Cano and Kyle Seager, the 3-4-5 hitters who accounted for 9 RBIs. That’s how it was drawn up in the off-season when the franchise bosses made an expensive run for free agent Cruz.

Cruz homered in the first and third innings, making for a major-league leading eight in eight games. Then he struck out three times, including when Feliz entered the game in the eighth, something Feliz had not done so early since 2009. But relievers Tyler Scheppers and Keone Kela (the latter a graduate of Chief Sealth HS in West Seattle) combined to walk four. That forced the hand of rookie manager Jeff Banister.

“I asked a lot of (Feliz),” he said. “I felt we needed our best at the time against the heart of their lineup. He was able to get out of it with the lead.”

Then came the ninth, which Miller, who came in as pinch-hitter for SS Willie Bloomquist, began with a sharp single to right. After an out, OF Seth Smith worked Feliz for a walk, holding firm on a 96 mph fastball on a 3-2 count.

Leadoff hitter CF Austin Jackson, who also had three hits and began the game with a homer, followed with an equally masterful AB that turned into a single, scoring Miller with the 10th run. After a second out, Feliz walked Cano intentionally to load the bases, opening the two-out drama for Cruz.

“I don’t think you can ask for anything better — we’re just happy to have our hottest hitter in that situation,” McClendon said. “You had to feel good about it, especially since their closer had thrown quite a few pitches.”

On his 49th pitch, Feliz went to a breaking ball in the middle of the plate. The single to left brought the few in the crowd of 31,601 who weren’t already standing to their feet, and the party commenced to celebrate a series triumph in a most improbable fashion.

“I struck out three times, but I feel like I should do more damage in that situation,” Cruz said. “It was s great win. We need this. We showed a lot of heart.”

There remains no metric for heart, so his word must be taken for it. Along with what the scoreboard says.