Coming off consecutive Super Bowl appearances, the Seahawks will play five prime-time games in 2015. For the first time since 2011 they will open with a pair on the road. 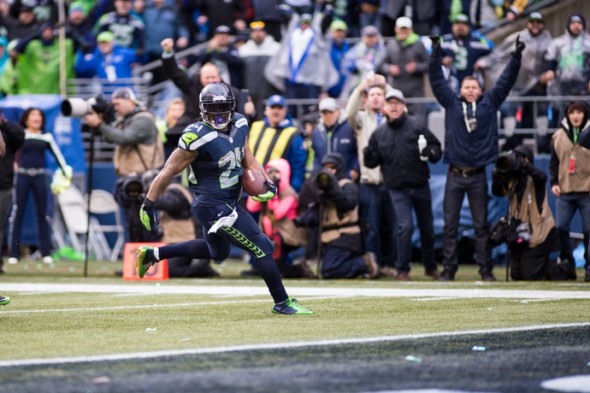 After signing a two-year extension with the Seahawks March 6, Marshawn Lynch will again be the focal point of Seattle’s offense. / Drew McKenzie, Sportspress Northwest

For the first time since 2011, and for the fifth time in franchise history, the Seahawks will play their first two regular-season games on the road in 2015, at St. Louis Sept. 13 and Green Bay Sept. 20. The latter is one of a franchise-record five prime-time games on the schedule, released by the NFL Tuesday. The Seahawks will also play nine against 2014 playoff teams, including two against clubs they met in the postseason en route to Super Bowl XLIX in Phoenix.

After opening against the Rams and Packers, the Seahawks play their first game at CenturyLink Field Sept. 27 against the Chicago Bears, a non-playoff team last year.

Big box office after consecutive Super Bowl appearances, the Seahawks will play three Sunday night games (Sept. 20 at Green Bay, Nov. 15 at Arizona, Dec. 13 at Baltimore), a Monday night contest (Oct. 5 vs. Detroit), and a Thursday night game (Oct. 22 at San Francisco). Seattle, 13-1 in prime time under head coach Pete Carroll, had four such games in both 2013 and 2014.

While the Seahawks, hoping to get back to the Super Bowl for the third year in a row, open with two on the road, they will play five of their final eight at the Clink.

One reason the Seahawks will open with back-to-back road contests: The Mariners play at Safeco Field on the NFL’s opening Sunday (Sept. 13) against Colorado and at home Monday, Sept. 14 against the Los Angeles Angels.

Green Bay (Week 2), Detroit (Week 4) and Dallas (Week 8), all playoff teams last year, present the major obstacles in the first half of the schedule. In the second half, Seattle will face four 2014 playoff teams.

Seattle has a more favorable bye, coming in Week 9, vs. last year in Week 4, forcing the Seahawks to play 13 consecutive weeks without a break. But . . . the Seahawks play three of four on the road leading into the bye.

Seattle also faces a more favorable travel schedule. Unlike 2013 and 2014, when the Seahawks had three games on the East Coast, the Seahawks have only one in 2015 — at Baltimore Dec. 13 — although three will start at 10 a.m. Pacific Time (see below).

Last year, Seattle didn’t play an NFC rival until Oct. 19 (St. Louis). This year, the Seahawks open with a division foe for the first time since 2012, when they faced the Arizona Cardinals in Week 1.

The Seahawks play consecutive road games three times and have their longest home stand of three games vs. Arizona, San Francisco and Pittsburgh from Nov. 15-29.

ST. LOUIS (Weeks 1 & 16): The Seahawks split a pair with the Rams in 2014, losing 28-26 under the Arch and winning 20-6 at the Clink. The Seahawks haven’t lost at home to St. Louis, 6-10 last season, since Jan. 8, 2005. The Rams were not very active in free agency – they signed OLB Akeem Ayers from New England – but made a major trade with Philadelphia, acquiring QB Nick Foles for banged-up veteran Matt Bradford. Four of the past six Seahawks-Rams games have been decided by less than a touchdown.

GREEN BAY (Week 2): After losing to Seattle in 2012 on the “Fail Mary” play and again last season by blowing a 19-7 lead with slightly more than two minutes to play in the NFC Championship game, Aaron Rodgers has to be aching to beat the Seahawks. As opposed to the last two meetings, this time a presumably healthy Rodgers will get the Seahawks where he wants them, at Lambeau Field, where the Seahawks have lost five in a row since their last win there Nov. 1, 1999 with Jon Kitna at quarterback. The Packers didn’t do a lot in free agency except what they always do – re-sign their own. This year, the key inkings were WR Randall Cobb and tackle Bryan Bulaga.

CHICAGO (Week 3): This will mark the first meeting between the Seahawks and Bears since then-rookie Russell Wilson in 2012 orchestrated successful scoring drives of 97 and 80 yards at the end of regulation and in overtime for a 23-17 victory. After a disappointing (5-11) in 2014, the Bears executed a major re-boot by bringing in new GM Ryan Pace, head coach John Fox (from Denver), and trading WR Brandon Marshall to the Jets. The Bears signed 10 players in free agency to bolster the depth chart, including WR Eddie Royal. The Seahawks will be seeking their third consecutive win over Chicago.

DETROIT (Week 4): The Seahawks haven’t seen the Lions since Oct. 28, 2012, when Detroit recorded a 28-24 victory at Ford Field as Matthew Stafford threw for 352 yards and three touchdowns. This will mark Seattle’s first look at former Seahawk Golden Tate (99 catches, 1,331 yards, eight TDs last year) in a Detroit uniform. The Lions, 11-5 in 2014 before a first-round playoff ouster by Dallas, suffered one of the biggest losses in free agency when All-Pro Ndamukong Suh bolted for Miami, but also made one of the best off-season deals by acquiring five-time All-Pro Haloti Ngata from Baltimore to replace him.

CINCINNATI (Week 5): This will be first meeting since Oct. 30, 2011, when the Bengals defeated the Seahawks 34-12 at the Clink in a game in which Andy Dalton threw a pair of TD passés. The Bengals have reached the postseason four consecutive seasons, but have lost in the wild card round each time, including a 26-10 loss to the Indianapolis Colts last January. Cincinnati was not especially active in free agency, although they added linebacker A.J. Hawk from Green Bay for depth and re-signed G Clint Boling and LB Rey Maualuga.

CAROLINA (Week 6): The Seahawks have won five consecutive games from the Panthers, including four with Cam Newton playing quarterback. The teams met in the divisional playoffs last January, Seattle winning 31-17 as Wilson threw three touchdowns. Carolina, 7-8-1 last year in the feeble NFC South, didn’t do much in free agency other than signing Michael Oher to play tackle.

DALLAS  (Week 8): Dallas, 12-4 last year before losing to Green Bay in the divisional playoffs, knocked off Seattle at the Clink last year when the Seahawks couldn’t prevent the Cowboys from converting a 3rd-and-20 in the fourth quarter. The Seahawks have lost four of their last five to Dallas and are without a win in the Big D since 2002. The Cowboys franchised WR Dez Bryant and lost RB DeMarco Murray to Philadelphia in free agency. But they signed RB Darren McFadden, formerly of Oakland, to a two-year deal, probably a steal if he can stay healthy.

ARIZONA (Weeks 10 & 17): Starting 9-1, the Cardinals controlled the NFC West much of last season before dropping three of their final six as a prelude to a first-round playoff ouster at Carolina. The Seahawks administered two of those losses, 19-3 in Phoenix and 35-6 at CenturyLink, but never had to face starting QB Carson Palmer, shelved with an ACL tear. The Cardinals lost DT Darnell Dockett (49ers) and Dan Williams (Raiders) in free agency, departures that should be offset by the additions of G Mike Iupati (49ers), DT Corey Peterson (Falcons) and DE Cory Redding (Colts).

PITTSBURGH (Week 12): The Seahawks have had three cracks at beating Ben Roethlisberger, including in the 2006 Super Bowl, and are 0-3. This will mark the first meeting between the teams since Sept. 18, 2011, when Pittsburgh prevailed 24-0 following a 21-0 win in 2007. The Steelers went 11-5 last year before losing in the wild card round to Baltimore. As usual, the Steelers did little in free agency. Their only move of consequence was signing RB DeAngelo Williams to back up Le’Veon Bell.

MINNESOTA (Week 13): The Seahawks have won both games against Minnesota in the Russell Wilson era, 35-20 in 2012 and 41-20 in 2013. The Vikings went 7-9 last year and haven’t appeared in the postseason since 2012. The Vikings didn’t sign any free agents of note, but traded with Miami for WR Mike Wallace. Still to be resolved: the Adrian Peterson situation. The Seahawks haven’t won in Minnesota since 2004.

BALTIMORE (Week 14): The Seahawks have not faced the Ravens since Nov. 13, 2011, when they won 22-17 at CenturyLink Field, holding Joe Flacco to 255 yards and a touchdown. Baltimore is coming off a 10-6 year, which included a 35-31 loss to eventual Super Bowl champion New England in the divisional playoffs. The Ravens retained RB Justin Forsett, a former Seahawk, in free agency, after he rushed for 1,266 yards and eight TDs, but they lost three key players in DT Haloti Ngata (Lions), receiver Torrey Smith (49ers) and outside rusher Pernell McPhee (Bears).

CLEVELAND (Week 15): The Seahawks haven’t faced the Browns since Oct. 23, 2011, when Cleveland eked out a 6-3 home victory. The Browns went 7-9 last year and have not had a winning season since 2007 or a playoff appearance since 2002. The Seahawks might get their first look at the over-hyped Johnny Manziel. The Browns signed Josh McCown to be their quarterback in 2015.