LHP Tyler Olson, a Spokane native who starred at Gonzaga, won over manager Lloyd McClendon in spring training by not allowing an earned run in 10 appearances. 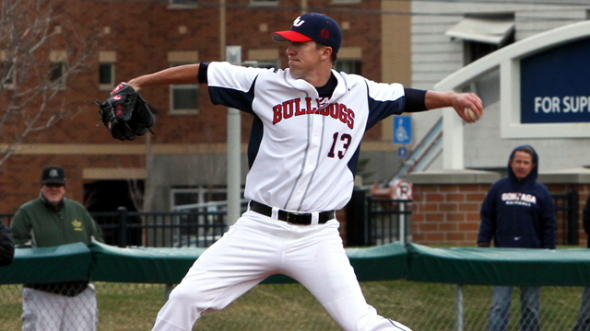 LHP Tyler Olson has impressed the Mariners’ brass with a fearless mentality in his first major league season. / Gonzaga athletics

Through 15 games, manager Lloyd McClendon has few reasons to be encouraged about the Mariners’ pitching staff — an expected strength — that entered Thursday’s off-day with a 4.83 ERA that ranked 14th in the American League and 28th in baseball.

Reliever Tyler Olson, however, is a glimmer of light.

A non-roster invitee to spring training, the rookie left-hander won a spot in the bullpen during Cactus League by allowing zero earned runs (three unearned) over 10 games and 12.2 innings, striking out 15.

“I didn’t know much about him,” McClendon said. “Other than what our scouts had told us going into spring training.”

Olson, 25, is more than a situational lefty that enters to face a single batter. While starters struggled to work deep into games, he showed during his last two appearances that he can be a long reliever, if needed.

In Sunday’s come-from-behind, 11-10 win over the Texas Rangers, Olson, a Spokane native who attended University High School, was charged his first runs of the season (three), but saved Seattle’s bullpen by going a season-high 2.2 innings after LHP James Paxton failed to make it out of the third.

In Seattle’s 5-2 loss to the Dodgers April 15, he allowed three hits and two walks but didn’t allow a run in two scoreless frames.

“The thing is, we don’t really have designated roles,” Olson said Tuesday. “Which I personally like, because it keeps you ready for every situation — whether it’s coming in to get a lefty out or coming in to throw two innings. It keeps our bullpen ready for any situation so if you’re thrown into it — like my last outing when I had to go three innings — you’re not really surprised by it.”

Olson doesn’t overpower hitters. His fastball resides in the low 90s. But his approach has helped him win over McClendon.

Olson’s move to reliever has yet to include mishaps. Though he would certainly benefit from lowering his 2.29 WHIP (walks-plus-hits per innings pitched) through six appearances.

“He’s shown a lot of courage since he’s been here,” said pitching coach Rick Waits, who first watched Olson pitch for short-season Everett after he was selected in the seventh round of the 2013 MLB draft. “That’s what you look for out of a pitcher. He doesn’t seem to be afraid of anyone or intimidated by anyone. I think he respects the great hitters of the game, obviously, but he goes out there and he goes right after them.

“He’s not messing around.”

Olson carried a similar no-nonsense reputation during his five-year career at Gonzaga. After the Oakland Athletics selected him in the 17th round of the 2012 draft, instead of going pro, he opted to return for his redshirt senior year, citing a desire to help the Bulldogs make the postseason. He then spent that summer working as a campus groundskeeper.

As a fifth-year senior, he went 9-4 with a 2.48 ERA and won West Coast Conference Pitcher of the Year.

The long college career probably helped Olson’s quick rise to the big leagues. He spent two seasons in the minors and skipped the typical mandatory stint in Triple-A that most pitchers undergo.

“It’s crazy,” Olson admitted of bypassing the Rainiers. “The opportunity itself is amazing. There was a jump, but, at the same time, when you’re out there on the mound, it’s the same thing. You got to make pitches. You can’t make mistakes, or they’re going to get hit. So being a little more consistent around the strike zone is something that I’ve had to be. It’s been working out so far.”

It couldn’t have started better.

In his major league debut April 7, Olson got Erick Aybar to ground into a 5-4-3 double play on the first pitch he threw. It ended the top of the ninth, and it helped Olson make history. He became the first pitcher in at least 28 years to induce two outs on the first pitch of a career. In reality, it could be longer, because the league started tracking pitches in 1988.

“It was quick. It was really quick,” he said. “I wish it could have been a little bit longer but at the same time, I’m glad it was a strike.”