To give the Seahawks the best chance to mitigate the travail in Glandaie, it makes sense to play out the final year of Russell Wilson’s contract. Risks abound, but NFL parity is pulling hard. 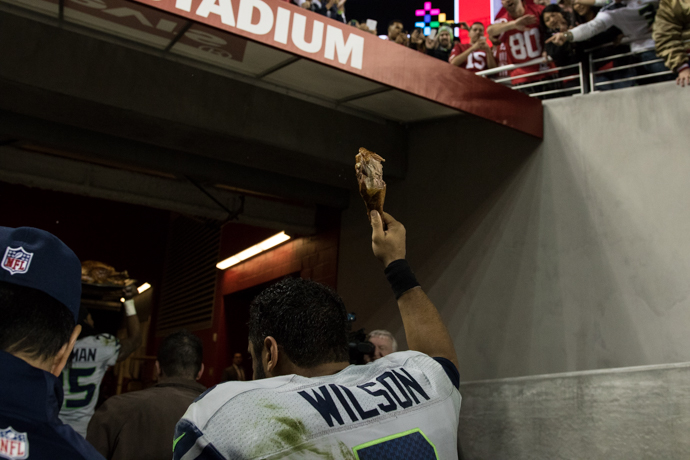 Russell Wilson might be willing to wait a year before he eats like a king. / Drew McKenzie, Sportspress Northwest

The Seahawks are upon their biggest test yet: The gravitational pull of NFL parity. For three seasons, they have been at or near the top, but the system is made to to pull back  elite teams to the black hole of the NFL’s mediocre middle. Resistance may not be futile, but the pull to the center is remorseless.

Rivals have been waiting for this moment: The Seahawks finally are on the edge of losing the advantage of having a Super Bowl-winning quarterback on the cheap.

The bargain of Russell Wilson’s third-round rookie contract meant the Seahawks could invest large coin on the rest of the roster. That’s primarily how they could afford to get and keep quality players on what has become one of the greatest defenses in NFL history.

But since the Super Bowl defeat, they have invested for 2015 $8.5 million in RB Marshawn Lynch instead of $5 million, and $8 million in TE Jimmy Graham instead of $4 million for Zach Miller. There have been many other comings-and-goings under the salary cap, but those increases for veteran players suggest an urgency to fulfill expectations that the offense is going to have to carry more of the seasonal load as the defense gets compromised with injury and age.

The Seahawks have an NFL-high 11 picks in the draft starting Thursday, none of which is in the first round, which the Seahawks avoid as if it were an Ebola cocktail.

Carpenter left in free agency in March after the Seahawks a year earlier declined their contract option. They have a similar option coming with Irvin for 2016, which is worth $7 million, so the chances seem reasonable that the option won’t be picked up.

The two first-rounders who met expectations for this regime were the 2010 picks, LT Russell Okung and FS Earl Thomas. The year before that, under the previous stewardship of the lamentable Tim Ruskell, was pass-rushing DE Aaron Curry, the can’t-miss pick at No. 4. Sporting News this week had the Curry selection as No. 8 on its list of the 15 most overpaid NFL draft picks. Over four years with the Seahawks and Raiders, he made $31 million and had 5½ sacks.

Sitting out the first round, Schneider figures, is better — and cheaper — than bombing out. So don’t expect the Seahawks to trade up into the first round, not after they have earned black belts in the martial art of low-round/no-round drafting.

Schneider likely cannot be prouder of the fact that the four wideouts who caught passes in the Super Bowl  (Doug Baldwin, Jermaine Kearse, Chris Matthews and Ricardo Lockette) were undrafted free agents.

But the season’s final pass is one of which he cannot be less proud, and brings us back to Wilson’s immediate future.

The fact that Wilson’s final pass, to Lockette, turned into the most significant play in Super Bowl history, as well as an unforgettable Seattle sports disaster for eternity, now plays a role in the apparent slow going in negotiations to extend Wilson’s contract. If the pass had been completed for the game-winning touchdown, the talk in April would be about how the Seahawks maintain an edge after consecutive Super Bowl triumphs.

A fine problem to have, certainly. But since that was denied, there is little doubt that players and coaches have boxcars full of intensity to get back to where they were, plus one yard.

I asked Schneider Wednesday what stuck with him, after some time had passed, about Carroll’s plan to navigate beyond the travail in Glendale to a third consecutive Super Bowl appearance.

“What stuck in my mind regarding Pete was the maturity of it, the understanding of what happened and how to put that in a specific spot and move forward — to use it as motivation,” Schneider said. “Every year as we start, there are going to be different challenges. Last year there was winning the Super Bowl (again) and best defense ever, and the challenges of dynasty.

“Those (were) big challenges to overcome. So now this challenge this year is being able to overcome what happened and go from there and look toward Super Bowl 50.’’

It strikes me that the best way for the Seahawks to meet that challenge is to let Wilson play into the fourth and final year of his rookie contract, at $1.5 million, and use the freed-up cash to pay other players who give the Seahawks the best chance to win in 2015.

The Indianapolis Colts did that with their star QB, Andrew Luck, and followed up on April 9 by picking up his fifth-year option, which will guarantee him a $16.1 million salary in 2016.

Delaying the start of Wilson’s second contract has its risks. For the Seahawks, it may send the wrong message to some longer-term players. And if the club doesn’t start paying him big now, they will have to pay him more later, particularly if the franchise tag is used in subsequent years.

For Wilson, the risk is he could have a career-damaging injury in 2015.

With stakes this high, so are the risks. But the reward is to increase significantly the chance to return to the Super Bowl to find the extra yard. Nothing can never erase what happened in Glendale, but two wins in three Super Bowl appearances certainly mitigates it for the career legacies of all parties.

The strategy of playing out Wilson’s contract goes against the grain of Schneider’s strong preference in maintaining competitive excellence by planning two, three and four years ahead.

But he’s straining against the formidable gravitational force of NFL parity, and one play changed everything. He may have to change too.