Jeff Lindquist is returning from the margins of Huskies football, flashing some accuracy and smart decisions Saturday to take the lead in the 3-way contest for the starting QB job. 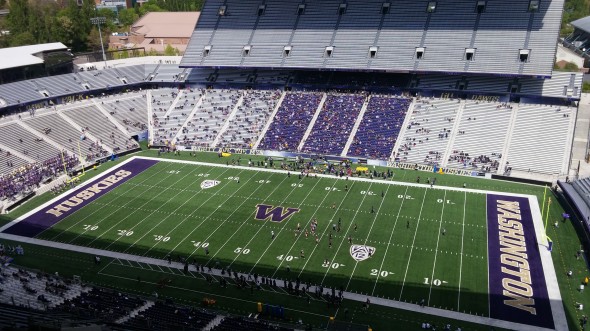 The ticket price was compelling — free — but the crowd for Washington’s spring preview fell a little short of the 99,000 that attended the University of Michigan’s spring game earlier this week. / Art Thiel, Sportspress Northwest

I write that with the same conviction that others accorded the presumption of James Paxton and Taijuan Walker as starting pitchers out of Mariners spring training.

What can be fairly deduced from a single afternoon at Husky Stadium of deeds and not words – as with all coaches, Chris Petersen won’t call a winner at the quarter pole – is that Lindquist, a bit of a lunk as a sophomore, has his smooth on as a junior.

Pedigree is with his two younger rivals from California, true freshman Jake Browning and redshirt freshman K.J. Carta-Samuels, but but experience and command is with Lindquist, which he seems to relish.

“I took the Papa Bear role with the young guys,” he said, grinning. He even called Browning, who graduated early from his high school in Sacramento to  enroll at UW in January, “Mr. Protégé.”

If we can take from that inference that Lindquist thinks he’s grooming his eventual successor, we can also take from his 13-for-16, 237-yard, two-TD performance in the controlled scrimmage that succession is unlikely to begin this September.

Petersen at least acknowledged the obvious.

Although it is little remembered, Lindquist, a 6-3, 244-pounder who is as solid as any linebacker, started the 2014 season opener in Hawaii. But he was a stand-in for Cyler Miles, the presumptive incumbent who missed all of spring ball and the opener to finish a suspension for his role in altercations during post-Super Bowl celebrations.

Once again, Lindquist is filling in for senior-to-be Miles, who, according to a statement last month from Petersen, is taking spring off from football to deal with undisclosed personal issues.

Asked about Miles’ status Saturday, Petersen indicated nothing has changed.

“Still the status quo,” Petersen said.  “We talk now and then. I said from the start, we gotta go with who’s here.”

Asked whether Miles still had the desire to play, Petersen said,  “The conversations are between Cyler and us. That’s the important thing now.”

In 2014, the lost time and the awkwardness of the team leader acting like a knucklehead damaged Miles’ chances to win over the new coaches as well as holdover teammates and fans. His ungainly throwing motion and dubious pass/run decision-making didn’t help, either.

He had some splendid moments, but not enough to help Washington beat a ranked opponent, its 8-6 mark something of a disappointment in Petersen’s first year after succeeding Steve Sarkisian and his final 9-4, bowl-winning season season.

Lindquist, meanwhile, fell into a limited role as a sort of a gadget guy, a Wildcat-formation operative whose cameos produced 10 completions in 30 attempts for 162 yards. He also ran 16 times for 63 yards, a skill that seemed his forte as QB.

But on a sun-spattered afternoon, Lindquist’s improved delivery and decisions constituted the day’s bright spot. Everyone always knew he had a cannon, which he demonstrated during a break in practice when students are invited to the field to do simple drills and win prizes. In the long toss, he showed up as the ringer and threw for about 61 yards, nearly doubling the student weenie-arms.

But this spring he showed something other than a fastball.

“Sometimes I felt like he didn’t have to anticipate because he could throw it late,” said offensive coordinator Jonathan Smith. “I think he’s throwing the ball with some anticipation and some touch.”

Noteworthy was one beauty, a roll-out scramble to his right from 37 yards out. He floated the ball to the near corner of the end zone where WR Jaydon Mickens leaped between two defenders for the over-the-shoulder catch while getting one foot down in play.

Asked if it was a 50-50 ball, Lindquist said, “I think I threw it a little better than that but he made a great catch. Props to that guy.”

Lindquist also hooked up with Dante Pettis for the day’s longest play, a 71-yard TD pass that was mostly biceps, not feet.

Browning completed 11 of 18 passes for 59 yards and had two picks, and Carta-Samuels was 11 of 12 for 123 yards and a pick. The numbers were relatively meaningless because of play against second- and third-unit defenses, as well as the thinness of the O-line, which has several starters out with injuries. But it was plain that Lindquist not only knew more about what he was doing, he did it much better than a year ago.

“The big thing for me was accuracy – I’ve done a lot better this spring,” Lindquist said. “Understanding the offense is part of growing as a quarterback. That piece has been a lot better for me. Getting comfortable with the guys you’re throwing to is a big piece, too.

Lindquist is unlikely to make any Huskies fan forget Marques Tuiasosopo, But it would appear he’s doing enough at the moment to make some forget sophomore Lindquist.

John Ross III, who averaged 21.8 yards on 17 receptions but ended up in the secondary at the end of the past season because of a manpower shortage, had knee surgery in January to repair two meniscus tears and was held out of spring ball.

But Petersen was evasive when asked whether the versatile speedster would be ready for fall.

“John Ross is not OK right now, or he’d be practicing,” he said, claiming that the determination awaits a medical report from doctors “giving us a final final.”