With 21 entering Tuesday’s game in Texas, Nelson Cruz is one of only four players in franchise history to produce 20 or more RBIs in a season’s first 20 games. 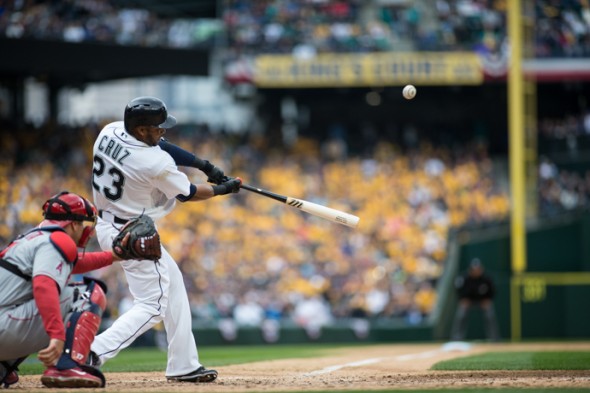 Given that the Mariners have three games remaining this month, starting Tuesday night with the second of three at Texas, it’s unlikely Nelson Cruz will eclipse Ken Griffey’s April franchise records of 13 home runs and 30 RBIs in 1997 when Griffey earned his only Most Valuable Player award. But Cruz, who can play a maximum of 22 games this month vs. Griffey’s 26 in 1997, is giving it an excellent shot.

With a run-scoring single in the first inning Monday night (the Mariners were 1-for-25 with runners in scoring position over four games before the Cruz single), Cruz increased his MLB-leading RBI total to 21 in 19 games. That makes Cruz one of the four most prolific run producers in the first 20 games of any season in franchise history.

Griffey’s 30 RBIs were three shy of the franchise record for any month. Both Edgar Martinez and Mike Blowers had 33 RBIs in August, 1995, when the Mariners launched their comeback from a 13-game deficit in the AL West. They completed the comeback in September in part due to Buhner matching the Martinez-Blowers record with 33 RBIs.