The Seahawks don’t have a No. 1 for the third year in a row (traded to New Orleans for TE Jimmy Graham), but they have a league-high 11 picks starting at No. 63 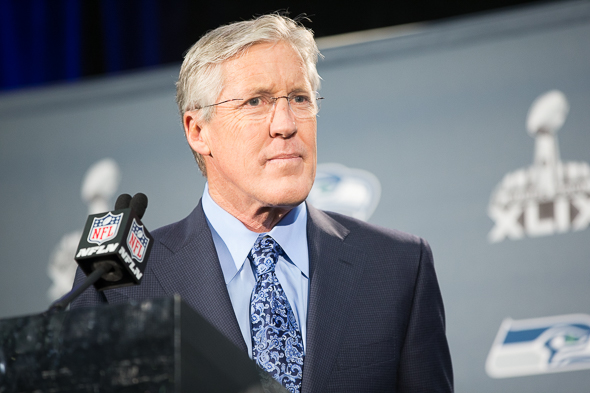 When the Seahawks – barring an unlikely trade up – make the 63rd overall choice (second round) in Friday’s NFL draft, it will mark the lowest “first” pick in franchise history (Christine Michael No. 62 overall in 2013). Seattle is without a first-round choice for the third consecutive year, having dealt their latest No. 1 March 10 to New Orleans for TE Jimmy Graham.

But with four compensatory picks banked due to the loss of unrestricted free agents following Super Bowl XLVIII, the Seahawks will have a league-high 11 choices spanning Friday and Saturday. In addition to the 63rd overall pick in the second round, Seattle will select 95th overall in the third. After that, the Seahawks own three fourth-round choices, two fifth-and three sixth-rounders and a seventh-rounder.

The Schneider-Carroll genius for mining mid-to-late round gems extends well beyond the draft, as the starting lineups for Super Bowl XLIX demonstrate.

Fourteen of the 24 players (punter and kicker included) who started against the New England Patriots came from the draft, including seven from rounds 3 through 7. Another five were undrafted free agents and four joined the Seahawks as unrestricted free agents.

That leaves RB Marshawn Lynch, acquired in 2010 for a 2011 fourth-round pick and what became a 2012 fifth-round choice. Schneider and Carroll got one of the greatest rushers of his generation with mid-round picks and the Bills will never live that down.

These were Seattle’s starters in February’s Super Bowl an how they were acquired:

All teams score with undrafted free agents –New England signed Super Bowl hero Malcolm Butler out of West Alabama after no team drafted him — but the Seahawks do better than most at both identifying late-round pearls they can coach up, or players ignored entirely in the draft.

Specifically, 12 of Seattle’s 24 Super Bowl starters came to the club in draft rounds 3 through 7 or via the undrafted route — 50 percent of the opening lineup. New England’s roster, featuring 11 No. 1 or No. 2 picks to Seattle’ seven, featured 10 such players, 41.6 percent of the Patriots’ lineup.

The Seahawks rely somewhat less on the draft’s seven rounds than most teams, but also do better than most with the picks they make, particularly in the middle rounds. Schneider and Carroll have 11 opportunities to extend that success Friday and Saturday.

Where The Seahawks Will Pick

The Seahawks have twice held the 63rd overall pick. In 1978, they selected DB Bob Jury of Pittsburgh (played 15 games) and in 2006 picked DT Darryl Tapp of Virginia Tech (30 games).