With a heavy lift of Commissioner Roger Goodell, All-America DT Danny Shelton celebrated his first-round selection, and was joined by two Huskies teammates. 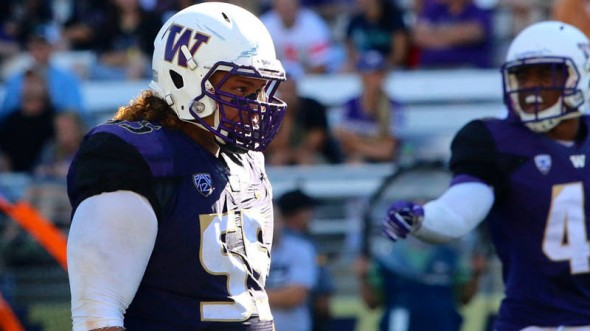 Danny Shelton was taken by Cleveland in the first round of the NFL draft. / University of Washington athletics

In his first moments as an NFL player Thursday night, Danny Shelton flirted with a fine for violating the league’s commissioner-abuse policy. He bear-hugged Roger Goodell, then hoisted him off the floor at the theater in Chicago, eliciting gasps, cheers and an astonished chuckle from Goodell, who by now should be used to taking hits.

Those of us who followed Shelton’s career at the University of Washington were hoping that he would finish with Goodell in a barrel roll, the stunt he perpetrated in the Apple Cup. Shelton would have been a hero to many, but Dawg-on-dog crime may have cost his team 15 yards.

That team is the Cleveland Browns, which, along with the Chicago Bears at No. 9, had been forecasted by many to be Shelton’s likeliest destination. In an evening free of Seahawks-related doings — they traded out of the first round in March to acquire TE Jimmy Graham — the Browns, the NFL’s worst against the rush in 2014, provided the draft’s local flavor by taking the first-team All-America defensive tackle with the 12th pick in the first round.

Not long after Shelton’s selection, one-time teammate Marcus Peters was taken 18th by Kansas City. Peters, thrown off the team in midseason by new coach Chris Petersen for confronting coaches as well as a bad attitude, worked his way back into good graces by taking the blame for his misbehavior.

Then in a bit of a surprise, Carolina chose a third ex-Huskies defender, LB Shaq Thompson, with the 25th pick. The three first-round selections are a Washington record.

Shelton and Peters became the first pair of Huskies taken in the opening round since 1995, when RB Napoleon Kaufman went 18th to Oakland and TE Mark Bruener went 27th to Pittsburgh.

Not to anyone who watched him the last couple of seasons. The Auburn High School grad, 6-foot-2 and 340 pounds, had 93 tackles last season, including 16.5 tackles and nine sacks.

More impressively, he was a first-team academic All-America, the first Washington player so honored since 1991, and the nation’s only player to get academic and football recognition as an All-America.

He also prevailed through personal travail. His older brother, Shennon, was killed in a shooting in Auburn four years ago. A button showing a picture of Shennon adorned his shirt.

“I know my brother’s watching from up above,” he said.

He goes to a Browns team that finished last in the AFC North (7-9) after losing its final five games, in large part by allowing a league-worst 141.6 rushing yards per game. On three occasions, Cleveland surrendered more than 200 yards a game.

Defensive coordinator Jim O’Neil said in a recent interview that the Browns would earn the right to rush the passer by improving their run defense. Shelton would be a quality fit —  USC’s Leonard Williams, taken sixth by the New York Jets, was the only interior lineman taken ahead of Shelton in the 2015 class.

The only knock on Shelton’s game was what he called a “misunderstanding” about his pass-rush ability.

“I had a lot of opportunities at University of Washington, but I definitely showed this past season that I’m a three-down guy, a four-down guy,” Shelton said in a recent interview. “I’m definitely going to add to the pass-rushing game. We just had I-don’t-know-how-many top-notch players on the defense, and so it was always a competition trying to get sacks. I’m going to be improving on my pass rushing and continuing to strive to be the best.”

Peters, a 6-foot, 190-pound junior from Oakland who has been mentored by Seahawks RB Marshawn Lynch, was the third defensive back taken, and many believed he was the most talented one in the draft. But his clashes with coaches, including a one-game suspension for a sideline outburst in the home opener against Eastern Washington, figured to register some red flags. Then again, red is the Chiefs’ color.

“I don’t blame (Petersen) for anything. All I can blame is myself, because I made those decisions and I have to live with them,” Peters told USA Today. “Now I’ll have to man up and I’ve got to answer these questions in interviews, and all I can do is sit there and answer truthfully and honestly.”

Thompson, 6 feet and 228 pounds from Sacramento, was voted the nation’s most versatile player as he starred as a linebacker/safety on defense and a running back on offense. He scored two TDs as a running back and four on defense (one interception return and three fumble returns).

Carolina, which already has a strong defense, likely sees Thompson as a safety, although Thomas Davis, the NFL’s Walter Payton Man of the Year award winner, is 32, and may have introduced his successor — he was invited to the Chicago podium to announce Thompson’s selection.

Thursday turned into an all-time day for Washington at the NFL draft. Friday and Saturday, it’s the Seahawks’ turn.