Only the 2014 U.S. Open at Pinehurst No. 2 had more qualifying entries accepted by the USGA than this year’s major at Chambers Bay in University Place. 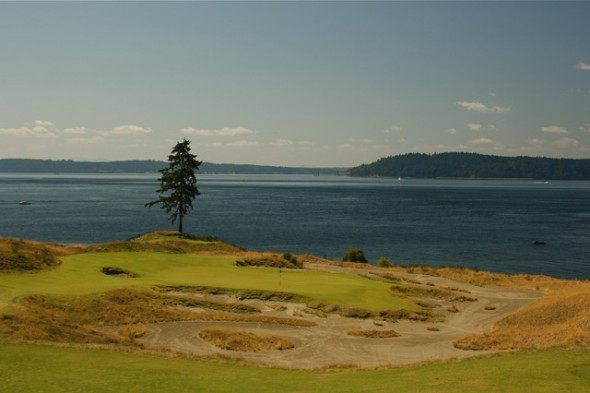 Chambers Bay in Tacoma will become a global sports landmark when it hosts the U.S. Open in June. / Chambers Bay

“We are thrilled with the interest demonstrated by the 9,882 entries, the most we have ever accepted for a U.S. Open held on the West Coast,” said Diana Murphy, USGA vice president and chairman of the Championship Committee. “That Chambers Bay, a public course which has never held an Open, could have this kind of impact proves that our national championship knows no state, regional or national bounds.”

To be eligible, a golfer has to either be a professional or have a handicap not exceeding 1.4.

This will mark the 115th U.S. Open and fifth consecutive year only online entries were accepted.

Here’s the list of the 49 golfers granted exemption, as of Wednesday. The list will expand May 25 and perhaps June 15 when the top 60 points leaders in the World Golf Rankings, ties included, earn a spot — as do the winners of The Players Championship (May 7-10) and European Tour BMW PGA Championship (May 21-24).

If there was any lingering doubt, Tiger Woods announced earlier this week on Twitter he will play in the U.S. Open.

See you at the US Open, Open Champ, Memorial, Greenbrier and my Foundation’s event, the Quicken Loans National. Going to be a busy summer.

USGA executive director Mike Davis was right earlier this week when he predicted that some PGA tour players would complain or “chirp” about Chambers Bay, a links course not typical of a traditional U.S. Open venue.

Ian Poulter, never shy to share his opinion, was the first to publicly criticize, anonymously citing fellow tour pros that didn’t enjoy their experience at Chambers.

Well several players have played Chambers Bay in prep for US Open. The reports back are it’s a complete farce. I guess someone has to win.